How Obama Political Aides Get Preference Over Veterans for Government Jobs 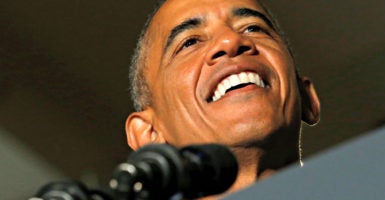 A disabled veteran didn’t get a job he sought in a federal agency, although he was qualified for the position and was supposed to receive preference. The job went instead to a political appointee of the Obama administration.

“Hiring decisions must be free from political interference, legitimate, and justified,” @jasoninthehouse says.

This was just one instance in which a nonpartisan government investigation found agencies didn’t follow the rules in hiring one-fourth of all the President Barack Obama political appointees who will be settled in career posts after a new president is sworn in Jan. 20.

One Senate committee chairman said the Obama administration’s failure to follow procedures is “troubling,” while another said the administration “should ensure fairness and competition” in filling jobs.

The disabled veteran applied for a job at the Federal Deposit Insurance Corporation.

That FDIC was supposed to get approval from the Office of Personnel Management, which oversees the federal workforce, before passing over the veteran in March 2010 in favor of the Obama appointee. The personnel agency has purview over “burrowing,” the term generally used to describe a political appointee moving to a career position in the civil service.

Noting that disabled veterans have preference for federal jobs under the law, the Office of Personnel Management in May 2011 flagged the case and “subsequently instructed FDIC to take several corrective actions,” according to a Government Accountability Office report.

Ultimately, however, the office approved the political appointee’s transition to the career job, the report says.

Although political appointees are allowed to make the transition to career federal jobs, under the law they are supposed to go through the same merit-based selection process as other applicants.

The GAO determined that federal agencies didn’t follow procedures to avoid favoritism in hiring a quarter of Obama’s political appointees for career positions. The report sampled the actions of 30 federal agencies in such “conversions” from Jan. 1, 2010, to Oct. 1, 2015.

“The practice of burrowing in threatens the integrity of the federal workforce, where employees need to be hired based on merit and not on partisan political beliefs,” Sen. Ron Johnson, R-Wis., chairman of the Homeland Security and Governmental Affairs Committee, said in a statement.

“I was particularly disappointed to see the Department of Homeland Security reporting the highest number of appointee-to-career employee conversions,” Johnson said. “It is critical that the administration take steps to ensure fairness and competition in federal service.”

Unlike political appointees, federal workers in the civil service system are hired through a merit system, are difficult to fire, and carry over in changes of administrations, Republican or Democrat.

In other cases, the GAO report says:

• The Department of Education in March 2011 “gave the political appointee an unfair advantage in the hiring process by manipulating the requirements of the career position to align with the employee’s background.”

• In April 2012, the Department of Health and Human Services hired a political appointee “who did not qualify” and “improperly” removed from consideration an applicant with a veterans preference.

• The Food and Drug Administration in December 2012 “applied an overly restrictive definition of specialized experience” that screened out two qualified applicants with veterans preference status before selecting a political appointee.

The GAO, reviewing the 30 federal agencies, found 69 individuals moved from political to career positions over the five years. These agencies did not always get the necessary final approval from the Office of Personnel Management, the report says:

Specifically, 14 of the 30 agencies reported numbers of political conversions to GAO that were different from the numbers that OPM reported to GAO. In most cases, the differences in the two data submissions were off by one conversion except at two agencies—the departments of Homeland Security and Commerce—where they were off by six and two conversions, respectively.

Six Cabinet-level departments and another agency accounted for almost half of the conversions of political appointees to civil service jobs, according to the report. Homeland Security had nine, Justice had seven, Defense and Treasury had five each, and Health and Human Services and the FDIC had four each.

It took the Office of Personnel Management about one year to identify conversions it should have reviewed, the report says.

Occasionally, an OPM spokeswoman said, agencies move political appointees into career posts without first submitting the change to the personnel agency for review. These transitions can slip past the proper review process.

“Each year, some cases are not submitted to OPM for pre-appointment review,” the spokeswoman told The Daily Signal in an email, adding:

The FDIC has not responded to phone and email inquiries from The Daily Signal regarding the specific case of the disabled veteran who was denied a job later given to a political appointee.

“One of the reasons the federal government has laws on merit-based hiring is to prevent cronyism and political favoritism,” Thune said in a statement. “GAO’s finding that the Obama administration hasn’t consistently followed these rules is troubling.”

In some cases when the Office of Personnel Management determined an agency didn’t follow the rules, it reopened a hiring decision for other applicants, according to the GAO report. In other cases, the personnel office referred the matter for investigation by the U.S. Office of Special Counsel, an independent investigative agency that primarily safeguards the merit system and government whistleblowers.

The Daily Signal has sought comment from the Office of Personnel Management, which said it would be forthcoming.

About 3,200 political appointees are among the 2.69 million nonmilitary employees of the executive branch. Of those 3,200, 158 were Bill Clinton appointees and 135 were George W. Bush appointees, according to a Congressional Research Service report.

A similar GAO report in June 2010 reviewed conversions to civil service jobs that occurred from May 2005 to May 2009—most of which came under the second term of the Bush administration. It also found lapses in adhering to policy.

Democrats raised significant concerns about conversions in 2008, the final year of the Bush administration, which saw about 26.

In 1883, Congress passed the Pendleton Civil Service Reform Act  to stop raw political appointments, known as the spoils system, from filling all federal government jobs. The law introduced the merit system to hiring practices and made numerous positions untouchable once filled.

Civil service law has been updated several times, but the basics remain the same. The law requires that most federal employees be hired based on skills, knowledge, and ability. The law prohibits favoritism.

Samuel Schumach, press secretary for the Office of Personnel Management, previously told The Daily Signal the agency doesn’t have a way to determine how many Obama political appointees have or will apply for civil service employment. But summarizing the process, he said in an email:

The GAO report found that officials did not follow the procedure described by Schumach in one-fourth of the cases reviewed.

“Hiring decisions must be free from political interference, legitimate, and justified,” Oversight Chairman Jason Chaffetz, R-Utah, said in a statement. “OPM should fully embrace GAO’s recommendation for a more stringent process to verify all conversions are appropriate. Fair and open competition is central to the integrity of a merit-based federal workforce.”