Why Virginia’s ‘Reasonable’ Voter ID Law Could Survive the Courts 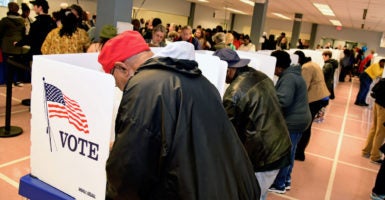 Virginia Republicans are making the case that this state’s voter identification law is different than versions in other states that came and failed before it.

“We like our facts; we have better facts than some of other cases that have struggled in court,” said Del. Robert B. Bell, a state Republican legislator. “That’s why we believe this result will be different than the outcome in other states.”

With election day less than a month away, the U.S. Court of Appeals for the 4th Circuit is still reviewing the merits of Virginia’s law requiring citizens to produce photo identification to vote.

The outcome of the court case will almost certainly not impact voting in 2016, the first year the voter identification law will be in place during a presidential election.

Even if the appeals court were to rule against the law, passed in 2012 by a Republican-controlled legislature, it is too close to Election Day to undo the law’s implementation, elections experts say. Indeed, in-person absentee voting has already begun in Virginia.

Yet even so, with the case being reviewed under the shadow of recent court rulings against voter identification laws, Virginia Republicans and elections experts say the fate of this state’s law—especially if the court lets it stand—will impact how states approach the issue of voting rights in the future.

“Obviously many states are trying to find a way to do voter ID in a way that passes judicial muster,” Bell told The Daily Signal in an interview. “We believe we were careful with ours based on recent precedent at the time we passed it. Hopefully, the court will say we complied with the constitutional requirements, and other states can look to Virginia as a way to prevent voter fraud in a fair, reasonable way.”

“Hopefully other states can look to Virginia as a way to prevent voter fraud in a fair, reasonable way,” says @DelRBell.

This summer, other states also saw their voter identification laws weakened or blocked in court, including Texas, Wisconsin, and North Dakota.

While the judges on the appeals panel—all appointed by Republican presidents—are different than the ones who reviewed North Carolina’s law, Virginia’s version is facing similar scrutiny.

In May, U.S. District Judge Henry E. Hudson upheld Virginia’s voter identification requirement, writing that the state “has provided all of its citizens with an equal opportunity to participate in the electoral process.”

The Democratic Party of Virginia and affected voters—the plaintiffs in the case—appealed to the 4th Circuit.

During Sept. 22 oral arguments before the appeals court, one judge on the panel, Dennis W. Shedd, made a comparison to North Carolina.

“Is what Virginia did just as egregious?” Shedd asked the attorney for the state Democratic Party that is challenging Virginia’s photo identification requirement. “Is the evidence of intentional discrimination as strong?” But experts, and individuals who devised Virginia’s law, say it is different from North Carolina’s law in a few ways.

For one thing, Virginia’s law passed the Legislature prior to the time considered to be a turning point in election laws, when the Supreme Court in 2013 struck down a section of the Voting Rights Act of 1965.

That decision eliminated the requirement that states with a history of racial discrimination—Virginia was considered to be one of those states—seeking to change election procedures have to get federal court approval to do so.

In addition, proponents and experts note that Virginia’s law is more flexible than voting restrictions in other states, and that this attempt to limit the burdens on voters shows that legislators did not have a discriminatory intent.

“This case comes at the court with a different posture than the North Carolina case,” said Rebecca Green, the co-director of the Election Law Program at the College of William & Mary in Virginia. “It doesn’t seem there’s as much evidence of intent in the Virginia case,” Green told The Daily Signal in an interview.

‘A Testament to Insanity’

State Sen. Mark D. Obenshain, a Republican who helped write Virginia’s voter identification law, says he’s been motivated to toughen voter identification requirements ever since the 2000 presidential election recount in Florida, when paranoia about the integrity of the U.S. election system had increased.

In 2005, a year after taking office, Obenshain introduced his first version of a voter identification law, which went nowhere. He “tried and tried” again over the years to address the issue, but kept failing to get different iterations of his bill passed, he says, due to resistance from Democrats and others, who argued the measure would challenge the most vulnerable of potential voters, including minorities, the poor, and the elderly.

To attract enough support, Obenshain said he and other bill supporters created a number of workarounds to help people who don’t have access to a driver’s license, the most common form of photo identification.

Voters who don’t have one of the approved forms of identification on Election Day can fill out a provisional ballot. The state also issues free voter identification to people who present themselves to their local registrar. Those people do not have to provide supporting documentation, like a birth certificate, to prove they are a citizen.

“We benefited from not being at the leading edge of the wave, being able to learn from what states did right, and some states did wrong,” Obenshain says. “And so what we did is this: Nothing we have done has placed a burden on any voter who really wants to vote. The burden to vote is essentially nonexistent in Virginia. The three principles that are really important to preserve in a system of elections is we need it to be free, open, and fair. It has to be all three. To have a free and open, but unfair, system of elections will do us no good.”

Democrats and others who oppose the Virginia law acknowledge the workarounds are helpful.

But they contend that any extra restriction a state imposes on voting will have a disenfranchising impact. They cite studies that show the rarity of in-person voter fraud, and say Republicans are intentionally trying to overstate a problem in order to deter Democratic constituencies from voting.

“When I vote for legislation, it is really important to me that the problem we are trying to fix is well defined and accounted for, and that is just not the case with voter fraud,” state Sen. Barbara Favola, a Democrat, said in an interview with The Daily Signal. “Voting should be made as easy as possible, and elections should affect the widest swath of people. I believe that some of the proponents of the bill really wanted to limit participation in voting because they were trying to fix a problem that didn’t exist.”

Favola also described the challenges in reaching poorer voters, who may not understand the nuances of Virginia’s voter identification law, and will be discouraged from trying to meet its requirements.

“When you pass a law, there’s always a public message there,” Favola said. “The public message when you pass this law is you better prove yourself if you want to vote. So people who are always knocked down by the system say to themselves, ‘Why bother? This is another barrier to accessing the system.’ So that’s a real struggle.”

“Voting should be made as easy as possible, and elections should affect the widest swath of people,” says @BarbaraFavola.

Republicans like Bell and Obenshain counter that even if in-person voting fraud is rare, recent events have threatened the integrity of the election system, and warrant efforts to tighten voting procedures.

Last month, The Washington Post reported that the FBI and local police are investigating how least 19 dead Virginians were recently re-registered to vote in the state. No one actually casted a vote in the names of the dead.

Meanwhile, at the national level, the Obama administration last week accused the Russian government of interfering with the U.S. elections process by hacking emails of the Democratic National Committee, and other institutions and individuals.

Green, the William & Mary elections expert, said this context is important in evaluating the appropriateness of voter identification laws.

“Particularly in a year when there is talk of elections being rigged, and voter confidence in the election system is of such importance, it could be that having people go through extra steps to vote is helpful,” Green said. “But it’s a hard balance. It depends on what you care more about—reducing burdens on voting or taking steps that may or may not shore up the system, and unfortunately, those two values can clash.”