The All-Out Assault on the First Amendment 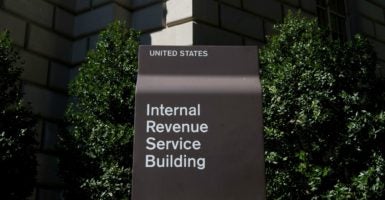 As a result of the IRS inappropriately targeting conservative organizations because of their “disfavored viewpoints,” they were subjected to long delays, investigations, and intrusive and unjustified interrogations about their opinions, views, members, and practices. (Photo: Bill Clark/CQ Roll Call/Newscom)

The Constitution has long been subject to attacks from individuals hostile to its guarantees of freedom, economic opportunity, and limited government, but in recent days no other provision has been as widely and intensely attacked as the First Amendment.

From the IRS targeting conservative groups to those trying to limit the ability of Americans to freely practice their religious beliefs, to membership organizations being forced to disclose their donors, the First Amendment is being assaulted on all sides.

Americans are familiar with the recent attacks on religious liberty, present in everything from forcing religious business owners to offer abortion-inducing drugs and perform same-sex wedding services that violate their fundamental beliefs to the exclusion of churches from secular public projects.

Cases questioning the government’s encroachment on religious liberty continue to come before the U.S. Supreme Court, as seen in Zubik v. Burwell last term and potentially Trinity Lutheran Church v. Pauley this term, which deals with a church’s exclusion from public funding for construction of a playground.

The First Amendment has also been caught in the crosshairs of a battle between the IRS and various conservative organizations. As a result of the IRS inappropriately targeting conservative organizations because of their “disfavored viewpoints,” they were subjected to long delays, investigations, and intrusive and unjustified interrogations about their opinions, views, members, and practices.

As a federal appeals court recently said, the IRS “utterly failed” to apply “the tax law with integrity and fairness.” Instead, its behavior was a “blatant violation of the First Amendment.”

This abuse of governmental power against organizations with a conservative and traditional view of the Constitution, culture, and government policy does not bode well for protection of free speech and freedom of association.  Neither does the continual push to overturn the Supreme Court’s 2010 decision in Citizens United, which restored vital First Amendment rights that had been limited by unconstitutional campaign finance laws.

Nor does the aggressive move by certain state attorneys general to criminalize scientific dissent by initiating criminal investigations targeting companies and others who disagree with the unproven theory of catastrophic, man-made global warming.

And, of course, the attacks on freedom of speech are most prevalent on college campuses, as speech codes and safe spaces abound. These attacks are evident in “speech zones,” which restrict free speech activities to only a small area of campus, and “speech codes,” which include broad anti-harassment policies frequently construed to limit speech on the basis of content or viewpoints that are not politically correct.

These policies are starkly at odds with the First Amendment, yet students are often some of the staunchest defenders of these misguided and unconstitutional policies, and the administrations follow suit.

This was most recently demonstrated in a University of Virginia professor’s forced leave of absence for engaging in classic First Amendment activity—posting a comment critical of the Black Lives Matter movement on Facebook.

The backlash from students and administrators alike resulted in his swift removal. Ironically, the great damage being done to college students’ First Amendment rights is self-inflicted, as they advocate for further restrictions of their own rights and the rights of others.

All of these attacks on the freedoms guaranteed by the First Amendment will be discussed at The Heritage Foundation on Thursday, Oct. 13, in its fifth “Preserve the Constitution” event. It can be watched online or attended in person.

“The All-Out Assault on the First Amendment: Restricting Speech, Religion, and Association” will start at noon and feature four of the country’s leading experts on the First Amendment, including Christina Hoff Sommers of the American Enterprise Institute; Robert Alt, president of the Buckeye Institute; John Eastman of the Chapman University Fowler School of Law; and Cleta Mitchell, a partner at Foley & Lardner.