No Mass Exodus Out of RSC for Freedom Caucus Members 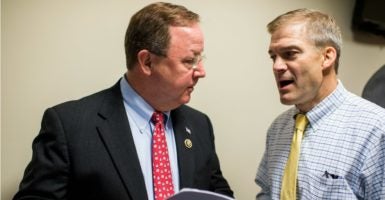 The number of Freedom Caucus members considering an exodus from the Republican Study Committee has dwindled to just a handful of lawmakers, according to a comprehensive Daily Signal survey.

That healthy prognosis comes little more than a month after Freedom Caucus members began talking openly of a breakup between the two influential conservative groups, and it could signal continued cooperation between them when the next Congress convenes.

The aftershock of a more significant breakup of the two groups threatened to shake up the conservative bloc in Congress. Though distinct, the Freedom Caucus and RSC share members, sometimes coordinate on policy fights, and make up the majority of the Republican conference.

But the threat of an exodus has greatly diminished.

While the somewhat-secretive Freedom Caucus declines to make its membership roster public, The Daily Signal confirmed that 38 lawmakers belong to the group and only four of those members have decided to sever their connection with the RSC.

Reps. Justin Amash of Michigan, Mo Brooks of Alabama, Mark Meadows of North Carolina, and Mick Mulvaney of South Carolina plan to leave the RSC, The Daily Signal has confirmed.

Eight Freedom Caucus members either didn’t respond or declined to comment. Another six are either retiring or lost their seats in a primary.

The four leaving cited time commitments rather than ideological differences as their reasons. Brooks, in particular, told The Daily Signal he’s leaving because he’s uncomfortable using money from his campaign account to pay for lunch at the group’s weekly policy briefings.

“That money I solicited from people in my district was for campaign purposes, not eating purposes,” Brooks told The Daily Signal.

Membership in the RSC costs more than lunch and the group provides more than catering. Annual dues cost $5,000 and in return the 176 Republican members of the biggest conservative caucus in Congress receive comprehensive policy analysis of every bill that comes up for a vote.

RSC Chairman Bill Flores, R-Texas, said he expects the group to continue to pull the conference to the right and that membership remains consistent among lawmakers “who are expected to return from Congress.”

“Our unique position as a robust, conservative, and positive solutions-oriented organization gives me great confidence that the RSC will be well-positioned in the 115th Congress,” Flores wrote in a statement to The Daily Signal, “to continue to advocate a conservative agenda through its member-driven solutions, outstanding policy research, broad coalitions, and solid messaging.”

That could signal the end of an occasionally tense relationship between the two groups.

Increased RSC renewals from Freedom Caucus members could also be a result of Rep. Andy Harris’, R-Md., bid to succeed Flores as the group’s next chairman.

A member of both Freedom Caucus and the RSC, Harris has built his campaign on healing any rift between the groups.

“You have [Freedom Caucus] members publicly coming out and saying that they no longer believe the RSC is a conservative vehicle for change in Congress,” Harris told The Daily Signal in his first interview since launching his campaign. “I want to change that opinion.”

By whipping members for support, the Maryland doctor is likely driving renewals because, in order to vote in the RSC chairman election, lawmakers must first re-up membership.

Harris, who is running against Rep. Mark Walker, R-N.C., received the recommendation of the former RSC chairs.

Walker, who isn’t a Freedom Caucus member but is popular in many conservative circles, rejected the idea that the groups were at odds.

“[There is] no rivalry,” Walker tweeted, “They can be complementary. RSC is best when members coalesce around ideas and work toward clear conservative objectives.”

The Freedom Caucus was formed January 2015 by members who believed that the bigger RSC had lost its vision and after Flores defeated Mulvaney to become chairman.

Since then, though, size and tactics—not ideology—have distinguished the groups.

With 176 members, the RSC is the largest conservative caucus in Congress and the group often uses its weight behind the scenes during negotiations. With around 40 members, the nimble Freedom Caucus prefers more public showdowns with Republican leadership.

Freedom Caucus ranks will constrict when the next Congress convenes.

Six of its members—Reps. Marlin Stutzman of Indiana, Matthew Salmon of Arizona, Cynthia Lummis of Wyoming, Tim Huelskamp of Kansas, John Fleming of Louisiana, and Curt Clawson of Florida—will retire at the end of the year.