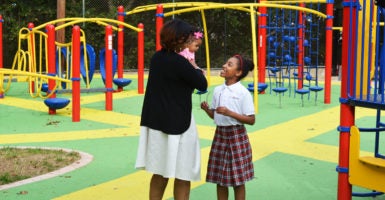 Aniyah Maddox, a third-grader at Achievement Prep in Washington, D.C., gets picked up from school by her mother and 8-month-old little sister on Oct. 5, 2016. (Photo: Kelsey Harkness/The Daily Signal)

Twenty minutes outside the U.S. Capitol, 10-year-old Aniyah Maddox gets ready for school in one of the poorest neighborhoods in the District of Columbia.

She puts on her uniform—a pleated skirt that falls below her knees, socks, shoes, and a white collared shirt—and says goodbye to her 8-month-old sister, whom she begged her mother to have.

At the charter school Aniyah attends, she’s not a student, but a scholar, and already has big dreams of becoming a fashion designer, a singer, or a lawyer. Right now, she can’t decide.

Smiling on the playground with a red bow on her head, Aniyah is oblivious to the challenges she faces growing up in a historically disadvantaged urban neighborhood.

Her mother, Shadija Maddox, is just the opposite. She’s aware that the median yearly income in Ward 8, cluster 39, hovers around $30,000, and that less than 20 percent of residents hold a bachelor’s degree or higher. For that reason, she doesn’t cut Aniyah any slack.

“She has to go to college,” Maddox said, with a serious tone in her voice. “What you decide to do after that, hey, travel the world. But you have to make sure you complete your education so you can get to college and do it well.” Maddox, a native of Prince George’s County, holds a bachelor’s degree and expects her children to do the same. She never intended on enrolling Aniyah in a charter school, but with Ward 8’s poor achievement records, it was the only option.

Achievement Prep is one of the District’s highest performing public charter schools serving 1,000 students in preschool through the eighth grade. Built on top of a hill overlooking Ward 8, the new, beautifully designed campus stands as a beacon of hope in a place where at times, it feels like there is none. For security reasons, the entire campus is surrounded by gates. Crime and violence in Ward 8 are rampant, and half of all children live in poverty.

As a public charter school, Achievement Prep is run with public funds and is tuition-free for all students. Its operators, however, are private and are given the freedom to be more innovative with decisions involving curriculum, culture, budget, hiring, and firing.

Students—or scholars, as they’re formally called—outperform traditional public schools in Ward 8 by as much as 40 points on standardized tests. Overall, test results are competitive with students in the city’s most affluent neighborhoods, such as Georgetown.

In other urban areas such as Boston, Newark, and New York City, charter schools have shown a remarkable ability to outperform traditional public schools and close the achievement gap between white and black students.

However, not every charter school is the same, and some can’t boast such accomplishments. Fort Worth, Phoenix, and Las Vegas charter schools, for example, are all struggling to outperform their district counterparts, according to one study.

But despite these statistics, groups like the NAACP and Black Lives Matter are saying charter schools are hurting African-Americans, and that they should cease to exist. A housing community directly across the street from Achievement Prep in Ward 8 of Washington, D.C.

The Fight Against Charter Schools

This summer, both the NAACP and Black Lives Matter called for a moratorium—or an immediate halt—on all charter school growth across the U.S.

“These same students, instead, are subject to increased police violence, disproportionate suspensions and expulsions, and are likely to be pushed out of school all together. Generations of black students are sent out into the world, unprepared for the realities of a shrinking job market, increasing gentrification of the neighborhoods, and the high costs of higher education.”

In July, the NAACP called for a “moratorium on the proliferation of privately managed charter schools,” arguing that charter schools have “weak oversight” and put schools in low-income communities “at great risk.” This month, the group’s board members will vote on whether to make that policy final.

Those who are against charter schools argue they take away much-needed funding from public schools that desperately need it, and are part of a national attempt to privatize education.

Already, black community leaders have pushed back, asking for the NAACP and Black Lives Matter to reverse their positions.

On Sept. 21, a coalition, organized by the Black Alliance for Educational Options and the National Alliance for Public Charter Schools, sent a letter to NAACP board members on behalf of “700,000 black families choosing to send their children to charter public schools, and the tens of thousands more who are still on waiting lists.”

Shortly after, black charter school parents have launched their own letter urging the NAACP to change its mind.

Chris Stewart, a charter school advocate from Minneapolis, is one of the 160 black education and community leaders to organize against the NAACP’s anti-charter school policies.

“I think we’re witnessing a great organizing effort on the part of the folks who are really trying to defend traditional public schools from any type of competition,” Stewart told The Daily Signal on the phone. “That organizing effort has been going on for years, it’s starting to take root now in these types of high-profile, public media spectacles.”

Stewart blames teachers unions, their allies, and their “billionaires” for co-opting a platform he doesn’t think truly represents the needs or wants of black families.

“If you look at almost everybody connected, they’re grantees of a very specific set of funders, unions, and organizers.”

The Daily Signal requested interviews with Black Lives Matter and the NAACP, but neither organization responded.

For Stewart, the battle is personal, having enrolled his own son into a charter school. “My child is not your money,” he said, adding:

My child is actually my child. We call it per-pupil income because that income is supposed to be for the pupil and if my pupil needs to be in a better educational setting, I don’t think it’s morally justified for anybody to reframe the argument to being about the system, especially when the system has done such a poor job of educating black and brown children for decades.

After “desperately” searching for an alternative to the traditional public school in his district when his son was in the sixth grade, Stewart found a charter school, and since then, hasn’t turned back.

“I was clearly a parent that looked for a school alternative not knowing whether it was going to be a charter school or another kind of school, I just needed options,” Stewart said. “For anybody to cut off some of the pathways that I would have had at the time, for me would have been a threat to my family.”

‘Failing for Some Time’

Despite disagreeing with their platform on charter schools, Maddox openly supports the Black Lives Matter movement.

“Black Lives Matter tries to shed some light on the unfortunate situations that have been happening in African-American communities long before I was born, and I’m 32,” she said. Maddox says that although she knows the fight over charter schools is political, she’s simply trying to get her daughters a good education.

Maddox doesn’t necessarily blame the movement for taking a position against charter schools, but said the platforms could be counterproductive to families like her own.

“I can’t speak for them because I’m not the one who made the statements, but they probably are making the statements because the public schools are suffering,” Maddox, Aniyah’s mother, said. “They feel like you should be able to attend a public school in your area and receive the same quality education that you would if you were living in a predominately white neighborhood.”

In a perfect world, Maddox said she would send both her children to public schools in Ward 8. But the reality is, with her oldest daughter already 10, she doesn’t have time to wait.

“The public schools in D.C. didn’t just start failing,” she said. “They’ve been failing for some time.”

If she could tell the NAACP and Black Lives Matter movement one thing about their education platforms, it’d be this: “They need to understand that the charter schools are bringing the education that those students in that area need in order to succeed, especially here.” Stewart, on the other hand, isn’t so understanding of the movements’ positions. And with the board set to vote on the education platform Saturday, Oct. 15, time is running out to convince them to change their minds.

“The NAACP, to date, has expressed zero interest in responding to most of the requests for meetings,” he said, referencing to the letter where 160 black education and community leaders requested a meeting to discuss the issue.

And as for Black Lives Matter, added:

If they’re successful, Black Lives Matter and the NAACP will stop any future charter school from being allowed to open. It’s an uphill battle to climb, with conservatives and even some Democrats supporting school choice. But for mothers like Maddox, who hopes to one day send her 8-month-old daughter to the same charter school as Aniyah, it could have very real effects.

“The charter schools have to be here because the public schools are failing,” she said. “And no one has time to wait for their child to receive the education that they need.”