Obama Is Restarting the Mars Program He Canceled 8 Years Ago 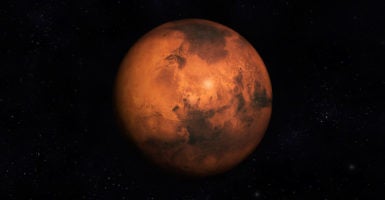 President Barack Obama will restart NASA’s mission to Mars after he effectively canceled the program eight years ago, according to an op-ed he wrote.

Obama’s op-ed calls for NASA to send humans to Mars by 2030, but Obama has a long history of slashing programs that would have sent America to Mars much sooner.

“We have set a clear goal vital to the next chapter of America’s story in space: sending humans to Mars by the 2030s and returning them safely to Earth, with the ultimate ambition to one day remain there for an extended time,” Obama wrote in an opinion piece on CNN Tuesday. “Getting to Mars will require continued cooperation between government and private innovators, and we’re already well on our way.”

Experts blame Obama for shutting down NASA’s plans to send astronauts to Mars in favor of having the space agency fund global warming research and outreach programs. Before Obama took office, NASA had sent a steady stream of missions to Mars, but the agency has been forced to scale back to only one more planned mission, the Mars 2020 rover.

“For nearly eight years, President Obama’s space policy has lacked specificity—basically we will go somewhere, sometime on a vehicle,” said Texas Republican Rep. Brian Babin, chairman of the House Subcommittee on Space. “A swan song op-ed on space in the waning days of his administration cannot make amends for an administration space budget that always came up short and had to give up scarce dollars to fund his global warming agenda.”

Obama’s NASA budget shifted money from the exploration and robotics programs to its environmental sciences and “outreach” programs. Because of this focus, Obama’s budget cuts every part to NASA’s planetary science programs, technological development programs and many important future Mars missions managed to not save any money.

“Actions always speak louder than words, and while his words now about going to Mars are encouraging, they are about eight years too late,” Babin said. “Even so, his last budget falls short of providing the funds necessary to put NASA on the pathway he suggests in his op-ed.”

NASA’s budget now includes more than $2 billion for the agency’s Earth Science Mission Directorate, which covers global warming science. The money will be specifically allocated to improve climate modeling, weather prediction, and natural hazard mitigation. In comparison, NASA’s other functions, such as astrophysics and space technology, are only getting $781.5 million and $826.7 million, respectively, in the budget.

The Earth Science Mission Directorate’s goal is to help NASA “meet the challenges of climate and environmental change.” The organization is also responsible for global warming models proven to be inaccurate when checked against actual temperature observations.

Spending on the directorate has increased by 63 percent over the last eight years, making it the largest and fastest growing budget of any NASA science program. Over the same time period, the general NASA budget grew only by 10.6 percent—just enough to account for inflation.

Due to Obama’s policies, NASA can no longer put astronauts into space without Russian cooperation, as the last space shuttle launched five years ago in July after Obama effectively canceled its replacement. As far back as 2007, then-Sen. Obama called for delaying the Constellation program to replace NASA’s space shuttles for five years in order to pay for his education program.

These changes have led to top scientific questions the space agency seeks to answer NASA’s budget justification including, “How are Earth’s climate and the environment changing?” The more typical space questions, such as “Are we alone?” and “How does the universe work?,” were at the very bottom of the list.

Because of these funding shifts, NASA’s plans for Mars and even to return to Earth’s orbit are now largely dependent upon private companies like SpaceX and United Launch Alliance (ULA). SpaceX plans to begin sending its first unmanned Dragon lander to Mars in 2018, followed up by a manned mission in 2024. ULA, a joint venture between defense contractors Boeing and Lockheed Martin, has pledged to beat SpaceX to Mars.

Mars isn’t the only place NASA can’t explore due to budget cuts. Obama even siphoned funding from NASA’s mission to search for life on Jupiter’s moon Europa to pay for more global warming research.

These delays and budget cuts are allowing China to catch up to the space programs of NASA and the U.S. military, causing congressional Republicans and Democrats to blame Obama.