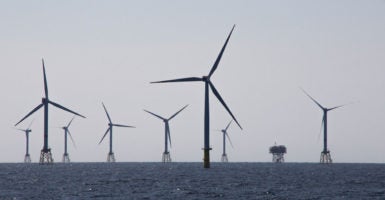 Offshore wind is so pricey that early investors in it, like Germany, plan to stop building new turbines to lower the costs of electricity and prop up its ailing power grid. (Photo: iStock Photos)

America’s first offshore wind power plant will cost about $17,600 dollars to build per home it will power.

Three miles off the coast of Block Island, Rhode Island, the wind farm is supposed to generate enough energy to power 17,000 homes, but will cost $300 million to build five turbines. This cost is just to build the turbines, not to operate them.

The extremely high cost of offshore wind doesn’t worry environmentalists and progressives, however, because, as Salon.com says about the project, “it’s the precedent that counts.”

Despite the extremely high cost, federal officials want to power a whooping 23 million homes with offshore wind by the year 2050.

Offshore wind power is so expensive because installing and maintaining any kind of infrastructure underwater is extremely difficult. The salt water of the ocean is incredibly corrosive and makes operating such facilities difficult and expensive. Electricity is so comparatively cheap in most parts of the country that offshore wind isn’t generally necessary.

Offshore wind is so pricey that early investors in it, like Germany, plan to stop building new turbines to lower the costs of electricity and prop up its ailing power grid.

However, the average American’s electric bill has gone up 10 percent since President Barack Obama took office in January 2009, due to regulations imposed by government officials and taxpayer support for green energy.

Most analysts agree rising residential electricity prices are also harmful to American households. Pricey power disproportionately hurts poorer families and other lower-income groups as the poor tend to spend a higher proportion of their incomes on “basic needs” like power, so any increase in prices hits them the hardest.

As essential goods like electricity become more expensive, the cost of producing goods and services that use electricity increases, effectively raising the price of almost everything. The higher prices are ultimately paid for by consumers, not industries.