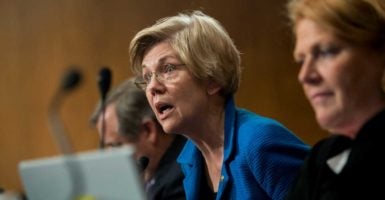 Today, for once, liberty won in a big way.

It would be hard to overstate the importance of the decision by the U.S. Circuit Court of Appeals to strike down as unconstitutional the wholly unaccountable structure of the Consumer Financial Protection Bureau (CFPB).

As a result, CFPB Director Richard Cordray will no longer wield singular control over the entire consumer finance market. The court instead rightfully granted the president the power “to remove the director at will, and to supervise and direct the director.”

The ruling is a major blow to Sen. Elizabeth Warren, D-Mass., who proposed the CFPB in a 2008 law review article and has championed its radical agenda ever since.

The bureau was created in 2010 by the Dodd-Frank Wall Street Reform and Consumer Protection Act, and imbued with unparalleled powers over virtually every consumer financial product and service. Established within the Federal Reserve System, the bureau was designed to operate independently, and with virtually no oversight.

CFPB funding was set by law at a fixed percentage of the Federal Reserve’s operating budget. This budget independence has barred congressional oversight of the agency, and its status within the Fed also precludes presidential oversight. Even the Federal Reserve is statutorily prohibited from “intervening” in bureau affairs.

Banks, mortgage lenders, and other credit establishments have largely cowered before Cordray and his troops, agreeing to nine-figure settlements rather than engage in prolonged litigation.

PHH Corp., however, is the hero of this story. After Cordray unilaterally hiked a fine against the mortgage lender from $6 million to $109 million—despite no demonstration of lawbreaking—the New Jersey company decided to fight back. And it is about time someone did.”

Section 8 has long been interpreted by the federal government to allow companies to engage in captive reinsurance arrangements so long as they pay no more than “reasonable market value” for the reinsurance.

However, the CFPB, one day, decided to reinterpret Section 8—the better to hand out hefty fines to companies such as PHH Corp. In sum, the CFPB unilaterally discarded the government’s long-standing interpretation of the law and imposed its new interpretation retroactively against PHH.

In its legal challenge to Cordray’s action, PHH raised a constitutional objection to the bureau’s entire enforcement proceeding. As chronicled in the majority opinion by Circuit Judge Brett Kavanaugh, PHH asserted that the bureau’s structure violates Article II of the Constitution because it operates as an independent agency headed by a single director.

To comply with Article II, PHH argued, the agency’s director must be removable at will by the president or the bureau must be structured as a multimember commission.

This principle is fundamental to protecting citizens from unchecked government power. As noted by Kavanaugh:

In other words, the president must be able to control subordinate officers in executive agencies. That’s not the case with the CFPB. As the court found, Cordray unilaterally enforces 19 federal statutes, covering every aspect of consumer financial services, and alone decides what rules to issue; how to enforce, when to enforce, and against whom to enforce the law; and what sanctions and penalties to impose on violators of the law.

Congress has created “independent agencies” that do not answer to the White House but which are accountable to commissions or boards of directors—thereby protecting citizens from unconstrained government power.

As the ruling states, “Because the CFPB is an independent agency headed by a single director and not by a multimember commission, the director of the CFPB possesses more unilateral authority—that is, authority to take action on one’s own, subject to no check—than any single commissioner or board member in any other independent agency in the U.S. government. Indeed … the director enjoys more unilateral authority than any other officer in any of the three branches of the U.S. government, other than the president.”

In defense of liberty, the court majority concluded that the concentration of enormous power in a single, unaccountable, unchecked director “not only departs from settled historical practice, but also poses a far greater risk of arbitrary decision-making and abuse of power, and a far greater threat to individual liberty, than does a multimember independent agency.”

There is certainly a solid case to be made for shutting down the CFPB altogether, in which case Congress, if it chooses, could restructure the bureau. However, the court instead settled on a narrower remedy, to wit: sever the unconstitutional provision from the statute and grant the president the power to supervise and direct Cordray (and his successors).

Those are beautiful words for any citizen who holds to the fundamental constitutional principles of limited government. It is actually a good day in Washington, D.C., and God bless PHH Mortgage and its legal team.

This article has been updated to reflect that the CFPB’s fine on PHH Corp. was raised from $6 million to $109 million instead of just “triple” the original dollar amount.