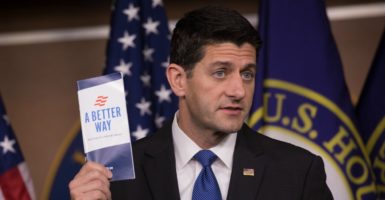 “For insisting the GOP is still a party of ideas,” Paul Ryan made Politico magazine’s annual list of the 50 most influential lawmakers, intellectuals, and leaders in politics.

A year into his job as House speaker, though, the self-described policy wonk has helped generate lots of white papers but few legislative wins.

And while some fellow House conservatives applaud Ryan’s policy agenda, which stakes out Republican positions on everything from poverty to national security, they insist there’s a better way to get conservative reforms into law.

Shortly after picking up the speaker’s gavel, Ryan announced his top priority would be increasing the contrast between Republicans and Democrats.

“The No. 1 goal for the next year,” Ryan said during a Dec. 3 speech in the ornate Great Hall of the Library of Congress, “is for conservatives to put together a complete alternative to the left’s agenda.”

And when asked by The Daily Signal to detail the speaker’s top conservative achievements, Ryan spokeswoman AshLee Strong listed three other House bills that remain mired in the Senate, a controversial fiscal relief package for Puerto Rico, and a vetoed Obamacare repeal bill.

With just 16 legislative days left in 2016, it’s not clear the three House-passed bills will get a vote in the Republican-controlled Senate. Strong would say only that the speaker would “continue to look for ways to move these.”

Back in February, a more verbose Ryan told Fox News Channel’s Megyn Kelly that conservative reforms can happen only with a Republican in the White House, noting that “the problem with divided government is you can’t always get everything you want.”

If Republicans would try sometime, House conservatives respond, they might get what they need, namely legislative wins.

Rep. Jim Jordan, chairman of the influential 40-member Freedom Caucus, acknowledged the challenges presented by an entrenched Democrat minority in the Senate and President Barack Obama in the White House.

“The American people are calling for action, not just ideas,” he said.

“The American people already understand the difference between what the parties stand for,” Jordan said. “What they want to see from Republicans is a willingness to stand firm and get something done.”

Ryan, 46, promises that change is coming and that his “A Better Way” agenda could become law—just not this year.

“Much of this you can do through budget reconciliation,” Ryan said Sept. 30 while clutching a pamphlet for that agenda during his weekly press conference, “and I think the rest of it is something that the vast majority of the American people want to see get done.”

A parliamentary power play, budget reconciliation allows the Senate to pass legislation with a simple majority, rather than the standard 60 votes to avoid a filibuster, if the bill in question is budgetary in nature.

Ryan employed the measure in December while quarterbacking an effort to send a bill repealing Obamacare to the president’s desk for the first time. Obama vetoed the legislation shortly after.

To use budget reconciliation, though, Congress first needs a budget to fund the government, something Republicans failed to deliver this year.

“Ryan’s big thing was returning to regular order on the budget. He couldn’t even do that,” said David Bozell, president of ForAmerica, a conservative group that claims more than 7 million members online.

“Think on that,” Bozell told The Daily Signal. “[Ryan is] a former Budget Committee chairman who couldn’t even pass a budget despite enjoying the biggest majority Republicans have ever had.”

But the lack of a budget isn’t for a lack of trying. For months, Ryan tried to reach consensus on a budget inside the GOP conference.

Negotiations broke down over spending levels negotiated by Ryan’s predecessor, then-Speaker John Boehner, and Obama in October. GOP leadership made it clear that if conservatives wanted policy wins during the funding process they first had to accept higher spending.

Bickering over those spending levels finally derailed a potential budget and set the stage for a series of last-minute votes on government funding.

To the chagrin of conservatives, Ryan’s first year as speaker likely will come to a close when lawmakers pass a spending measure during the lame-duck session, that period after the November election but before the next Congress convenes.

A lack of accomplishments on conservative policy, plus increased spending, has earned Ryan criticism from outside conservative groups. But some conservatives still hold out hope for victories in the next Congress.

“Speaker Ryan has shown himself to be very skilled at cleaning out the barn,” Jason Pye, communications director for the conservative advocacy group FreedomWorks, told The Daily Signal. “But he has to start sowing the seeds of real conservative reform.”