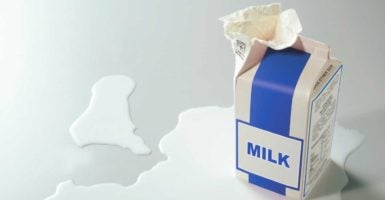 The criminal justice system is utilizing the time, expense, and effort needed to adjudicate a criminal matter in a dispute over a carton of milk. (Photo: Ingram Publishing/Newscom)

That’s right, the criminal justice system is utilizing the time, expense, and effort needed to adjudicate a criminal matter in a dispute over a carton of milk.

The mere fact that an eighth-grader can face a criminal charge for such a minor transgression points to a failed exercise of discretion by both the school administration and the law enforcement official involved in this incident, which can be a significant contributor to overcriminalization—the misuse of criminal laws and penalties to try to solve every problem and punish every mistake.

It’s a “he said, she said” dispute. Turk claims that he picked up his school lunch, but forgot to grab the milk carton that comes with it, so he simply went back to retrieve one on his own. The school resource officer who arrested Turk claims that the student cut the lunch line, stole the milk carton, and concealed it. According to the officer, he then confronted Turk, who returned the milk, then “suggested that [Turk] needed to speak with the principal.”  Turk refused to go, and that’s when he allegedly became disorderly.

Turk claims that “the officer grabbed him by his neck,” while the officer reported that Turk attempted to “push past the officer to get away” upon approaching the principal. What was initially intended to be a trip to the principal’s office resulted in Turk being led away in handcuffs.

To further cast doubt on the legitimacy of the grand milk heist charges, Turk reportedly was enrolled in the school’s free lunch program, so he was entitled to the carton of milk at no cost anyway. In what legal system can someone be charged with two crimes, disorderly conduct and larceny, in an attempt to take something that they are legally entitled to?

Petit larceny occurs when a person takes with intent to permanently deprive “goods and chattels of the value of less than $200″—fair enough, but 65 cents, seriously?

In Virginia, both crimes qualify as Class 1 misdemeanors, which have an authorized punishment of “confinement in jail for not more than twelve months and a fine of not more than $2,500, either or both.” That’s a whole school year, a glut of milk cartons, and far more severe consequences on the line.

Even Old Testament law—not known for treating rule-breakers kindly—provides a more merciful remedy. Proverbs instruct, “People do not despise a thief if he steals to satisfy his appetite when he is hungry, but if he is caught, he will pay sevenfold … ” If valued at its full 65-cent cost, Turk would owe a whopping $4.55 for the sevenfold cost under God’s law. But under Virginia’s law, Turk could be jailed for up to two years and fined $5,000 if convicted of both charges.

In fairness, Turk was offered but refused to accept a punishment outside the court system. His mother said, “My son is not going to admit to something he did not do.” A Prince William County judge has scheduled a trial for November.

Phil Kavits, a spokesman for Prince William County schools, said, “The staff members are well known in our highly diverse community for their dedication and caring approach to all students.”

A lawyer representing Turk, Emmett Robinson, said if an “officer treats kids like they’re criminals, [then] guess what happens—they’re going to become criminals.”

This incident represents an opportunity for Virginia to reassess how school resource officers classify and handle minor instances of “disorderly conduct” in order to better utilize community resources and avoid unnecessarily inserting misbehaving students into the criminal justice system.