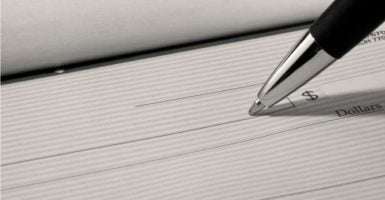 A nonprofit think tank president once found a gutted rabbit outside her house after hockey fans became heated over a local issue her organization engaged with.

“This is a world where sometimes people do crazy things and they get very heated about issues, even sports,” says Darcy Olsen, president and CEO of the Goldwater Institute, a conservative and libertarian public policy think tank based in Phoenix, Arizona.

She was the victim of harassment two years ago, Olsen says, when someone left a decapitated rabbit head on her porch and smeared guts and blood on her front door.

“A couple of years ago, the Goldwater Institute raised concerns about a deal that had been proposed where taxpayers would have essentially bought a local sports team and had to subsidize it to a tune of about $3 million,” Olsen told The Daily Signal. “We ultimately won and the deal was foiled, but during this some of the sports fans were pretty riled up because they were afraid that the team would leave. It was a local issue, but quite intense.”

“During that fight, hockey fans used property tax records to find the home address of [Darcy Olsen], and post it online,” Olsen and Tracie Sharp, president of the State Policy Network, wrote in an op-ed for The Wall Street Journal. “The next day a gutted rabbit was found on her porch and the animal’s blood smeared over her house.” “All Americans have the right to support causes they believe in without fear of harassment or intimidation,” says Olsen.

“All Americans have the right to support causes they believe in without fear of harassment.” —@darcyolsen @GoldwaterInst

Olsen says that transparency in the government should be expected, but private citizens have a right to donate to causes and not be fearful of harassment from those who disagree with their choices.

Five states have laws requiring nonprofits give donor names and addresses to the government, which are then shared publicly online.

In California, Proposition 8, a statewide ballot measure passed in 2008, made marriage only between a man and a woman valid in the state. Proposition 8 passed with roughly 52 percent of the vote. Supporters had been subjected to harassment, blacklisting, and loss of employment.

Missouri, South Dakota, Washington, and Oregon have ballot measures to be voted on in the upcoming election that, if passed, would force nonprofit organizations to report private donor information to the government.

Olsen says private political association and anonymous speech is a “venerated tradition” in the United States.

“In the United States, we have a very rich tradition of free speech and of letting people also speak behind a veil when necessary,” Olsen said. She added:

When you think about the Federalist Papers, for instance, that were written under pseudonyms and a lot of the early papers and pamphlets that were done during the American revolution were done anonymously. … It’s even been argued that the Federalist Papers wouldn’t have been written if the authors had had to use their names because these were such dangerous times and there were people who wanted to shoot the messenger instead of go after the message—that phenomenon exists today.

“Forcing associations to publicly report their supporters to the government will chill speech and diminish free expression in America,” Hans von Spakovsky, a senior legal fellow at The Heritage Foundation, wrote.

Olsen and the State Policy Network’s Sharp wrote in their recent op-ed for The Wall Street Journal:

Nonprofit organizations—like the Sierra Club, Planned Parenthood, National Rifle Association, churches, Boys and Girls Clubs, and art museums—are legally allowed under federal law to take positions on legislative matters that impact their missions, as long as they do not financially or otherwise support candidates for office. Because they are not engaging in candidate campaigns, they are allowed to protect the privacy of their financial supporters.