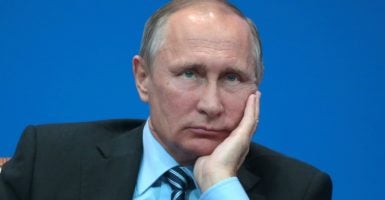 Speculation about Russian interference in the upcoming U.S. presidential election is flowing fast in the U.S. media.

Russia was widely believed to be responsible for embarrassing email hacks at the Democratic National Convention. Speculation abounds in the media that the Russian government might try to throw the U.S. election this way or that with a boldness not even seen during Soviet days.

Speculation is all we have for now, yet, the Russian propagandists may feel they have accomplished quite enough. Sowing confusion in the West and presenting Russia as an innocent victim of U.S. political infighting are key elements in Russia’s information warfare.

On the international front, Russia is no less active. Having honed disinformation skills in the conflict with Ukraine, Russian media are now focused on Syria.

In a through-the-looking-glass maneuver, Russia has accused the United States of bombing Syrian government troops and aiding the Islamic State, while Russia itself that is bombed Syrian civilian targets, including a hospital. This leaves U.S. officials, like Secretary of State John Kerry and United Nations Ambassador Samantha Powers, constantly playing defense.

There is no sign of Russia’s information campaign abating. The campaign has successfully restored Russia as a global player, muscling in where the United States and Europe have faltered.

The key to understanding Russians’ strategy, writes author Keir Giles, a research fellow at Chatham House, is the consistency of Russian strategy over time. In both its use of military force and its use of disinformation, the Kremlin reveals reliance on the past as well as the ability to adapt to new tools, like the internet. And yet for all our experience in dealing with Russian propaganda in the past, we continue to be challenged by it in the present.

Two key recommendations of the report stand out:

The underlying gap in values and goals between the United States and Russia is far too frequently underestimated by those in power in Washington. The last to fully understand it was President Ronald Reagan, who incidentally also had the best information strategy in recent history.