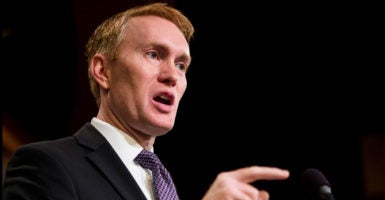 For two years, Sen. James Lankford, R-Okla., has persisted in fighting to scale back the Obama administration’s use of regulatory “guidance” on controversial issues such as transgender restroom use in schools. (Photo: Bill Clark/CQ Roll Call/Newscom)

Sen. James Lankford, a Republican from Oklahoma, is known for his conservative values. So when he decided to take on the Obama administration over its mandate to schools on transgender bathrooms, it came as no surprise to those familiar with the reserved, red-headed senator.

But instead of attacking the Obama administration on the policy itself, which allows transgender students to use restrooms and locker rooms that correspond with their gender identity instead of their biological sex, Lankford is taking a different approach.

The 48-year-old senator is challenging the process the executive branch used to implement the sweeping policy, arguing that it was wholly unlawful.

How the administration pushes through these regulations “makes a very contentious relationship between the American people and our government,” Lankford said.

On May 13, the departments of Education and Justice sent what’s called a “Dear Colleague” letter to schools across the nation with guidelines on how to ensure that “transgender students enjoy a supportive and nondiscriminatory school environment.”

Citing legal documents, the letter suggested schools could be at risk of losing their federal funding if they did not comply. The letter triggered an ongoing debate over whether the Obama administration has the authority to impose such requirements on schools.

Lankford was among lawmakers who protested the executive branch’s actions. As chairman of the Homeland Security and Governmental Affairs Subcommittee on Regulatory Affairs and Federal Management, he held a series of hearings on Capitol Hill.

The third hearing examined the Department of Education’s interpretation that a portion of federal law known as Title IX applies to gender identity, as outlined in the administration’s “Dear Colleague” letter to schools. That has been a major point of contention between liberals and conservatives.

Lankford focused his questions on what he called the administration’s failure to abide by the Administrative Procedure Act, a law that requires proposed rules to be made public in the Federal Register with information that includes:

But people in the field, in businesses and universities or nonprofits, they just see a letter that comes from an agency and they assume they have to follow it. And [government officials] are absolutely overreaching what is allowed by law.

Defending the “Dear Colleague” letter on transgender students during the hearing, Amy McIntosh, a deputy assistant secretary from the Department of Education, said the letter was legitimate because it was “not legally binding.”

The administration’s guidance, sent in the form of a letter, “is not binding, does not have the force of law, and it does not specify a single way that states and school districts can stay in compliance with the law,” McIntosh said.

“There are a lot of districts that disagree,” Lankford replied.

Title IX, passed in 1972 and applying to all educational institutions that receive federal money, prohibits discrimination based on sex.

It covers approximately “16,500 local school districts, 7,000 postsecondary institutions, as well as charter schools, for-profit schools, libraries, and museums,” according to the Department of Education.

Lankford argues that when Congress passed Title IX, it was clear the law applied to sex, not gender identity.

“They passed a bill dealing with sex,” he said. “This administration has reinterpreted that, and said what they meant in the 1970s was actually gender, not sex. So they’re changing the way that it’s interpreted.”

To expand or amend the law, Lankford argues, the administration must go through Congress or at least abide by the Administrative Procedure Act.

“Congress can pass something with both, but they did not on the Title IX requirements,” he said.

The term “sex” refers to whether a person was born male or female, while a person’s “gender identity” refers to an individual’s internal sense of gender, which may be different from biological sex.

A variety of lawsuits have challenged the Obama administration’s interpretation of Title IX. One was filed by the Foundation for Individual Rights in Education, which advocates free speech, due process, and religious liberty on college campuses.

Robert L. Shibley, executive director of the organization, said Lankford’s hearings are “an important part of Congress’ oversight powers and responsibilities.” But ultimately, he said, “this will be resolved through actual congressional action.”

“[The administration] is basically using these ‘Dear Colleague’ letters,” Shibley said, “to push through what are really changes in the law that should at least have to go through the notice and comment process under the Administrative Procedure Act, which ideally would go through Congress itself and be passed through law if there’s going to be a change in legal requirements.”

In explaining the decision to send guidance on transgender students to schools and universities that receive federal funding, McIntosh said of the Education Department:

The Office of Civil Rights was engaged in investigating and reaching agreements with states and districts because those complaints seemed to be accelerating as, in general, the world has been paying much more attention to gay and lesbian and transgender rights in the recent years.

We felt that it was important that we tell a broader audience … how we were interpreting Title IX.

Lankford acknowledged that congressional hearings will only get him so far, and said he plans to continue fighting the Obama administration’s actions through Congress, the administrative process, and the courts.

Lankford said he doesn’t object to extending greater protection against discrimination to students who desire it, but said those decisions should be left up to local school districts to work out.

“I don’t want any child to be bullied, I don’t want anyone having an unsafe situation at a school. But the local school districts should be those entities that actually handle that, not have someone from Washington, D.C., have a one-size-fits-all [solution] for every district, whether it’s Hawaii, Alaska, Oklahoma, or Maine, to say this is how you will handle this issue,” he said, adding:

Those districts can handle it, and they should have some sort of protections that are in place. It’s entirely reasonable for the federal government to step in and say to a district, ‘What are you doing to make sure that every student is protected and is in a safe learning environment?’ That’s a reasonable request by them. But to tell them exactly how to do it, that is an overreach. That is left up to the state to make that decision, not a federal responsibility.