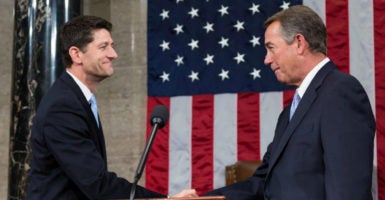 More than a year after Rep. Paul Ryan picked up the House speaker’s gavel, Rep. Devin Nunes has launched an effort to blunt the parliamentary measure used by the House Freedom Caucus to oust his predecessor.

The California Republican wants to end the privileged status of the “motion to vacate the chair.” And while the proposed parliamentary reform wouldn’t go into effect until the next Congress convenes in January, it’s led to conservative saber rattling inside the GOP conference already.

Freedom Caucus members say publicly that they plan to oppose the revision. In private, their staff warns that the rule update would spark an outright revolt in Republican ranks.

“I could not vote for rule changes that eliminate a Jeffersonian rule that has existed since our country’s founding,” Rep. Mark Meadows, R-N.C., said, “no matter how well intended the member’s motives happen to be.”

The motion to vacate is the most powerful parliamentary weapon in a House member’s arsenal. As a “privileged” measure, it allows any lawmaker to force a floor vote on whether to remove the speaker.

Meadows deployed the motion last July, launching a coup inside the GOP shortly before Congress adjourned for the summer. But rather than risk a vote on the floor, then-Speaker John Boehner announced later in September that he would retire.

That episode illustrates the dangerous and “destabilizing” effect of the parliamentary move, said Nunes, who serves as chairman of the House Intelligence Committee.

“My proposal is to make a simple rule change to prevent a small minority from destabilizing the House speakership,” Nunes told The Daily Signal in a written statement.

But his plan wouldn’t do away with the proposal entirely. Instead it would wrest power from individual lawmakers and instill it in conference. Under the proposed change, the majority of an either party conference—as opposed to an individual member—would have to agree to file the motion to vacate the chair.

“Under my proposal a speaker could still be challenged,” Nunes said, “but it would require significant support from at least one of the parties.”

Still, Freedom Caucus Chairman Jim Jordan, R-Ohio, defended the measure as “an essential tool given to us by the Founding Fathers” and said “any effort to get rid of the centuries-old ‘motion to vacate’ is a non-starter.”

“Any attempt to alter it would cross a line, and undermine both the trust of members in their leadership and of Americans in their representatives,” Jordan told The Daily Signal.

That mentality has earned the pugnacious Freedom Caucus enemies.

When the conservatives launched a coup against Boehner, Nunes, a prominent ally of the Ohio speaker, railed against the Freedom Caucus, labeling them “right-wing Marxists” and “an arm of [Minority Leader Nancy] Pelosi.”

But if successful now, Nunes could keep Ryan from ever enduring his predecessor’s fate. That would likely be welcome news in the speaker’s office.

The former vice presidential nominee made reforming the motion to vacate one of his requirements for taking the third-ranking post in the U.S government.

“He believes there needs to be a change to the process for a motion to vacate the chair,” wrote Ryan spokesman Brendan Buck last October. “No matter who is speaker, they cannot be successful with this weapon pointed at them all the time.”

Ultimately, Ryan backed down from that request. But it’s not clear whether he will support the current effort to change the rule.

Ryan’s spokeswoman AshLee Strong would only tell The Daily Signal, “The speaker is focused on protecting our majority and any rules discussions will take place after the election.”

“This would fulfill that requirement,” a senior GOP aide familiar with Nunes’ plan said. And another senior staffer from a moderate Republican office agreed, noting that “this was one of Ryan’s major asks, so I’d take him at his word.”

Conservative aides warn that the change wouldn’t be worth the cost.

“It’s all up to Ryan. If he agrees to the change, then he’d have a Freedom Caucus revolt on his hands,” a senior conservative aide said. “Even if he was publicly noncommittal, they’d still blame him.”

The conservative staffer said he wouldn’t be surprised if the speaker gave his blessing to the Nunes’ plan. “This was one of Ryan’s first key demands and he didn’t get it,” the aide said.

There’s little appetite among Freedom Caucus members to launch a motion to vacate the chair against Ryan, though. The speaker regularly receives praise for articulating Republican policy and keeping his door open to conservatives.

“I don’t think anyone says it is Ryan. Whoever is in that slot has tremendous pressure over their head,” Rep. Dave Brat, R-Va., said, describing the challenges facing Congress.

“But it’s clearly a move to protect the existing power structure. It goes in the opposite direction of what we need. We need total accountability across the board,” Brat added.