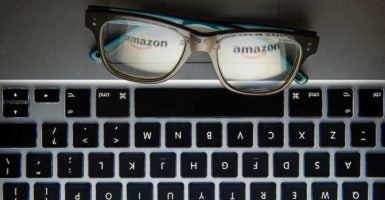 Conservatives are wary of internet sales tax legislation in the works that would create an “unlevel playing field” for online businesses.

Republican leadership in Congress may have promised Democrats to schedule a vote on legislation related to online sales tax, a memo from the Conservative Action Project, a group including organizations that represent major elements of the conservative movement, says.

“Insiders on K Street have reported a secret plan that Republican leadership will soon bring to the floor of either the U.S. House or the U.S. Senate a bill that would increase taxes consumers pay on purchases made over the internet,” the memo says.

Senate Majority Leader Mitch McConnell’s office told The Daily Signal there are no scheduling announcements or updates on this legislation.

McConnell was reported to have promised a vote on legislation known as the Marketplace Fairness Act.

The Hill reported supporters of the legislation “say the measure would correct an unfair advantage that online retailers have over brick-and-mortar shops.”

Sen. Michael Enzi, R-Wyo., a sponsor of the Marketplace Fairness Act of 2015, said in a statement that the legislation “would put Main Street businesses on a level playing field with online retailers.” He stated in March 2015:

The Marketplace Fairness Act is about supporting the jobs we have in our towns. It is about the people who are our neighbors who work in our local stores. Right now, thousands of local businesses are forced to do business at a competitive disadvantage because they have to collect sales and use taxes and remote sellers do not.

The law would give states more authority to tax online sales purchases and make online purchasers responsible for collecting and remitting taxes based upon where the purchaser lives.

A vote would now be expected to take place after the November election during what is known as a “lame-duck” session of Congress.

The legislation “would be a cronyist handout to big business,” the Conservative Action Project memo says.

“It would be a cronyist handout to big business.” —Conservative Action Project

This plan appears to be a deliberate attempt to hide something from the voters that leadership knows is unpopular. But leadership can’t bring itself to say no to their lobbyist friends on K Street, so they’ve reportedly promised them a vote after the elections, when the voters can no longer show their disapproval at the ballot box for raising their taxes and their costs of purchasing goods online.

The Conservative Action Project says legislation such as this would be a disadvantage to small businesses and would harm the privacy of consumers.

“Since the schemes would—by design—erect barriers to entry (and to staying afloat) for small businesses, big businesses like Amazon and others have already said they will cash-in by setting up their own tax-collection software platforms,” the CAP memo says.

Signatories on the memo are also wary of potential hacking that could occur on the consumer information that would be collected and shared with the government.

For instance, Amazon online purchases that are shipped to 28 states and the District of Columbia may be subjected to sales tax according to state tax laws. Amazon more recently opened its first brick-and-mortar bookstore in Seattle and has plans to open more locations.

According to the Tax Foundation, there are nearly 10,000 tax jurisdictions in the United States.

“It would be taxation without representation,” the memo says.