Cruzing Past the Point 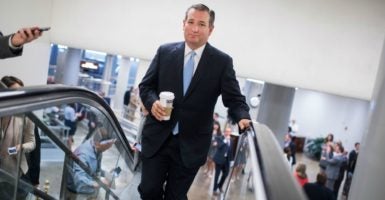 Heritage exists to promote conservative policy solutions to any lawmaker willing to consider them. That could be Ted Cruz, or Hillary Clinton, or Donald Trump, or Bernie Sanders. (Photo: Tom Williams/CQ Roll Call/Newscom)

Earlier this week, The Wall Street Journal ran an interesting editorial critiquing the endorsement decisions of Sen. Ted Cruz, R-Texas, with regard to the coming presidential election.

Several months ago, I took issue with The Wall Street Journal’s editorial page for holding Donald Trump and Ted Cruz to different standards: understanding the anti-establishment appeal of the former while condemning the latter for campaigning on the exact same trends in American political life.

This assessment included a mischaracterization of The Heritage Foundation’s work, which is nonpartisan research and development and promotion of conservative policies. Strangely enough, this week their editorial page included another misunderstanding, alleging that Cruz would find “Heritage Foundation echo chambers” a platform for his future political endeavors.

With apologies to Cruz, House Speaker Paul Ryan, House Minority Leader Nancy Pelosi, Senate Majority Leader Mitch McConnell, Senate Minority Leader Harry Reid, and others: There are no echo chambers here. If there were, my office might be less crowded with equally brilliant experts from around the country arguing for aggressive foreign policy or noninterventionism, immigration security or immigration assimilation, libertarians and traditional conservatives.

Fortunately, we converse with all of the above. Our only guidelines are the Constitution and the good reason and mores of the American people.

This may come as a surprise to political partisans—but not members of The Heritage Foundation, or anyone who has been paying attention this election cycle: Heritage exists to promote conservative policy solutions to any lawmaker willing to consider them. That could be Ted Cruz, or Hillary Clinton, or Donald Trump, or Bernie Sanders.

We welcome these conversations. Believe it or not, millions of conservatives across the nation do as well. Not because they support Heritage (although many do) and not because they might support Trump or Cruz. But because there is a vibrant debate within conservatism on how best to secure posterity for the next generation which cannot currently be conducted at Yale, at The Huffington Post, or even in the pages of The New York Times.

I know the editors at The Wall Street Journal—which is often home to prudent, conservative policy ideas—endeavor to be similarly nonpartisan, and I hope we can look beyond party politics and toward commonsense solutions that improve the lives of all Americans.

As Obamacare crumbles, our national debt reaches $20 trillion, and enemies of freedom become more active, we need more leaders willing to shake up Washington rather than settle for bad compromises that are sold as modest gains, which will only breed more cynicism among Americans.