No Budget? This Senator Says That Should Mean Pay Cuts for Politicians, Staff 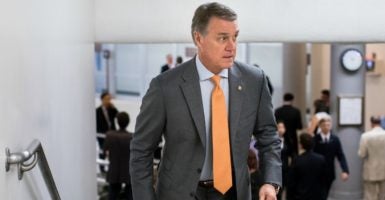 More specifically, the freshman senator from Georgia wants members of both the Senate and the House and their staff to suffer “severe consequences” if Congress fails to pass a budget. He proposes mandatory pay cuts and canceled recesses as a way to keep the lawmakers on track.

A successful businessman, Perdue admitted that a smaller paycheck probably wouldn’t hurt him or many of his wealthy Senate colleagues. But he told reporters Thursday that lawmakers “don’t want to see their staff blown up.”

That’s a harsh but necessary consequence for Congress as the nation faces a looming debt crisis, Perdue said as he released the broad strokes of his plan to overhaul the budget process.

A member of the Senate Budget Committee, Perdue says his proposal is more of a prerequisite than prescription for dealing with the nation’s $19 trillion in debt.

Perdue would scrap the 1974 Budget Act—which he says has worked correctly only four times in over 42 years—by breaking down the wall between authorizing and appropriations committees.

That would mean merging appropriations subcommittees, which allocate funds, with committees that work on the policy.

Other proposed big changes include transforming the budget into a piece of legislation that must be signed into law. Currently the budget serves as a sort of spending blueprint that Congress agrees to but never sends to the president for his signature. As a result, the budget isn’t binding.

And Perdue’s plan would require Congress to add nondiscretionary spending—such as Social Security and Medicare—to the budget.

To deal with the increased workload, the plan would give lawmakers more time by moving the start of the fiscal year from Oct. 1 to Jan. 1.

The Daily Signal obtained a fact sheet of the proposed plan, though the text of the coming bill hasn’t been finalized.

Perdue’s office said the senator has been working on the plan for months with the blessing of Senate Budget Chairman Michael Enzi, R-Wyo., and the cooperation of House Budget Chairman Tom Price, R-Ga.

But the initial details were met with skepticism from some budget experts on personnel and policy grounds.

“I think Sen. Purdue is exactly right to call for reform and shift focus to the major spending categories on autopilot,” said Paul Winfree, director of the Thomas Roe Institute for Economic Policy Studies at The Heritage Foundation.

“However, I worry that moving the budget year to coincide with the calendar year will only reduce transparency by shifting the annual appropriations debates to between Thanksgiving and Christmas for a procrastinating Congress,” Winfree said.

“It’s a terrible, terrible, terrible idea to think that you can somehow produce legislation by docking the pay of staff,” Jim Dyer, formerly the top Republican aide on the House Appropriations Committee, told the Atlanta-Journal Constitution. “What you will do is send the staff off looking for other jobs.”

Shortly after the Senate passed a stopgap spending measure known as a continuing resolution Wednesday afternoon, Perdue previewed the plan from the floor, followed by eight senators including Enzi and Foreign Relations Chairman Bob Corker, R-Tenn.

“We really don’t have a budget process. I mean, to even call what we do a budget, per most human beings’ understanding of what a budget is, is obviously not realistic,” Corker said. “We have to, in essence, get a process in place that actually works. It’s impossible for the process we have today to work. Today is a perfect example of that, right?”

In the Senate, Perdue has tried to leverage his business acumen during the legislative process, regularly mentioning his commercial background.

A former Fortune 500 executive at Reebok and Dollar General, Perdue said that when developing the plan he looked to the examples of businesses, states, and foreign countries.

In a floor speech, Enzi said of Perdue:

I remember introducing him the first time we had a Budget Committee meeting, and I said, ‘Sen. Perdue knows how to balance a budget, he’s been working in the private sector.’  And he said, ‘No, in the private sector you have to show a little bit of a profit.’ Well, we’re going to have to show a little bit of profit around here if we’re ever going to get rid of the debt.