‘Voiceless’ Speaks for the Compassion Driving the Pro-Life Movement 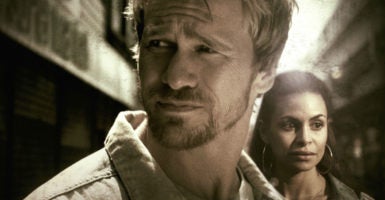 The creator of the independent film “Voiceless” hopes to shift the national conversation about unplanned pregnancies by showing the impact one church can make through local outreach and pro-life advocacy.

“My struggle has always been with the church, as it has been having confrontation with the world,” says Pat Necerato, a street preacher turned filmmaker who wrote and directed “Voiceless.”

“I wanted to create a film to challenge the church to get involved in the public square,” Necerato says.

With a budget of nearly $1 million and slated for release Oct. 7 in hundreds of theaters, “Voiceless” aims higher than most faith-based films in terms of production quality.

But it’s the story and true-to-life script, born from Necerato’s own experiences, that make it uniquely suited to help move the pro-life cause out of cultural stalemate.

“Voiceless” will premiere Oct. 2 in Washington, D.C., at a most unlikely venue:  a large screen outside the U.S. Supreme Court.

Five Years in the Making

“You always write from personal experience,” Necerato, 46, says. “I was pretty much all of the characters in this movie at one point or another.”

“Voiceless” centers on Jesse Dean, an Army veteran who moves to Philadelphia with his wife to work at a local church. While his hands-on outreach gives him inroads into the community—teaching free boxing classes, for starters—it begins a series of increasingly tense conversations within the church. “I cannot tell you how many times I’ve heard Christians, even pastors, say: ‘We need to be saving souls, not so much worried about confronting evil,'” recalls Necerato, echoing a key scene in the movie:

Those words never really jibed well with my theology that Christ is king, he can redeem any aspect of our world, and he has called Christians to be saved and be a part of it. That’s the big picture.

One of my favorite lines in the movie is when Jesse says, ‘We are saved for the world, not from the world.’ It encapsulates the theme of ‘Voiceless’ and it speaks to my personal background—urging the church to confront the evils of society.

“I was a street preacher, and I still am,” Necerato, who lives in Trenton, New Jersey, says. “Rather than some stereotype of a crazy guy screaming on the corner, being a public witness can be done in a God-honoring way. Where evil is being lifted up unchallenged, I believe we can go out and proclaim the Gospel there just as strong.”

While popular culture tends to present abortion as merely political, “Voiceless” reframes the issue in moral, cultural, and personal terms.

“What is right? What should we be doing—a mercy ministry? Should we be prioritizing individuals? Should we be confrontational?” Necerato asks. “I wanted to create a movie that could address some of those questions with a real-life guy in real-life situations.”

Jocelyn Cruz, the co-lead in “Voiceless,” has a personal connection to the film’s focus on lives in the womb.

Cruz, whose previous roles in the hit movies “Marriage Retreat” and “This Is Our Time” helped her land the part, points to how the abortion center in the film has a sign out front that states “empowering and protecting.”

“Empowering and protecting women, children, and families at large is one of my passions,” Cruz says. “I am a trained postpartum doula, so I work with families right after birth. I get to see and experience firsthand how important it is to have a community of people around you while raising a child.”

In a way that complements the director’s perspective, Cruz says other questions are also at the heart of “Voiceless.”

“How can we best empower [pregnant] women by helping them? How can we be there for them when they have the babies? How can we work with and support the family?” asks Cruz, whose character in the film plays a pivotal role rescuing women who are vulnerable to abortion.

“A mother can only give as much as she has, so I feel it’s of extreme importance to help them fill up their storehouse so they can best take care of their new child,” Cruz says.

With the script complete and budget secured, Necerato and his team sought out a location to shoot “Voiceless” while simultaneously beginning the casting process.

“I wanted it to have a gritty and gray working-class look to it. Choosing Philadelphia fit with that: the architecture, the L-train—the whole ‘Rocky’ feel of the city,” Necerato says, adding:

Metaphors are used throughout the story, with Jesse being a war veteran who was fighting for our country; then coming home, and now fighting to protect life and stop violence. He is a boxer who ends up teaching boxing. Shooting ‘Voiceless’  in Philly was really about the aesthetics of the film reflecting underlying themes. For Cruz, filming on location in the City of Brotherly Love was an adventure.

“This was the first time I’ve shot a movie outside of California, so it was really fun getting to travel to Philadelphia and experience a different part of the country,” Cruz says.

“I believe we were able to capture some of the best talent coming out of Philadelphia: Brian Wilson, who starred in ‘Creed,’ Christopher Mann from ‘House of Cards,’ Susan Moses, and many others,” Necerato says. “Our casting director Melanie Forchetti and I rolled up our sleeves and saw over 200 auditions to arrive at this exciting ensemble cast.”

With a national release on the horizon, the true accolades for cast and crew will be audiences connecting with the story.

Necerato says he hopes his film will spark conversations.

“There are all kinds of reasons—political, spiritual, and emotional—that people avoid talking about abortion,” he says.

“Voiceless” addresses issues surrounding unexpected pregnancies in a holistic manner. Scenes of counseling and prayer outside an abortion center are paired with a heart-wrenching subplot: An African-American family is strapped for resources and unsure how to make room for another baby.

“I know some women personally who have had abortions,” Cruz says. “I can see there is still a lot of pain. Women feel trapped in a way and are scared to raise a child on their own. This is something most people don’t talk about, but it is very real.” Stuart Migdon, executive producer for “Voiceless,” recalls how he and his girlfriend were pressured as teens by family members to have an abortion when they faced an unexpected pregnancy.

“Though we had no idea of how we were going to make it, we never thought about an abortion,” Migdon says in a recent interview. “We didn’t hesitate—we got married. We struggled for a while but pressed on. God knew what he was doing.”

Necerato brings up another personal aspect of the issue.

“We see abortion as a women’s issue, knowing how much women suffer physically and emotionally from it,” the director says. “But men also suffer from having these incidents in their past. We often try to sweep it under the carpet, doing anything we can to ease our conscience.”

Referring to how taxpayer dollars flow every year to abortion providers such as Planned Parenthood, Cruz has her own idea of how funding should be prioritized.

“Family counseling and postpartum support are services that can absolutely be afforded with the amount of money some groups like Planned Parenthood alone receive in government subsidies,” she says.

From Belief to Strategies That Save Lives

Asked about the diverse spheres of the pro-life movement, Necerato says, “In the battle to save lives, there is no one absolute approach. But the common denominator is always compassion and a heart of love.”

He sees prayer at abortion centers as a vital front for pro-life advocacy:

We are fighting an extremely weighty spiritual battle. When I’m at an abortion clinic, there is a different spiritual heaviness. Unless you’re prayed up, people out there on the front lines are not going to be spiritually equipped to endure this.

We are called very clearly from scripture to pray unceasingly. We could win decisively in the legal arena or other battles, but without prayer it’s not going to have the force and power.

Perhaps it’s no coincidence that “Voiceless” premieres just as 40 Days for Life ramps up its largest-ever national prayer campaign, while the pro-life organization Bound4LIFE marks 12 years praying at the Supreme Court.

Cruz and Necerato both emphasize how true convictions must be lived out with actions.

“We have to pray and go, pray and move, pray and act,” the director says.