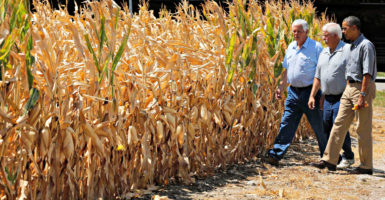 Rep. Warren Davidson, a Republican, represents Ohio's 8th Congressional District. An Army veteran, he holds an MBA from the University of Notre Dame.

We all knew President Barack Obama’s lame-duck presidency would be bad, but for the millions of Americans who work at family farms and businesses, it’s about to get a lot worse.

As Heritage Foundation tax expert Curtis Dubay wrote at The Daily Signal, Obama is trying to sneak in a tax hike in his twilight days. His Treasury Department unveiled midnight regulations that effectively would increase the death tax to 30 or 40 percent.

If Obama channeled his desire and creativity in raising taxes into cutting spending, we probably would have a budget surplus by now.

In this case, the president’s creativity involves tinkering with well-established “valuation discounts” that families use to calculate their death tax liability.

These valuation discounts are one reason family businesses have been able to accurately calculate the burden of the estate tax—popularly known as the death tax—so the business or farm itself can be passed from generation to generation.

If these valuation discounts didn’t exist, then every time an owner died, a business essentially would have to overvalue itself, and thus be subject to a higher effective tax bill than the law intends. Farms especially are affected by this issue, and the estate tax generally, because it is a lot harder to sell off 40 percent of your farm than 40 percent of stocks or other assets.

If that’s not too much of a burden, imagine being a partial owner of one of these farms.

If you own one-tenth of your grandfather’s farm, you don’t have enough say in the future of the business to decide whether you want to sell off the farm or pay the 40 percent tax to keep it.

Such partial owners are faced with a choice: Either sell off your share for much less than it is worth or pay the government 40 percent of its value. For family-owned businesses, built with the blood, sweat, and tears of ancestors, this is an immoral choice for the government to force on people.

This issue affects workers, too. In cutting costs and selling assets to pay the IRS, many family businesses facing a tragic death and an ensuing death tax are forced to downsize.

For the economy as a whole, this means that millions of people who work for small businesses could lose their jobs, just because the Internal Revenue Service wants an added piece of the action if a business owner dies.

What’s good for the economy is when businesses grow and innovate. They shouldn’t have to plan to liquidate their assets to pay the IRS bill whenever an owner dies.

Democrats are floating a plan for a 65 percent death tax in order to “level the playing field.” This is no more than socialist planning by elites to confiscate property from hardworking Americans to pay for failed government programs and spending that won’t improve standards of living.

For the mega-rich who have enough money to structure their assets, this works just fine. For hardworking Americans who put everything they own into creating jobs and building their business, this is not an option.

Regardless of the bad economics behind the death tax, the Obama administration is going about it in the wrong way.

Deciding tax policy is a power enumerated solely for Congress. This is something that should be decided in the open with a robust public debate. The Founding Fathers believed this too, which is why they gave Congress, and the House in particular (the “people’s House”), the power to initiate tax laws.

If Congress doesn’t do anything, this will mean an even greater increase of out-of-control executive authority.

That is why I introduced legislation, the Protect Family Farms and Businesses Act, to halt the Obama administration’s backdoor tax increase. It would prohibit the administration’s new rule, or any like it, from going into effect.

The bill already has more than 20 co-sponsors and the support of more than 100 organizations.

Too much is on the line for too many for Congress to stand idle. The jobs of millions of Americans are at stake.