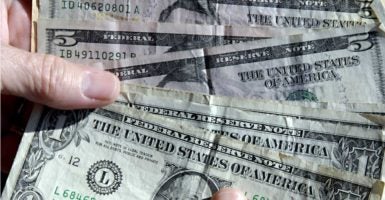 Taxpayers expect their government to spend tax dollars wisely, on activities that benefit the public. But across the country, governments at all levels give away tax dollars to the exclusive benefit of public unions without getting anything in return.

This subsidy, known as union release time, has flown under the radar for decades, but now state free-market groups are starting to do something about it.

The practice of union release time allows government employees to conduct union business on the taxpayer’s dime. You heard that right. All over the country, taxpayers foot the bill for union agents to negotiate contracts, participate in grievance procedures, attend union conventions, and other activity entirely unrelated to any public purpose.

In essence, union release time treats taxpayers the same as nonunion members who are compelled to pay agency fees, which are forced union dues payments.

In other words, the gift clause prohibits states and municipalities from giving away the public’s money unless it primarily serves a public purpose or the government receives adequate consideration. Since union release time serves the private interests of unions and fails to provide any value to the public, the gift clause can be used to eliminate the subsidy.

In some states, public policy organizations are attempting to do just that. Most recently, on Sept. 7 the Goldwater Institute and Texas Public Policy Foundation filed a lawsuit against the city of Austin and the Austin Firefighters Association Local 975. They are challenging that the collective bargaining agreement between the city and union, which grants release time, violates Texas’ gift clause.

The release time that the International Association of Firefighters receives is not a trivial amount. According to public record requests submitted by the Competitive Enterprise Institute, in Austin, the city’s police department, fire department, and emergency medical services were granted 10,857 hours of release time in fiscal year 2012 and 16,963 in fiscal year 2013, a cumulative total of 27,821.14.

For the salaries made available, the cost of union release time to Austin taxpayers was $227,530 and $593,783 in fiscal year 2012 and fiscal year 2013, respectively. These costs do not include pension benefits.

“I’ve been fighting to be put back to work at our fire department.” —Firefighters Association Local 975 President Bob Nicks.

On top of the considerable costs of release time, the activity performed on the public’s dime can be absurd. While the bulk of release time activity conducted by the firefighters union is spent attending union conventions, union conference meetings, grievances and bargaining, other events include a “retirement BBQ” and “fishing tournament.”

Those who support fiscal responsibility are not the only ones who think union release time is a waste of money. “I’ve been fighting to be put back to work at our fire department,” Austin Firefighters Association Local 975 President Bob Nicks told FoxNews.com. “The chief wouldn’t allow it. How much they have fought against me was crazy.”

White determined that “A policy of the Fort Worth Independent School District, which permits teachers to work for professional organizations while being paid salaries by the school district, constitutes an unconditional grant of public funds to a private organization and therefore unconstitutional.”

Other lawsuits are pending around the country.

In Idaho, the Idaho Freedom Foundation is challenging release time at the Boise Independent School District, which pays $35,932 of the Boise Education Association’s president’s salary and benefits, despite the fact he exclusively performs union activity.

Since 2009, the current Allentown Education Association president, Debra Tretter, has exclusively conducted union business and not taught even one class. While on the yearslong hiatus from teaching, the Allentown Education Association president continues to receive her salary, insurance, benefits, and is allowed to keep her seniority. The lawsuit, filed on Feb. 24 in the Commonwealth Court of Pennsylvania, is still in preliminary stages.

Meanwhile, in Arizona, the Goldwater Institute had initial success in court to halt the practice of release time. In 2015, the Arizona Court of Appeals held that release time is an unconstitutional public expenditure.

The city of Phoenix had been granting the Phoenix Law Enforcement Association release time to the tune of nearly $1 million annually. But the Arizona Supreme Court this month reversed that decision, saying that police officers performing union business instead of protecting the public somehow constitutes a public purpose and that paying public servants not to work for the taxpayer provided Phoenix with adequate consideration from the union.

That can’t be right. At a time when so many people are struggling to make ends meet and government services are stretched thin, elected representatives owe it to citizens to take a hard look at what’s being funded and cut activities that do not advance a public purpose.

Under union release time, the government pays unions to lobby for higher member compensation, and thereby take as many resources from the taxpayers as possible. This is clearly unjust and unfair to all the people who work hard and pay taxes.