5 Statements From Top Military Brass That Should Concern You 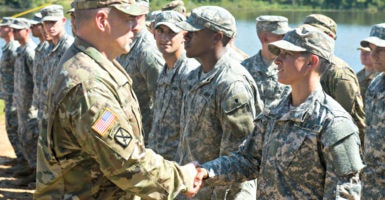 Andrew Santora is a member of the Young Leaders Program at The Heritage Foundation.

Four of America’s top military officers recently testified before the Senate Armed Services Committee on long-term budget challenges facing the military. While the hearing didn’t grab many headlines, some of the statements from these leaders should make all Americans concerned about the status of our military.

Ultimately, these four officers (the chiefs of staff of the Army and Air Force, the chief of naval operations, and the commandant of the Marine Corps) stressed the dire and potentially deadly effects of inadequate funding on military readiness.

Here are five statements during the Sept. 15 hearing from Army Chief of Staff Gen. Mark Milley and two of the three other chiefs that should be particularly concerning:

Milley explained that the current underfunding of the Army, along with an eight-year reliance on stopgap funding bills, particularly jeopardized the Army’s ability to be ready for future threats.

All four chiefs noted that the military has felt the strain of funding cuts, which led to a less capable, less experienced military. Milley stressed that the Army isn’t investing for the future, raising the potential that our adversaries will be better equipped.

Just as President Ronald Reagan talked about “peace through strength,” Milley argued that combat readiness is required to ensure that the U.S. doesn’t have to fight a war in the first place.

Although the chiefs recognize that a strong military isn’t cheap, they maintain that being unready would prove more costly in the end. They say Congress should fund readiness now to avoid a more expensive war later.

3. Gen. David Goldfein, Air Force chief of staff: “Pilots who don’t fly, maintainers who don’t maintain, controllers who don’t control, will walk … if we don’t give them the resources. … Where we have low readiness, we have our lowest morale.”

Goldfein argues that if airmen aren’t given adequate, modern equipment and sufficient opportunity to train with it, then they are more likely to leave the military.

The best men and women in uniform stay because they want to do the mission. When they aren’t allowed to do their jobs, they’ll go elsewhere.

4. Milley: “Sequestration will take the rug out from underneath us.”

While each of the military chiefs expressed frustration regarding the current defense budget, they painted an even darker picture for the military if Congress doesn’t change course.

If lower budget caps return, what Milley called sequestration, the military would lack essential funding to carry out its mission.

5. Gen. Robert Neller, Marine Corps commandant: “We’re making it now on the backs of those sergeants and staff sergeants out there that have to do work twice.”

Neller noted the ultimate burden of inadequate funding falls on the men and women in uniform. When the military lacks adequate resources, the troops themselves ultimately have to figure out ways to cope with the shortfalls.

This situation puts unnecessary strain on enlisted leaders, the backbone of our military, who are forced to cope with the gaps so that they can carry out their missions.

And finally, if those five statements weren’t sufficient to cause grave concern, a question from Sen. Lindsey Graham, R-S.C., brought out the surprising news that President Barack Obama has not been talking with his most senior military officers about these issues.

“Have you had a conversation with the commander in chief telling him what you just told us?” Graham asked, putting the four chiefs on the spot.

The current state of the military after budget cuts should be of the utmost concern to the president, of course. Each chief answered Graham’s question with a “no.”

If politicians in Congress and the White House do not listen to the concerns of military leaders, they run the risk of threatening military readiness.

Overall, the chiefs agreed that the defense budget must be increased to enable the military to work toward adequate levels of combat readiness. The problems they outlined parallel those identified in The Heritage Foundation’s 2016 Index of U.S. Military Strength.

Congress and the president should work together to begin rebuilding the military, because a strong national defense is not a partisan issue.