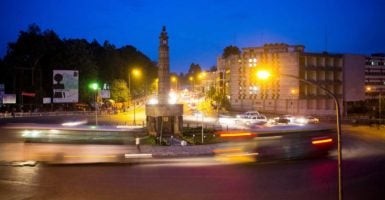 Addis Ababa is the capital of Ethiopia—one of the oldest countries in the world—which has been wracked with civil strife. (Photo: picture alliance/Yannick Tylle/Newscom)

The Heritage Foundation has taken its message of economic freedom to Africa. Today’s stop is Addis Ababa, the capital of Ethiopia—source of the Blue Nile river and one of the oldest countries in the world that traces its history back to Biblical times 1,000 years before Christ. Remember the Queen of Sheba, in the time of King Solomon? She was from Axum, in Ethiopia.

Ethiopia is also the second most populous country in Africa, with 95 million people.

The Heritage Foundation’s 2016 Index of Economic Freedom reports that economic expansion has averaged about 10 percent over the past five years, facilitated by improved infrastructure and more effective mining and farming techniques. Unfortunately, that economic growth has not been enjoyed evenly by all of the roughly 80 ethnic groups in the country.

As the BBC reports, Ethiopia has had civil unrest for the last year “in the Oromia region which has been unprecedented in its longevity and geographical spread.” The Oromo people account for one-third of Ethiopia’s population. As the BBC notes, however, the issues go far deeper than ethnicity: “frustrations over land ownership, corruption, political, and economic marginalization.”

That is consistent with the findings in the Heritage index, which reports that the ruling Ethiopian People’s Revolutionary Democratic Front and its allies in the Tigray ethnic group claimed all 547 seats in the May 2015 parliamentary elections. Today, little remains of democracy in Ethiopia after the passage of laws that repress political opposition, tighten control of civil society, and suppress independent media.

The mastermind behind the rise of the Ethiopian People’s Revolutionary Democratic Front was the late Prime Minister Meles Zenawi, a staunch ally of the United States in the war on terror but also an authoritarian African strongman who rose to power in the early 1990s and ruled until his early death in 2012 at the age of 57.

As The Huffington Post reported, Meles was a highly skilled political tactician who could weave together coalitions among the many Ethiopian factions. His successors have not been so skilled, or so creative, and have asserted the one-party rule of Ethiopia’s ascendant political party more brutishly in the years since Meles’ death. They also have suffered from the global decline of commodity prices.

In his early years in power, Meles advanced economic growth by dismantling the Soviet-style, five-year plans that had been put in place by the brutal military Derg government that had ruled since the mid-1970s, when it overthrew Emperor Haile Selassie.

Later, Meles was hailed for the strong economic growth his statist, “neoliberal” economic policies generated during the boom years for commodity prices.

As the index reports, economic growth beginning in the Meles years reduced the percentage of the population living in poverty by 33 percent, but per capita income remains among the world’s lowest, and many young people leave to seek opportunity elsewhere. The economy is based largely on agriculture—85 percent of workers are on millions of small and inefficient farms that are vulnerable to droughts.

Unfortunately, as faithful readers of the index know all too well, such neoliberal industrial policies—whereby the government picks winners and losers and subsidizes favored sectors—do not form a sustainable model for the long term. And, increasingly, the long term is now here for the current Ethiopian People’s Revolutionary Democratic Front leadership—who are increasingly dividing the economic pie mostly among their own Tigray brethren.

To turn things around, Ethiopia must return to the more inclusive governance structures that Meles pioneered and share political power. But it must also abandon the Meles neoliberal model, and address the deficiencies noted by the Index of Economic Freedom, especially with regard to stronger rule of law, more transparency in the investment regime, and more competition in the banking sector.

Ethiopia remains a fascinating country, as it was in biblical times, with numerous attractions for tourism that could be developed with better infrastructure and greater political stability. Ethiopians deserve a better government than the one they currently have.