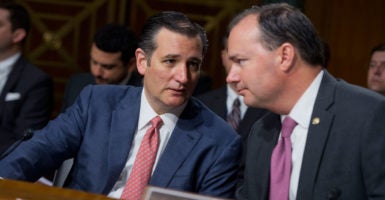 Sens. Ted Cruz of Texas and Mike Lee of Utah are pressing their case that the Department of Justice favors abortion clinics over churches, demanding that the law enforcement agency take steps to ensure “the rights of all American citizens”—not just some—are protected.

In a letter sent Tuesday, obtained first by The Daily Signal, Cruz and Lee criticize the Justice Department’s enforcement of a 1994 law. The intent of the law was to prohibit the use or threat of force and physical obstruction outside abortion clinics, guaranteeing safe access to such facilities.

Before passing the legislation, called the Freedom of Access to Clinic Entrances (FACE) Act, lawmakers extended the protections to apply to places of worship.

In their letter, addressed to Attorney General Loretta Lynch, Cruz and Lee accuse the Justice Department of a double standard in enforcing the law. They argue that while the agency has pursued more than two dozen cases involving actions to safeguard access to abortion clinics, the agency hasn’t pursued a single case involving churches and other places of worship.

This is the second letter Cruz and Lee have sent to the Justice Department concerning the FACE Act. They sent the first March 16.

The Justice Department responded to Cruz and Lee in June, arguing the reason it has not used the FACE Act to protect religious liberty is because other statutes that are “broader in scope” already enable them to do so.

The FACE Act allows people to protest peacefully, and exercise their First Amendment rights outside abortion clinics and places of worship. However, if those demonstrations turn violent, they could face civil or criminal charges.

Since January 2009, the Justice Department has listed 25 cases it pursued under the FACE Act that involved access to women’s health clinics, some of which performed abortions.

In the response to Cruz and Lee, Assistant Attorney General Peter Kadzik wrote:

With respect to the protection of religious freedom, the department has prosecuted dozens of cases of violence directed at houses of worship and interference with the free exercise of religion under 18 U.S.C. 247, a statute that is broader in scope than the FACE Act.

According to the Justice Department, that statute “prohibits anyone from intentionally defacing, damaging or destroying any religious real property because of the race, color, or ethnic characteristics of any individual associated with the property.”

As a result, the Justice Department “has not filed any criminal or civil actions under the FACE Act in this enforcement area,” Kadzik said, citing several cases involving religious freedom that the agency pursued.

In one case, Jedediah Stout “pleaded guilty to the arson of a mosque and two attempted arsons of a Planned Parenthood clinic in Joplin, Missouri,” Kadzik wrote.

Another was the well-publicized mass murder June 17, 2015, at Emanuel African Methodist Episcopal Church in Charleston, South Carolina. Dylann Roof, now 22, was charged with “killing and attempting to kill African-American parishioners … because of their race and in order to interfere with their exercise of their religion.”

But Cruz and Lee weren’t satisfied with the Justice Department’s argument. They responded with the detailed letter to Lynch, dated Tuesday, arguing that the FACE Act “clearly offers broader protections than 247, which greatly undermines the DOJ’s rationale for not using FACE.”

“But even this somewhat misses the point,” the Republican senators add. “FACE is the law. It is not the DOJ’s prerogative to decide which laws merit enforcement and which ones merit no enforcement at all.”

By way of example, Cruz and Lee accuse the Justice Department of taking a pass on an instance in Los Angeles involving a massive protest against Mormons for the church’s support of the ballot question known as Proposition 8. Voters eventually approved the measure, which overturned a California Supreme Court decision legalizing same-sex marriage by upholding the definition of marriage as the union of one man and one woman.

A news clip, Cruz and Lee write, “shows ‘more than a thousand’ angry protesters chanting hateful slogans and blocking the entrance of the Los Angeles Temple of the Church of Jesus Christ of Latter-day Saints.”

“Demonstrations like this,” they add, “were part of a larger campaign of intimidation and harassment carried out against the Mormon Church for its support of California’s Proposition 8.”

This campaign of hate was covered extensively by the press; for example, stories ran in major newspapers like the Los Angeles Times, and on national news networks like CNN and CBS. The DOJ’s explanation for its inaction on this issue, that the matter ‘had not previously been brought to our attention,’ simply lacks credibility.

In short, it would appear the DOJ’s process for tracking violations of religious liberty is either woefully inadequate or purposefully biased.

In their letter, the senators ask Lynch to answer a series of follow-up questions and “respond to several inquiries made in our March letter that have gone unanswered.”

“The information we ask for is necessary to carry out our duty to conduct oversight of the DOJ, and to determine whether the DOJ is doing everything it can to protect the rights of all American citizens,” they write.