It’s Now or Never to Save the Internet 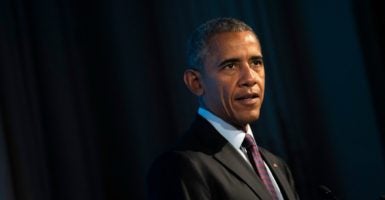 Congress must think long and hard about allowing President Barack Obama to give away the internet—because right now, that’s what he’s on track to do. (Photo: Drew Angerer/POOL/EPA /Newscom)

We have, unfortunately, come to expect our elected representatives to shirk hard decisions. So it came as little surprise when the Senate released the text of a continuing resolution late last week to fund the U.S. government that did not include key objectives sought by conservatives, such as stopping taxpayer funding for Planned Parenthood.

Although there are many problems with this budget deal, only one is irreversible and permanent: allowing the Obama administration to cede oversight of the internet to foreign bodies. It’s troubling that the Senate has failed to include language prohibiting this transfer of power.

The Internet Corporation for Assigned Names and Numbers (ICANN) is the nonprofit organization responsible for maintaining databases for internet domain names, essentially the phone book for the internet.

The Obama administration announced the goal of ending the U.S. contractual oversight of ICANN in 2014, and asked ICANN to submit a plan to fill the gap of U.S. withdrawal and to implement stronger accountability measures to make sure ICANN does not abuse its authority.

After two years of negotiations and effort, the Obama administration says that it is satisfied with the proposal even though it is incomplete.

Many of the reforms deemed necessary by the ICANN community to make ICANN accountable absent U.S. oversight will not be complete before next summer. Likewise, important legal questions that could threaten ICANN, the transition, or the stability of the internet remain unanswered. Finally, the new governance model is untested—we actually do not know if it will have the capability of governing ICANN and preventing it from abusing its authority.

Although there are many problems with this budget deal, only one is irreversible and permanent: allowing the Obama administration to cede oversight of the internet to foreign bodies.

Analysts at The Heritage Foundation warn that governments will gain new influence over the internet, that its freedom will suffer, and that ICANN leadership (both CEO Göran Marby and staff) will continue its troubling pattern of ignoring bylaws without the community holding leadership accountable.

This is important. Our economy and security are increasingly dependent on the internet. We should not be taking a blind leap into the unknown. But that is exactly what the Obama administration is proposing.

Lead Obama administration official Lawrence Strickling, administrator of National Telecommunications and Information Administration, has repeatedly said there’s not a hard deadline and that it’s better to get this right than get it done by a specific date.

But if the administration really believed that, why would it sign off on this incomplete proposal when it could extend the contract for a year and allow all of the reforms to be adopted and actually test the new ICANN governance systems to make sure that they work like they are supposed to work?

It is quite simply reckless, but it will happen unless Congress intervenes. Absent specific instruction otherwise from Congress, the contractual relationship between the U.S. government and ICANN will cease this Saturday—Oct. 1, 2016.

Once the U.S. lets the contract with ICANN end, there is no going back. The future of the internet is too important to risk on a half-baked proposal.

A free and secure internet is not just the concern of Americans, but of people across the world, especially those living under despotic regimes. Congress must think long and hard about allowing President Barack Obama to give away the internet—because right now, that’s what he’s on track to do. Congress has the power to stop this. Will it?