Hundreds of Noncitizens on Voting Rolls in Swing State of Virginia 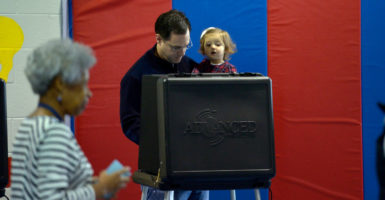 Voters cast ballots during the 2014 midterm elections at a polling place in Arlington, Virginia. "Every ineligible voter on the rolls could end up being an eligible vote that cancels out the vote of eligible voters," the leader of a watchdog group says. (Photo: Yin Bogu/Xinhua/Newscom)

The 2012 presidential race in Virginia was decided by just 3 percentage points, as was the next year’s race for governor. In both 2005 and 2013, fewer than 1,000 votes decided contests for Virginia attorney general.

Against this backdrop, watchdog groups have pushed local election officials in seven Virginia jurisdictions to reveal hundreds of noncitizens who are registered to vote. So far, they have found more than 550.

Potentially more could be found on the voters rolls, as the Public Interest Legal Foundation pursues a total of 20 counties and cities in the Old Dominion—a sampling of its 95 counties and 38 independent cities.

However, leaders of the group say the Virginia State Board of Elections has resisted release of information on ineligible voters.

The Public Interest Legal Foundation represents the Virginia Voters Alliance in a lawsuit filed earlier this year against the city of Alexandria. The city prompted its suspicion after the alliance  determined that more people were registered to vote in the city than eligible voters who lived there, said Noel Johnson, litigation counsel for the legal foundation.

“These records that we are trying to get should all be available through the National Voter Registration Act,” Johnson told The Daily Signal in a phone interview. “Every ineligible voter on the rolls could end up being an eligible vote that cancels out the vote of other, eligible voters. So these are high stakes.”

In most cases, Johnson said, counties respond by saying the Virginia State Board of Elections informed them not to provide information about noncitizens who are registered to vote.

Alexandria General Registrar Anna Leider, who is in charge of elections and voter registration there, said the city’s reading of Census Bureau information showed the number of voting-age adults surpassed the number of registered voters. So, city officials disagreed with the Virginia Voters Alliance on that point, she said.

“We provided them with all of the information they have requested,” Leider told The Daily Signal in a phone interview, referring to the alliance.

In Alexandria, election officials have removed 70 noncitizens from the voter rolls since January 2012, Leider said.

Separate from the Alexandria lawsuit, the legal foundation obtained voter information from seven of the 20 counties it is investigating.

Of the data available, the largest number of noncitizens registered to vote was in Prince William County, about 400 since 2011, before officials removed them from the rolls, Johnson said.

Other jurisdictions providing information to the Public Interest Legal Foundation were the city of Fairfax and the counties of Bedford, Hanover, Roanoke, and Stafford, which combined had about 150 noncitizens registered to vote.

Virginia has moved from being a reliably Republican state in presidential elections to twice voting for President Barack Obama. This shift has prompted Democrats and Republicans to contest it as a swing state.

In June, U.S. District Judge Leonie M. Brinkema of the Eastern District of Virginia, who was appointed by President Bill Clinton, dismissed the Virginia Voters Alliance lawsuit against Alexandria.

The lawsuit argued that Leider, the registrar, violated the National Voter Registration Act by not releasing records about city procedures for maintaining voter rolls, which the group said should be available for public inspection under the federal voter registration law. The alliance also asked that the rolls be cleaned up, in compliance with that law.

Martin Mash, spokesman for the Virginia Department of Elections, the agency supervised by the Board of Elections, at first told The Daily Signal that the department wouldn’t comment on pending litigation.

When The Daily Signal noted that the lawsuit had been dismissed, Mash again declined to comment. He referred questions on the matter to the office of Virginia Attorney General Mark Herring, which did not respond to phone and email inquiries. Herring is a Democrat.

The Public Interest Legal Foundation also has sought to know if these noncitizens voted in past elections, but said local governments haven’t provided the information.

“That is not done for any canceled voter registration, not for deceased [voters], not for people who have moved out of the state,” Leider said. “Past activity is not something we routinely check.”

It is a federal crime and a violation of Virginia law for noncitizens to vote.

In Virginia, a commonwealth’s attorney is equivalent to a district attorney or local prosecutor.

The federal voter registration law requires state and local election officials to “make available for public inspection and, where available, photocopying at a reasonable cost, all records concerning the implementation of programs and activities conducted for the purpose of ensuring the accuracy and currency of official lists of eligible voters.”

Hans von Spakovsky, a senior legal fellow with The Heritage Foundation, is a former member of both the election board in Fairfax County, Virginia, and the Federal Election Commission.

“Not a single one of those noncitizens, who committed a felony under federal law, has been prosecuted,” von Spakovsky said at a forum on voter fraud at The Heritage Foundation, referring to the findings of the legal foundation. “In fact, there is no indication that any of this information was ever turned over to law enforcement officials for investigation or prosecution.”

Von Spakovsky recently wrote that the Virginia State Board of Elections was engaged in a “cover-up”:

Numerous other Virginia counties have refused to provide this information to the Public Interest Legal Foundation, apparently based on instructions from the State Board of Elections and individuals working for the state Department of Elections, which the board supervises. This is what a cover-up directed by state election officials looks like. They are trying to hide hundreds, if not thousands, of instances of voter fraud that occurred on their watch.

If thousands of aliens are registered or actually voting, it would obviously undermine the national narrative that voter fraud is a myth. This would be particularly disturbing in a state like Virginia, in which statewide elections for attorney general have been decided by fewer than 1,000 votes in the last decade.