Why Pharmaceutical Companies Like Mylan Charge So Much for Drugs 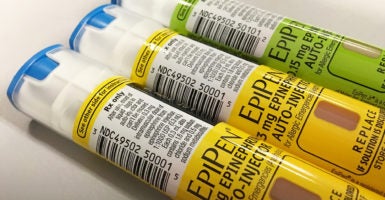 In a few years, Mylan more than quadrupled the price of its EpiPen anti-allergy device, prompting backlash from the public and congressional investigators. (Photo: Jim Bourg/Reuters/Newscom)

In the wake of news that pharmaceutical company Mylan quadrupled the price of its popular EpiPen anti-allergy device over a few years, lawmakers want to know why.

But rising drug prices for consumers isn’t a problem specific to Mylan and its epinephrine auto-injector.

Rather, research shows that generic drugs as well as brand name drugs have been going up in price.

According to some experts, it costs around $1 for the amount of epinephrine, a drug that treats allergic reactions, used in an auto-injector. But Mylan, which owns the EpiPen, increased the list price for a pack of two auto-injectors to $608.

Parents noticed the price hike over the summer when they began stocking up for the new school year. EpiPens have a shelf life of one year, so many schools and families purchase new packages as they’re gearing up for back to school.

But the price of the EpiPen has been increasing slowly since 2007, when Mylan first purchased the auto-injection device.

Today, an EpiPen package boasts a list price of more than $600, a 500 percent increase over seven years.

“[Mylan is] essentially taking advantage of the fact that they have the only product to provide this service, and they’re charging as much as they can for that service,” Gerard Anderson, a professor at Johns Hopkins Bloomberg School of Public Health, told The Daily Signal.

Though Mylan and its CEO, Heather Bresch, are the latest to bear the brunt of criticism from the media and congressional investigators—the House Oversight and Government Reform Committee held a hearing Wednesday during which Bresch testified—it’s not only the price of the EpiPen that has been rising.

The average price of insulin, the drug needed to treat diabetes, increased 300 percent between 2002 and 2013, according to an August report from the Journal of the American Medical Association.

The price of Isoproterenol, a drug that treats heart problems, was 2,500 percent higher in 2013 than in 2002. The price of Digoxin, used for blood pressure, went up 637 percent in the same period.

A 2014 report from Congress found the prices of seven generic drugs increased over the span of one year, with increases ranging from a high of 8,281 percent to a low of 420 percent.

Though brand name drugs account for just 10 percent of all prescription drugs in the U.S., they make up roughly 72 percent of drugs sold, JAMA found.

So with prescription medicines making up 17 percent of personal health care services, what leads to increases in drug prices and what can be done to lower prices?

Experts agree there is little transparency in how pharmaceutical companies price their products, and that was on display when Bresch testified Wednesday before lawmakers on the rising cost of EpiPens.

“If I could sum up this hearing, it would be that the numbers don’t add up,” Rep. Elijah Cummings, D-Md., the committee’s ranking member, told Bresch. “It is extremely difficult to believe that you’re making only $50 [per EpiPen] when you’ve just increased the price by more than $100.”

Lawmakers questioned Bresch, daughter of Sen. Joe Manchin, D-W.V., on just how much money Mylan was bringing in per EpiPen sold. They struggled to understand the justification for raising the price of the device by so much.

Mylan has pointed in the past to a long line of parties between the drug company and the customer as the reason for raising its prices.

The middlemen in the drug supply chain, primarily pharmacy benefit managers, help pharmaceutical companies sell their drugs, and in return, receive rebates from the company.

Pharmacy benefit managers are organizations that serve as the intermediary between consumers and drug companies, insurers, and pharmacies.

To help pay for those rebates, the drug companies increase the list prices of their products, Scott Gottlieb, a doctor and resident fellow at the American Enterprise Institute, explained earlier this month.

“This byzantine model for selling drugs aids both parties—the drugmakers who use the rebates to buy access on restrictive drug formularies, and the pharmacy benefit managers that take a cut from these rebates to improve their profit margins,” Gottlieb wrote in Forbes.

Formularies are a list of drugs that can be prescribed by practitioners.

In addition to the long line of middlemen receiving rebates from the pharmaceutical companies, drugmakers point to the high cost of research and development as a reason for boosting prices.

Cummings asked Bresch how much her company spent on research and development last year for the EpiPen.

Bresch said that since 2007, when Mylan purchased the EpiPen, the company had spent nearly $1 billion on research and development.

The company is working to extend the shelf life of the auto-injection device from one year to two years, Bresch said, and Mylan is planning to submit a request to the Federal Drug Administration in the coming days with a new formulation.

But the Mylan chief executive couldn’t provide a specific breakdown on the costs of research and development last year, which congressional investigators asked for.

“I feel like you are not giving me the answers,” Cummings told Bresch. “In fairness to us, you knew what this hearing was about. You knew what our concerns are.”

A lack of transparency surrounding research and development costs is a cause of concern for experts who advocate lowering drug prices.

“The drug companies clearly need to do research and development,” Rodney Whitlock, a policy adviser for the Campaign for Sustainable Rx Pricing, told The Daily Signal. “That’s how they stay afloat and that’s how they make the new drugs, and those produce good outcomes for patients.”

But Whitlock said because pharmaceutical companies aren’t up front with the costs of research and development, it makes their narrative “logical” but not “reasonably verifiable.”

Instead, Whitlock said, a better question for drug companies is the role market analysts and investors play in the higher prices for medicines.

“I know there are people out there who believe they can raise the drug prices, but it’s also are they under pressure by market analysts who care about their earnings reports and say they should?” he said. “I think that’s a fair thing to ask.”

The Campaign for Sustainable Rx Pricing is a coalition of organizations—including corporations, insurance companies, and trade groups—working to lower drug prices.

“The simple answer is it’s a very good public relations argument for [drugmakers], but they don’t really price on the basis of how much they’ve invested in research and development,” Anderson told The Daily Signal, adding:

The reason why it can’t hurt is because more information is better, but it can’t help because since they’re not pricing on the basis of R&D, knowing how much they’ve invested doesn’t give very much information. Heather Bresch, CEO of Mylan, testified before the House Oversight and Government Reform Committee. Mylan, which owns the EpiPen, raised the price of a package of two auto-injectors to $608. (Photo: Michael Reynolds/EPA/Newscom)

Getting Away With It

While some of the blame is put on companies such as Mylan for rising prices for medicines, experts and lawmakers agree the Food and Drug Administration plays a part.

The FDA, they say, has allowed Mylan to have a monopoly.

Although epinephrine is an old drug, Mylan holds a patent for its auto-injector. Several competitors have attempted to enter the market, but they haven’t been able to get off the ground.

Teva Pharmaceuticals said it would introduce a competitor to the EpiPen, but the FDA did not approve the product.

An alternative to the EpiPen already on the market, Adrenaclick, can cost as low as $140 after a discount, according to the website GoodRx.

Adrenaclick, though, isn’t always covered by insurance companies, according to Modern Healthcare, and EpiPen has more than 90 percent of the market share, making it more difficult for a competitor to break through.

The authors of the August JAMA report said the most effective way to reduce drug prices is by allowing generics to enter the market.

However, the approval process for generic drugs has been hampered by the FDA, experts say.

In an article for The Wall Street Journal in August, Gottlieb pointed to the agency’s 2009 decision to force generic pharmaceutical companies to make their production lines less complicated and alter their manufacturing plants.

Gottlieb said the changes caused many of these plants to close, which drove up prices.

Additionally, he said, it’s expensive for a company to file an FDA application to make a generic drug, costing as much as $15 million.

“New regulations have, in many cases, made it no longer economically viable for more than one generic firm to enter the market,” he wrote.

Currently, the FDA has a backlog of applications awaiting approval.

Dr. Doug Throckmorton, deputy director of the Center for Drug Evaluation and Research at the FDA, told lawmakers on the oversight committee that the agency had reduced the backlog. He said he couldn’t provide information about how many auto-injection products were in the queue waiting for FDA approval.

Throckmorton did say his agency is working to “streamline and improve its review and approval of generic drug applications.”

“We take our role seriously,” he said.

In the wake of the backlash Mylan received after hiking the price of the EpiPen, the company announced last month it would be developing its own generic.

The price, the company said, would be $300 for a pack of two. It also said it would offer a $300 savings coupon to patients buying EpiPens who have insurance.

But some experts aren’t buying Mylan’s efforts to lower the price.