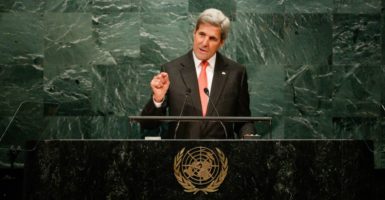 Secretary of State John Kerry called for people all over the world to “become warriors for the planet.” (Photo: Chine Nouvelle/SIPA/Newscom)

Thirty-one countries joined the Paris global warming agreement this week, officially committing to the pact along with the United States and China.

The agreement is a top-down, concentrated effort to drive the price of conventional energy sources like coal, oil, and natural gas higher. It will prevent millions of citizens from enjoying basic energy needs, transferring mass amounts of wealth from developed countries to developing ones.

The total number of countries joining the agreement is now at 60, which, as The Associated Press reports, is “higher than the 55-country threshold needed for the treaty to enter into force. But because together those countries account for 48 percent of total global emissions—short of the 55 percent threshold—the agreement must wait for more nations to join.”

The key word here is “treaty.” The Paris Agreement is in form, in substance, and in the nature of its commitments a treaty. In order to be ratified by the United States, treaties are supposed to be sent to the Senate for review and consent. The Obama administration has shown nothing but disdain for the treaty-making process and the role of the Senate by completely evading their participation.

Americans are currently reaping the benefits of lower energy bills. According to the Bureau of Labor Statistics, since June 2014, lower oil and gas prices have directly lowered the cost of living—even as other components like food and housing have increased.

As a result, American households and businesses will incur higher energy costs. Americans will be hit repeatedly with higher prices as businesses pass increased costs on to consumers. Absorbing the costs of pricier energy will prevent businesses from investing and expanding.

Unsurprisingly, Secretary of State John Kerry applauded the recent list of signees. He called for people all over the world to “become warriors for the planet.”

But they’ll be fighting a costly, ineffective battle. Kerry admitted as much a few months ago during the negotiations in December, saying, “If all the industrial nations went down to zero emissions—remember what I just said, all the industrial emissions went down to zero emissions—it wouldn’t be enough, not when more than 65 percent of the world’s carbon pollution comes from the developing world.”

Though major carbon dioxide-emitting developing countries like China and Brazil have signed on to the Paris Agreement, whether they will curb economic growth to make the necessary emissions cuts is a completely different story.

After all, China can continue to allow emissions to grow significantly, only committing to peak emissions in 2030. They’ve already lied about how much carbon dioxide they’re pumping out now. And although they have scrubbers installed on their power plants to curb actual hazardous air pollutants, they do not use them because cheaper energy is more important to the Chinese government. Very little evidence exists that China will follow through with its promise. Nor has India promised any substantial cuts.

We should celebrate—not demonize—the use of coal, oil, and natural gas. The use of conventional fuels has assisted in lifting billions of people out of poverty. They are a critical input for plastics, fertilizers, chemicals, medicines, medical technologies, transportation, and heating and cooling homes, to name a few uses.

Thanks to the use of conventional fuels, you are 50 times less likely to die from a climate-related event like a heat wave, drought, or flood than you were 80 years ago.

That’s progress. Why would we want to reverse it?