This Judge’s Decision Was Wrong: It’s Not Racist to Not Have Straight-Ticket Voting 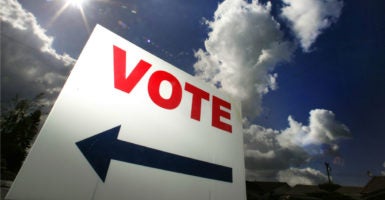 A federal district court in Michigan has ruled that eliminating straight-ticket voting is a restriction on the fundamental constitutional right to vote and a violation of the Voting Rights Act. (Photo: Bruce Chambers /Zuma Press/Newscom)

Is a right to straight-ticket (also known as straight-party) voting guaranteed under the Constitution or the Voting Rights Act?

The U.S. Supreme Court’s recent denial of a stay (over the objections of Justices Samuel Alito and Clarence Thomas) of that erroneous decision means that Michigan residents must have a straight-party option in November, despite the Michigan legislature’s law stating otherwise.

Straight-ticket (or straight-party) voting allows a voter to mark one bubble on a ballot indicating a vote for all the candidates of a particular political party rather than individually selecting a candidate for each office.

The straight-ticket option in Michigan was removed in 2015 by the state legislature. In response, the Michigan State A. Philip Randolph Institute filed a lawsuit claiming that the removal of straight-party voting “impermissibly burdens the right to vote under the Equal Protection Clause of the Fourteenth Amendment and Section 2 of the Voting Rights Act.” Judge Gershwin A. Drain, a President Barack Obama appointee, agreed and granted a preliminary injunction against the change.

Without straight-party voting, wait times at polling places would supposedly increase and potentially discourage black voters from voting. According to the Institute and the court, this qualifies as a violation under Section 2 of the Voting Rights Act because it would have a “disparate impact” on black residents of Michigan.

All of this was pure speculation on the part of the challengers and the judge. A study released in 2013 on average wait times for voters across the country ranged from a low of about two minutes to a high of almost 40 minutes; the average wait time for two-thirds of voters was less than 10 minutes.

Georgia, with no straight-ticket voting and a black population of more than 31 percent (about double that of Michigan’s), only had a wait time in the 2012 election of about 16 to 17 minutes. The idea that having to wait 16 to 17 minutes to vote will keep people, particularly African-Americans, from voting is ridiculous.

The institute didn’t come close to proving all of the factors needed to show a violation of Section 2 of the Voting Rights Act. The institute’s arguments and the judge’s conclusion are also based on a very patronizing, almost racist view of the black residents of Michigan: that they are not as capable as other voters of marking a ballot without straight-ticket voting and don’t have the patience to wait 20 minutes to vote.

Georgia eliminated straight-ticket voting in 1994 when the state was completely controlled by the Democratic Party. At the time, that change had to be submitted to the U.S. Justice Department to comply with the preclearance requirement of Section 5 of the Voting Rights Act.

In August 1994, the Clinton administration’s Civil Rights Division sent Georgia Attorney General Michael Bowers a letter clearing the change, having concluded that it would have no discriminatory effect on black voters.

The Clinton administration certainly didn’t think that the elimination of straight-ticket voting was in any way discriminatory, and it was not exactly shy about claiming violations of the Voting Rights Act during President Bill Clinton’s eight years in office. Clearly, straight-party voting is not required for any qualified voter in Michigan to fully exercise his or her right to vote, regardless of race or color.

Drain’s legal reasoning in this case has absurd implications. It means the 41 states that don’t have straight-ticket voting are all apparently violating the Constitution and discriminating against their minority voters under the Voting Rights Act.

Moreover, this case exemplifies how the dubious legal theory of disparate impact is being used (and abused) to make or stop changes in election administration.

These changes have nothing to do with discriminatory conduct or any violation of the fundamental right to vote. But this case has everything to do with partisan advocacy organizations and judges wanting to use the power of the courts to implement their own policy choices in how elections are administered and what rules govern registration and voting.

The Michigan case is just the latest in a litany of recent cases on voter ID, early voting, same-day registration, and other administrative rules that have used the same flawed reasoning to come to unsound conclusions that defy the Constitution, legal precedent, and common sense. Unfortunately, given the makeup of the federal courts today, it’s unlikely to be the last.