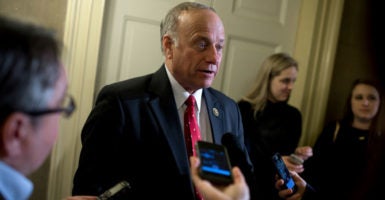 Before lawmakers in the House could read the Senate’s plan to fund the government after the end of the month, Rep. Steve King, R-Iowa, was dismissing the measure out of hand, calling it “unconstitutional.”

Congress is trying to hammer out a compromise to extend federal funding before the government’s annual spending authority expires Oct. 1. But King complained that GOP leadership, in the process, is furthering President Barack Obama’s executive actions to grant amnesty to millions of illegal immigrants.

The Iowa Republican has drafted an alternative spending package. And although he admits his plan isn’t likely to pass, he says it provides a conservative benchmark that contrasts with the short-term spending solution pushed by GOP leadership in both the House and Senate.

Shortly afterward, King predicted that Senate Republicans’ package could not pass the House without Democrats’ support.

“A greater percentage of Democrats will vote for this [short-term spending measure] than the percentage of Republicans in the House,” King said. “I think that’s true, and to me that says there’s not a reason to hold back and put an alternative down.”

That alternative, which King said he would introduce Friday, is further to the right than anything proposed previously, even by the conservative House Freedom Caucus and the much larger Republican Study Committee.

His plan is meant to serve as a “benchmark,” King said, to show what’s possible if Republicans keep both chambers of Congress and retake the White House in the Nov. 8 elections.

It contrasts with the Senate measure, unveiled Thursday, which locks in spending at the current $1.07 trillion level until Dec. 9 and doesn’t include any of the policy riders conservatives have pushed. The Dec. 9 expiration date would mean that defeated or retiring lawmakers, who don’t leave until January, would vote on a new measure to continue to fund the government.

On the fiscal front, the King plan adopts a spending position that even conservatives abandoned as politically impractical this year. It would lock in a government spending level of $1.04 trillion, nearly a $30 billion reduction from the current level.

The plan, some of which reads like a carbon copy of the Republican Party’s 2016 platform, calls for repealing 14 of Obama’s marquee accomplishments.

King proposes to defund Obamacare, the Dodd-Frank regulation of the financial industry, and the Environmental Protection Agency’s Clean Power Plan. He calls for barring resettlement of refugees in the U.S., halting implementation of the nuclear deal with Iran, and stopping the transfer of internet regulation from a U.S. agency to a global body.

The King plan also would halt funds for executive enforcement of the Supreme Court decision legalizing same-sex marriage and the Department of Education’s transgender bathroom directive to schools that receive federal funds. It would block federal funding of Planned Parenthood and implementation of the EPA’s Waters of the United States regulation.

And it would take aim at the Obama administration’s executive orders relaxing immigration enforcement and implementation of the Paris accords on climate change.

King admits the “odds of succeeding aren’t good” for his grab bag of conservative priorities. But that’s not the goal, he told The Daily Signal:

It puts a marker down that says to the negotiators that there are a core of people here who actually believe in our platform and our conservative principles, and we’re just not willing to walk away without expressing them.