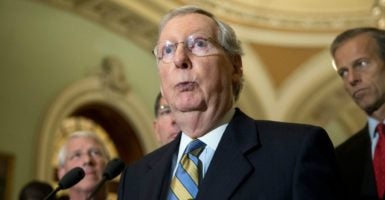 After voting to proceed to a bill that didn’t exist earlier this week, the Senate has finally produced text of the continuing resolution, a short-term government spending bill.

The bill, written behind closed doors by Senate Majority Leader Mitch McConnell, was brought to the floor late Thursday afternoon, and for the majority of Senate Republicans, represented their first opportunity to see the text. According to McConnell, senators will have four days (two of them on a weekend) to review the bill before having to cast their votes next week.

As far as conservative priorities go, the bill is a failure. Among its many obvious flaws, it funds the government through Dec. 9—setting up a lame-duck session of Congress.

In the lame-duck session, which occurs after the election but before new lawmakers are sworn in, unaccountable legislators are likely to pass a bevy of backroom deals, to the detriment of representative democracy (and, we can assume, to the wallets of the taxpayer).

Even though it only funds the government for a scant 69 days, the McConnell continuing resolution manages to do it at the bloated Boehner-Obama spending levels that were jammed down the throats of conservatives in 2015.

In doing so, the continuing resolution sets up yet another spending cliff that will spawn a false panic in the lame-duck session, and lay the groundwork for more “must-pass” terrible deals. In other words, in December, lawmakers will once more have to pass yet another spending bill in order to ensure the government continues normal operations.

Worse still, this continuing resolution fundamentally grows government. The bill includes $500 million for the Federal Emergency Management Agency to address flooding in Louisiana—despite the $12 billion the agency already has.

Furthermore, it grants President Barack Obama vast new hiring authority, so he can bring in a bunch of bureaucrats to burrow into federal agencies right before he leaves office.

This short-term continuing resolution contains nothing for conservatives to be happy about. It hands Democrats victories while ignoring conservative priorities and growing government.

The most troubling elements of the McConnell continuing resolution, however, come down to policy. Conservative priorities are abandoned—or outright ignored—while liberal policies are given priority.

Conservatives in the House and Senate have long been focused on delaying the Internet Corporation for Assigned Names and Numbers (ICANN) transition—the deal that will pass governance of the internet from the United States to a “multi-stakeholder community” that includes authoritarian countries like Russia, China, and Iran.

Despite a multitude of congressional hearings and engagement from key Senate Republicans, McConnell chose not to address the ICANN transition—and in doing so, will allow it to proceed as scheduled on Oct. 1.

Perhaps the biggest slap in the face to conservatives, however, is the bill’s treatment of emergency funding to address the Zika virus. Whether or not Planned Parenthood—America’s largest abortion provider—would receive access to the Zika funding was a key sticking point in negotiations of the continuing resolution, with Democrats insisting that Planned Parenthood be able to access Zika funding, and conservatives in the House and Senate demanding that they be barred from doing so.

Yes, you read that right. Under the funding bill written by the Senate majority leader, Planned Parenthood can get a raise.

How? According to analysis by The Heritage Foundation’s Roger Severino, Planned Parenthood already receives over $500 million in taxpayer money every year (legally, this money must be spent on family planning services other than abortion).

This state of play was confirmed earlier this week in press reports of Democrats publicly gloating over their win. With McConnell’s office silent on the state of negotiations, the Democrat leader in waiting, Sen. Chuck Schumer, D-N.Y., told Congressional Quarterly that the “Zika issue has been resolved” because GOP negotiators were “dropping all their riders.”

This short-term continuing resolution contains nothing for conservatives to be happy about. It hands Democrats victories while ignoring conservative priorities and growing government.

The fact that Senate leadership would put this type of bill forward now—before they have to face the voters in November—should raise serious concerns about what they intend to try and pass in the lame-duck session, when even fewer people will be watching.