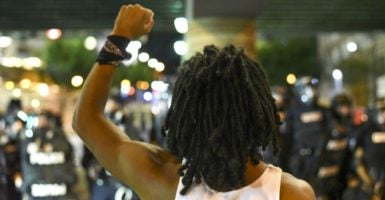 Like too many other similar incidents, the protests ultimately turned into riots, and widespread looting and violence ensued.

Justice for what, exactly, is unknown at this point. The question remains unanswerable because, much like the recent police-involved shooting and subsequent unrest in Milwaukee, protesters and rioters took to the streets before virtually any of the facts or circumstances surrounding the incident were revealed.

Social media again proved itself an amazing conduit for the promotion of potentially dangerous misinformation as rumors quickly spread through Twitter and Facebook that Scott was unarmed at the time of his death.

Protesters held aloft signs that read, “It was a book,” echoing a rumor that Scott had been holding a book at the time of the shooting—a narrative the media was quick to spread even without any corroborating evidence outside of rumor and conjecture.

Police, however, quickly pointed out a very different version of events than the mainstream and social media-driven narrative.

Charlotte-Mecklenburg Police Chief Kerr Putney told the media that Scott was in fact armed with a gun when police officers encountered him. Putney further stated that Scott was given several commands to drop his weapon, but that he did not comply. Only after Scott posed an “imminent deadly threat” did a police officer open fire.

What is occurring in Charlotte continues not only to erode police and community relations, but also to make the job of the average police officer more difficult and dangerous.

It was also later revealed that both Scott and the officer involved in the shooting, Brentley Vinson, were African-American.

But, as has sadly been the case in numerous similar events, neither facts nor reason could stop some people from the rush to condemn law enforcement and engage in violence. During the first night of rioting, 16 police officers were injured as rioters hurled rocks and other items at officers on the line.

On Wednesday night, during the second night of violent unrest, multiple people were reported injured—including one critically after allegedly being shot by another protester—and dozens of protesters took over Interstate 277, blocking traffic.

The resulting violence prompted North Carolina Gov. Pat McCrory, at the apparent urging of Putney, to declare a state of emergency and initiate the National Guard and State Highway Patrol to help local police contain the violence.

McCrory added in a statement, “Any violence directed toward our citizens or police officers or destruction of property should not be tolerated.”

What is occurring in Charlotte—an immediate rush to judgment and condemnation of an officer’s actions followed by rampant violence and civil unrest—continues not only to erode police and community relations, but also to make the job of the average police officer more difficult and dangerous.

As a profession, law enforcement is arguably experiencing its most difficult period since the late 1960s and early 1970s, and the continued demagoguery aimed at the American police officer does not bode well for the health and safety of our nation’s communities.