What Obama’s Education Secretary Got Wrong About Homeschoolers 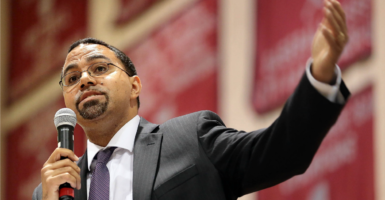 In remarks Wednesday, Education Secretary John King told the audience he worries that homeschooled students aren’t “getting the range of options that are good for all kids.” (Photo: Jim Weber/ZUMA Press/Newscom)

Homeschooling has been growing in popularity in recent years, and now accounts for about 3.4 percent of the school-age population. That’s more than double the percentage (1.7 percent) of homeschooling families in 1999.

That’s great news for families who have chosen to give a customized, tailor-made education to their children, and for the millions of families across the country whose children are thriving as a result of choosing to homeschool.

Yet, in remarks Wednesday to reporters at a breakfast hosted by The Christian Science Monitor, Education Secretary John King—although he conceded that there are homeschooling families who are doing well—told the audience he worries that homeschooled students aren’t “getting the range of options that are good for all kids.” According to Politico:

King said he worries that ‘students who are homeschooled are not getting kind of the rapid instructional experience they would get in school’—unless parents are “very intentional about it”.

King said the school experience includes building relationships with peers, teachers and mentors—elements which are difficult to achieve in homeschooling, he said, unless parents focus on it.

King’s statement that he is concerned that homeschooled students are not getting the “rapid instructional experience they would get in school” is problematic on several fronts.

First, it assumes homeschooled students are not in school. As Milton Friedman famously quipped in “Free to Choose,” “not all ‘schooling’ is education and not all ‘education’ is schooling.”

Many homeschooled students attend some of the most rigorous and intellectually challenging schooling there is. Many families pursue a rigorous classical curriculum. Others choose to homeschool because their children wanted more challenging options than their assigned public school provided.

Second, let’s examine what King refers to as the “rapid instructional experience” students receive in the aggregate in K-12 education today.

According to the most recent National Assessment of Educational Progress, administered by the U.S. Department of Education, just one-third of all eighth-graders in public schools can read proficiently. Roughly two out of 10 students don’t graduate high school at all. The United States ranks in the middle of the pack on international assessments such as the Program for International Student Assessment. In short: There is significant room for improvement in the traditional public education system.

The ubiquity of the internet means parents who homeschool have a wide world of academic content available at their fingertips, including everything from online college prep courses to computer coding academies, as well as a means of connecting with other homeschooling families.

One of the catalysts behind the growth in homeschooling is a sense among many parents that public education is not meeting the needs of their children.

Recent federal efforts to establish national standards and tests through Common Core have heightened concerns among many parents that they no longer have a seat at the table when it comes to what is taught in their child’s public school. And math and English language arts scholars have repeatedly voiced concerns that Common Core fails to prepare students for college.

Government education bureaucrats are right to worry about homeschooling—but not for the reasons King set forth. It is more likely they are worried that parents—whether empowered to homeschool or to select from the some 59 education choice programs now in place—will choose something other than a government education provider.