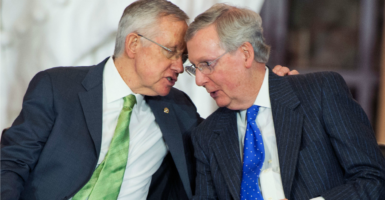 The Mitch McConnell-Harry Reid era has witnessed a Senate that is less transparent, where individual members are less aware of their rights, and where there is a growing centralization of power in the leader’s office. (Photo: Tom Williams/CQ Roll Call/Newscom)

On Tuesday night, the Senate voted to proceed to the continuing resolution, a bill that will allegedly fund the government until Dec. 9.

The only problem is that there isn’t actually a bill yet.

There is no text. There is no agreement between Democrats and Republicans on what the bill will fund—Planned Parenthood, the Export-Import Bank, control of the internet—all of it remains a mystery.

Yet the Senate voted 89-7 to proceed to this nonexistent bill.

The Senate operates under complex parliamentary rules that require a series of votes in order to “proceed to” or “get onto” a bill. The vote Tuesday night was the first in what will be a series of votes on the continuing resolution, or spending bill.

Despite Senate leadership’s protests to the contrary, a vote to proceed to a bill that’s not yet written is, in fact, a substantive act—particularly when there is so much at stake.

And Senate leadership tried to pitch this as simply a process vote. Sen. Mitch McConnell’s, R-Ky., communications director tweeted that this vote was “just procedural” and “not a vote on the CR [continuing resolution]” or on Zika funding. Various reporters tweeted that this was just a vote on a “shell bill,” and that the text of the continuing resolution would be crafted at a later date.

This is a procedural vote, not a vote on the CR/#Zika bill.

But the fact still remains: On Tuesday, the Senate voted to proceed to a bill that does not yet exist.

Forget not being able to read it, or not having time to digest the policy at hand. The bill does not exist.

Despite Senate leadership’s protests to the contrary, a vote to proceed to a bill that’s not yet written is, in fact, a substantive act—particularly when there is so much at stake. The continuing resolution will be the battleground for major policies, like whether or not Planned Parenthood will receive Zika funding, if the Export-Import Bank can send taxpayer dollars to fund Boeing deals with Iran, or if the U.S. will lose control of the Internet.

All of these deals have yet to be struck (although press reports suggest that Republicans have already caved to Democrats on Planned Parenthood funding).

What the Senate did Tuesday was to give the go-ahead to Senate leadership to strike those deals on its behalf. Each of the 89 senators who voted to proceed to text that they’ve never seen yielded their authority to have input on the deal, to influence the outcome of a major funding bill.

This is not just a procedural vote, and it is wrong to describe it as such. Voting to proceed to a bill is as much a substantive act as voting on the bill—different, but still substantive. In this case, the Senate voted to proceed to whatever backroom deal its leadership happens to strike.

As Sen. James Lankford, R-Okla., explained his “no” vote to Congressional Quarterly, “We don’t have that text yet. It’s important that we do have that and we do know the direction that it’s going when we get to that spot.”

Lankford is right about why senators must have text before beginning any vote series, procedural or otherwise—you can’t approve the start of a process without knowing first where it’s going to end.

The Mitch McConnell-Harry Reid era has witnessed a Senate that is less transparent, where individual members are less aware of their rights, and where there is a growing centralization of power in the leader’s office. Tuesday’s vote was another step in that direction.

Individual senators are all equal in authority—with the same rights and the same access to the Senate rules. Senators would do well to keep that in mind next time their leadership says, “Trust us,” and tells them to approve moving forward on a bill they have yet to see.