What’s at Stake in the Next Supreme Court Term 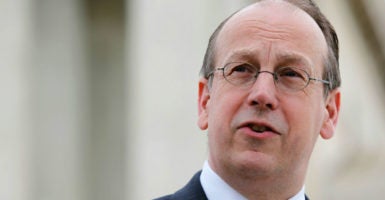 Paul Clement, the 43rd U.S. solicitor general, along with another top litigator, previewed the 2016-17 Supreme Court term at The Heritage Foundation on Sept. 20, 2016. (Photo: Jonathan Ernst/Reuters/Newscom)

The next Supreme Court term is beginning Oct. 3—and there’s plenty of contentious issues on the docket for the eight justices to rule on.

“But the upcoming term has the potential to become an important year for property rights, the separation of powers, and copyright law.”

At an event at The Heritage Foundation on Tuesday, Paul Clement, a former solicitor general of the United States, said, “It is a very interesting time at the court.”

“That doesn’t automatically translate into interesting cases,” he added.

“The upcoming term has the potential to become an important year for property rights, the separation of powers, and copyright law.”
—@Heritage

The 2016-17 Supreme Court term begins on Oct. 3. Justices agree to hear about 1 percent, or roughly 70 cases, out of approximately 7,000 petitions for review they receive each year, according to Heritage research. Already the court has agreed to hear arguments for 31 cases and oral arguments are set for 19 cases in October and November.

“It’s certainly right that the court seems to be reluctant to add cases to their docket that they think in advance may well divide them four to four,” Clement said.

Here are three key cases the Supreme Court will hear in its next term.

This case is about four siblings who own two adjacent waterfront properties. Their parents built a cabin on the first lot after obtaining the parcels separately in the 1960s. The siblings, decades later, looked into developing or selling the second lot and found that zoning regulations prevented them from doing so and that the state considered both lots to be one property.

“As it turns out under state law not only can they not sell the one parcel, but they are not even allowed now to develop the other parcel, which it seems to me about the most extreme regulatory scheme you can devise,” Carter Phillips, a former assistant to the solicitor general, said at the Heritage event.

Clement and and Phillips have each argued more than 80 cases before the Supreme Court.

Phillips said this case seems “unbelievably unfair” and that sometimes the government goes too far in its “regulatory scheme.”

The case has not been scheduled for oral argument.

“When you buy new tires in the state of Missouri … you pay a small tax and that goes into a fund. What that fund helps do is take used tires and instead of having them fill up landfills where they create all sorts of problems, those get sort of shredded and treated and then they get used to make playgrounds for children safer,” Clement said.

In Trinity Lutheran Church of Columbia, Inc. v. Pauley, one of the likely highlights for the term, Trinity Lutheran Church in Missouri applied for a state-funded grant to install a rubber playground surface for the church’s daycare and preschool. The state denied its application on the basis that it was a religious institution.

Oral argument for the case have not been scheduled, but Clement said this is a “very important case.”

“This is perhaps the best example of a case that the court is taking a really long time to schedule for oral argument,” Clement said. “This case was granted in the same sitting where a number of cases were granted last year and scheduled and argued and decided already.”

Clement predicted there could be a closely divided court on this case.

“It does seem like the most logical inference is this is a case where the court is going to take its time scheduling this in the hopes that they might have nine justices to decide the case,” he said.

Another case this term concerns the president’s power to fill vacancies in government roles. Under the Constitution, the Senate must provide “advice and consent” before the president can appoint officers.

However, the president can nominate “acting” officers to high-level federal offices before the Senate has acted, although federal law limits the length of time such officers can serve and who can be appointed.

President Obama appointed Solomon as Acting General Counsel in 2010 and also nominated him for the permanent post in 2011. This issue came up in the course of an unfair labor practice charge against SW General, Inc., a company that provides emergency medical services to hospitals; the company asserted that Solomon was serving in violation of the [Federal Vacancies Reform Act].

The case is scheduled for oral argument on Nov. 7. According to Slattery and Bates, “the outcome of this case could have broad and long-reaching effects for the separation of powers and on federal agencies’ actions if their high-level officials were appointed in violation of” the Federal Vacancies Reform Act.

Additional cases that could come up for review by the Supreme Court, according to Heritage research, could be about the Washington Redskins’ trademark, another Obamacare challenge, and the issue of schools’ bathroom policies for transgender students.