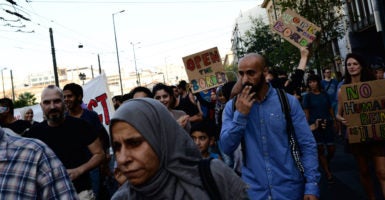 As President Barack Obama used his final address before the United Nations General Assembly to urge world leaders to help protect refugees, Republicans in Congress threatened to use their budget powers to restrict who is admitted into the U.S.

While refugee resettlement has enjoyed bipartisan support in Congress historically, some Republicans want confirmation from U.S. intelligence leaders that screening procedures are strong enough to warrant a major American commitment to accepting more refugees during a time of heightened terrorism fears.

Thirty-seven Republican House members wrote a letter to House leadership this week asking them to use a must-pass spending bill as a vehicle for language that would block federal funding to refugees from Syria, the Middle East, and North Africa until national security officials can guarantee that terrorists cannot infiltrate the screening process.

“This is a clear and present danger to the U.S.,” said Rep. Brian Babin, R-Texas, who has sponsored legislation pausing refugee resettlement from “terrorism hot-spots” to the U.S., and who signed onto the letter.

“I have great compassion for these poor folks fleeing civil war, but my first duty and this president’s first duty is to provide for the national security for our citizens,” Babin added in an interview with The Daily Signal. “We have our own children and grandchildren to be thinking of.”

“My first duty and this president’s first duty is to provide for the national security for our citizens,” says @RepBrianBabin.

Ahead of his speech Tuesday to the United Nations General Assembly in New York, Obama submitted his annual refugee report to Congress, outlining his plan to significantly increase the U.S. commitment to resettle refugees for the fiscal year starting Oct. 1.

The Obama administration plans to raise the number of refugees admitted to the U.S. to 110,000 in fiscal 2017 from 85,000 this fiscal year, representing a 30 percent increase.

The commitment, the administration said in the report, will include a “significantly higher” number of Syrian refugees fleeing Islamic State terrorists and the civil war there.

Last month, the administration exceeded its goal of admitting 10,000 Syrian refugees during fiscal 2016, which ends Sept. 30.

‘Issue of Life and Death’

Obama’s decision to admit more refugees comes during a time of great need, and drew cheers from refugee advocates.

According to the United Nations, a record 65 million people are currently displaced from their homes, and almost 5 million Syrians are refugees.

“The president is right to increase the U.S.’ admissions level by 30 percent because we are facing an unprecedented and broad refugee crisis in the world today,” said Kevin Appleby, senior director of international migration policy for the Center for Migration Studies.

“Less than 1 percent of refugees are ultimately resettled across the world,” Appleby told The Daily Signal in an interview. “Those are the most vulnerable cases. The resettlement program is literally an issue of life and death.”

Administration officials and refugee advocates stress what they say is a strenuous vetting process for refugees coming to the U.S., especially Syrians.

Syrians must pass multiple layers of security checks, including an extra step beyond those required of refugees of other nationalities, according to the State Department.

The process can take up to two years.

“The refugee program is probably the safest and most secure program we have for new arrivals,” Appleby said, adding:

We take in refugees in a much different way than Europe. We interview them overseas, and they are well vetted before they even get in a lane to arrive in the U.S. If any of the security checks show some sort of violation and risk, more than likely the refugee won’t be resettled. The rule is to err on the side of safety. In what is expected to be his final address before the United Nations General Assembly, President Obama urges more global cooperation in helping refugees. (Photo: Peter Foley/CNP/AdMedia/SIPA/Newscom)

Obama administration officials also argue that pausing the U.S.’ acceptance of refugees helps make the case for terrorist groups such as the Islamic State that seek to turn Muslims against the West.

“The Sunni extremist elements that we are fighting in places like Iraq, Syria, Yemen, and Somalia watch carefully what we say and do, and if the U.S. were to shut off refugee flows from countries like that, the extremist groups would say the Americans are anti-Muslim and they would use that to boost their recruitment,” said Robert Ford, who was the U.S. ambassador to Syria under Obama for four years, and now is a senior fellow at the Middle East Institute.

ISIS and other terrorist groups will seize on such a policy in recruiting, Ford said in an interview with The Daily Signal.

“It makes no sense to have a policy to say we are going to fight extremists militarily, but to follow with a political refugee policy that fosters the recruitment [by] the very groups we are fighting,” he said. “Instead, the refugee political message needs to be in harmony with the military efforts.”

With Congress in control of the funding for refugee resettlement, Republicans say their concerns over vetting procedures for admitting refugees to the U.S. outweigh other concerns, and that they need more assurances the program cannot be infiltrated by Islamic extremists.

In calling for stronger vetting, these critics have pointed to testimony last year to Congress from FBI Director James Comey, in which he said there are challenges to how the U.S. screens refugees, specifically with the limitations in gathering intelligence in war-torn Syria.

Republicans also note recent terrorist attacks in Europe where some of the terrorists involved had posed as refugees.

“We have a new dimension on the national security front that we never faced before,” said Rep. Mark Meadows, R-N.C., in an interview with The Daily Signal.

“Where in the past refugees have come to the U.S. as a place of rescue and safety, now we have credible evidence that suggests that ISIS and other terror groups are trying to take advantage of our generosity and compassion. So that does necessitate a change in not only our priorities, but also the funding we allocate to this particular issue.”

Meadows is among members of the conservative House Freedom Caucus who have said they would support a government spending bill that expires in December, rather than later in the new year, if the legislation contains language pausing refugee resettlement.

The Freedom Caucus prefers the spending bill to run past the lame-duck session of Congress, but Meadows and other members say they’d abandon that position if their concerns over refugee resettlement were addressed.

A larger House conservative group, the Republican Study Committee, is also pushing congressional leadership to include a policy rider to the spending bill related to the refugee issue.

“A lot of us agree with the vast majority of Americans that we should be certain we can vet these refugees before we give them free access to the U.S.,” said Rep. Andy Harris, R-Md., a Freedom Caucus member who is running to become chairman of the Republican Study Committee.

“I believe a CR [continuing resolution to fund the government] should have a refugee component as part of it,” Harris told The Daily Signal in an interview, adding:

If the president wants to threaten to shut down the government because he wants to take in refugees who are not vetted, especially given what happened in New York and New Jersey, I’d like to see that argument against it.

The suspect in the New York and New Jersey bomb incidents over the weekend, Ahmad Khan Rahami, 28, is a naturalized citizen from Afghanistan who came to the U.S. as a child.

The offices of House leadership—Speaker Paul Ryan, R-Wis.; Majority Leader Kevin McCarthy, R-Calif.; and Appropriations Chairman Hal Rogers, R-Ky.—would not confirm to The Daily Signal that they would attach a refugee-related measure to the spending bill, citing the privacy of ongoing negotiations.

The Senate is widely expected to release its version of the spending bill before the House does. Sens. Ted Cruz, R-Texas, and Jeff Sessions, R-Ala., are among senators to speak out against Obama’s plan to take in more refugees this year.

But the Senate is not expected to address the issue in its version of the spending bill.

The office of Senate Majority Leader Mitch McConnell, R-Ky., did not respond to The Daily Signal’s request for comment.

Last year, the House, with the support of 47 Democrats—enough to have a veto-proof majority—passed a bill requiring tougher screening of refugees from Syria and Iraq. Senate Democrats blocked the bill from advancing, however, with only two voting to support it.

“I believe any proposals that should go into the CR are ones that can attract the votes to pass, and I don’t know if this refugee rider can get the votes in the Senate,” Dent told The Daily Signal in an interview, referring to the continuing resolution to fund the government.

“It’s important that those advocating for the refugee rider make a strong case to Senate Democrats to see if they would vote for it,” Dent said. “The bottom line is nothing will get inserted unless it can get agreement in the Senate, and everyone knows that or should know that.”