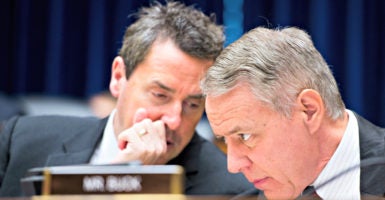 Bemoaning “insurer bailouts,” conservative groups warn of a possible fight in a lame-duck session of Congress over two programs written into Obamacare to give extra money to insurance companies.

Freedom Partners, a nonprofit chamber of commerce, launched a campaign last week urging lawmakers to allow the two Obamacare programs to expire, as they are set to do.

Their fear is that insurance companies and the Obama administration could persuade congressional leaders to extend the lifespans of the programs.

“The fact of the matter is government, at this point, is looking for any and every way in order to protect their interests, their legacy, which is Obamacare, and also give thanks and make sure their buddies, their cronies, and the special interests aren’t bailing out on these health exchanges,” Nathan Nascimento, senior policy adviser at Freedom Partners, told The Daily Signal, referring to insurance marketplaces set up under the Affordable Care Act.

Conservative groups say they are worried about the future of two programs, the risk corridor and reinsurance programs, written into the Affordable Care Act.

The government designed the programs to mitigate the risks insurers incurred by potentially covering consumers who were uninsured prior to Obamacare’s implementation.

Republicans, though, say the programs have served as a “bailout” for insurers struggling to turn a profit under the health care law.

“Insurers must, from [the administration’s] perspective, be prioritized because if insurers bail out of the exchanges, Obamacare can be deemed a failure, a complete and utter failure,” Nascimento said. “That’s the reason why we’ve seen a lot of these insurers pull out of the exchanges. They’re hemorrhaging dollars, and they’re not getting the love [from the government]. The only way to feel the love is to make sure they’re getting all the money.”

Keeping in line with Freedom Partners’ concerns, Heritage Action for America, the lobbying arm of The Heritage Foundation, warned against any changes to the programs.

“Rather than do the bidding of the insurance companies, conservatives should force President Obama and his congressional allies to explain Obamacare’s failures and why they want to funnel more taxpayer money into a failed law,” Mike Needham, chief executive officer of Heritage Action, said.

Despite comments from Democrats, Rep. Mark Walker, R-N.C., said, there is a “fear” of congressional leaders extending the risk corridor and reinsurance programs when they return to Washington after the election but before the next Congress is sworn in.

“That’s why we’re trying to make quite a hullabaloo of saying this is a gross injustice that’s burdening our constituents, the taxpayers, once again,” he told The Daily Signal.

Both the risk corridor and reinsurance programs expire at the end of the year, while a third, the risk adjustment program, is permanent.

The reinsurance program has received little attention from Republicans until recently, but GOP lawmakers limited the money available to insurers through the risk corridor program over the past two years.

During budget talks in 2014, Sen. Marco Rubio, R-Fla., led efforts to include a provision in a spending bill prohibiting the use of taxpayer dollars for the risk corridor program.

Because of Rubio’s amendment to the legislation, which also was included in a spending bill passed last year, insurance companies received just a fraction of the money—12.6 percent—they hoped to get from the risk corridor program.

Participating insurers received $2.5 billion less than they originally anticipated, and as a result of the shortfall, many of the smaller insurers selling coverage on the Obamacare exchanges closed their doors.

In January, insurers filed a class action lawsuit against the Obama administration for the lower-than-expected payments.

In the memo, the Department of Health and Human Services quietly called on Congress to secure more money for insurance companies through the risk corridor program.

Conservative groups say they worry that Congress could send more money to insurance companies for the risk corridor program during a lame-duck session, the period after the election and before new members are sworn in.

They also worry that the Justice Department could settle its lawsuit with insurers using something called the Judgment Fund, an indefinite appropriation created by Congress and administered by the Treasury Department.

“We could be looking at several billion dollars that could be given out unlawfully through fiat or by the courts to settle [the suit] and bypass Congress with taxpayer dollars,” Nascimento said.

Republicans on the House Energy and Commerce Committee sent a letter today to Health and Human Services Secretary Sylvia Mathews Burwell, raising concerns about the possibility of the Obama administration settling the lawsuits.

They said that would be a “direct circumvention of the clear congressional intent to prohibit the expenditure of federal dollars on this program.”

Unlike the risk corridor program, Republicans in Congress only recently have shifted their focus to the reinsurance program.

The Affordable Care Act calls for the Department of Health and Human Services to transfer a portion of insurers’ contributions to the reinsurance program to the U.S. Treasury, as well as to insurance companies.

However, conservatives say the department skirted the law by giving $5 billion to insurers, money they say was supposed to be transferred to the Treasury before the government made reinsurance payments.

Walker and Sen. Ben Sasse, R-Neb., both introduced bills that would force the Obama administration to deposit $5 billion to the Treasury by 2017 or face steep cuts to the Department of Health and Human Services’ departmental management fund both this year and next year under a new president.

“The [Department of Health and Human Services] is illegally diverting millions of dollars from the [reinsurance] program to the insurance companies instead of returning it to the taxpayers,” Walker said. “That’s a huge problem out of the gate, and it’s something we need to focus on.”

According to lobbying disclosures, insurance industry giants such as Blue Cross and Blue Shield Association, America’s Health Insurance Plans, and Anthem have been lobbying Congress to oppose the Walker-Sasse bill.

“In some ways, I don’t blame them for trying to cover their costs,” Walker said of the insurers. “Obviously with the premiums shooting sky high, with enough people not signing up and registered, they’re trying to save their backsides as well.”

“But we have to do what’s right by the American people by making sure we hold the line on something that’s been illegally diverting these billions of dollars,” he said.

In addition to opposing Walker’s legislation, one staffer for a Republican lawmaker told The Daily Signal that insurers have been asking for an extension of the risk corridor and reinsurance programs, which they say keep the health care law stable.