We Shouldn’t Give Away the Internet to Authoritarian Regimes 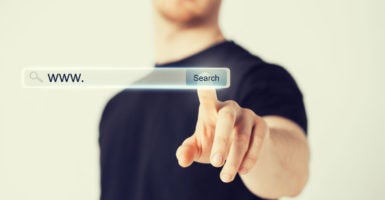 Some governments do not like ICANN’s current hands-off approach to internet regulation. They want more control over how internet traffic is managed and what domain names are allowed to exist. (Photo: Ingram Publishing /Newscom)

The essence of human freedom, of civilization itself, is cooperation: cooperation between friends and family; businesses and customers; entrepreneurs and employees.

History and human experience teach that humans cooperate best when they do so voluntarily, without government coercion. That is why I fully support the eventual transition of control over the internet from the Department of Commerce and to a private entity.

But I also worry that President Barack Obama is hastily rushing the current transfer of power to the Internet Corporation for Assigned Names and Numbers (ICANN), which could make it easier for the United Nations to take over the internet.

Today, the internet is so vast and ubiquitous that it is hard to imagine it existing in any other form. But for the first few decades of the internet’s existence, the basic roadmap for navigating the internet—the Internet Assigned Numbers Authority (IANA), the system that allocates and records the unique numerical addresses to computers—was managed by just one man on a voluntary basis.

In 1998, the Commerce Department began contracting with ICANN, a California nonprofit corporation, to take over management of IANA and the internet’s domain name system. For the most part, the Commerce Department has allowed ICANN to govern itself, but it has always maintained the authority to pull the nonprofit’s contract, which allowed the federal government to ensure that its contracting partner did not stray from its original mission.

But some governments do not like ICANN’s current hands-off approach to internet regulation. They want more control over how internet traffic is managed and what domain names are allowed to exist.

If we rush this transition and ICANN fails, it will be nearly impossible to get the internet back from the authoritarian regimes that are pushing for more control.

Just five years after ICANN was created, the United Nations established a Working Group on Internet Governance “to investigate and make proposals for action … on the governance of Internet.” And in 2012 at the World Conference on International Telecommunications, several authoritarian regimes—including Russia, China, and Saudi Arabia—called for the “sovereign right” of governments to “establish and implement public policy, including international policy, on matters of Internet governance.”

The United States firmly resisted these calls for more international control over the internet until 2013 when Edward Snowden leaked details of the National Security Agency’s surveillance program, which led the Obama administration to believe it could not maintain international support for the current system. So in March 2014, the Commerce Department announced it would be fully transferring the internet’s names and numbers functions to ICANN. In other words, the federal government would relinquish its leverage over ICANN by giving up its ability to renew—or threaten to cancel—ICANN’s contract.

Normally, I would applaud the loss of federal government leverage over a private entity. But in this case, there are some ominous signs that ICANN is not ready for the role it is about to take on.

ICANN is currently involved in litigation over alleged improper interference from governments who objected to how the organization awarded the .africa domain name. And the organization was recently admonished by an independent review panel for making decisions that were “cavalier” and “simply not credible” in relation to an application for domain names.

Also, it is unclear whether the new bylaws ICANN is set to adopt for the transition will be strong enough to prevent Russia and China from exerting more control over internet governance.

For these reasons, I am working closely with Sen. Ted Cruz, R-Texas, and other senators to delay the final transfer of internet governance to ICANN. There is no reason this transfer has to happen this year. There is no reason not to allow ICANN to work through its new governance structure on a trial basis for two years so we can make sure it will run smoothly and in a truly independent manner.

If we rush this transition and ICANN fails, it will be nearly impossible to get the internet back from the authoritarian regimes that are pushing for more control.

That is simply not a risk we can take.