Weekend Attacks Across US Show Need for Renewed Vigilance 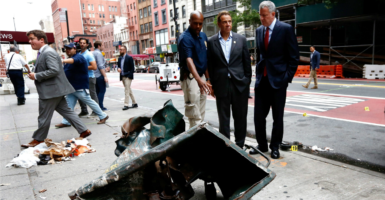 New York Mayor Bill de Blasio and New York Gov. Andrew Cuomo look over a mangled dumpster while touring the site of an explosion that occurred overnight in New York City. Over 20 people were injured in the blast. (Photo: Justin Lane/EPA/ Newscom)

A series of bombings in New Jersey and New York City, along with a mass stabbing at a mall outside Minneapolis, have many Americans rightly concerned today.

While these attacks appear unrelated, very little is known at the moment about the perpetrators and their motives. The FBI and local law enforcement are pursuing leads across the country to find those responsible and uncover the motivation behind these acts.

The Heritage Foundation will continue to monitor these cases. Not including these recent events, the U.S. homeland has faced 89 Islamist terror plots and attacks since 9/11 and 25 since the start of 2015.

In New York City, a bomb exploded in Manhattan, injuring 29 individuals. A second explosive device was found several blocks away. Police secured the device and removed it from the scene for further analysis and controlled demolition. New York authorities have called the act “intentional” and “terrorism.” While Gov. Andrew Cuomo initially claimed that the bombing didn’t appear to be related to international terrorism, he walked back that claim on Monday.

The FBI reportedly has captured Ahmad Khan Rahami, a 28-year-old U.S. citizen of Afghan descent, as a suspect in this case. Tragically, a police officer was shot in the process.

A pipe bomb exploded in Seaside Park on Saturday morning right before a Marine Corps charity run. Several other devices were believed to be wired to the initial pipe bomb but did not explode. The run was canceled as a result. The FBI is investigating the possibility of terrorism and authorities believe Rahami may have been involved in this bombing as well.

A pipe bomb was found at a train station in Elizabeth on Sunday night. FBI bomb robots were sent in to analyze and disarm a series of pipe bombs, but accidentally set one off. Thankfully, no one was injured. The other bombs did not explode and have been secured for further analysis. While authorities have not announced any suspects in this case, the use of multiple pipe bombs is similar to the Seaside Park case.

Authorities have not named the individual who injured nine individuals with a knife in a mall outside Minneapolis before an off-duty police officer shot and killed the attacker. The Amaq News Agency, which is linked to the Islamic State, claimed that the individual was a “soldier of the Islamic State.” St. Cloud police confirmed that at least one victim was asked if they were Muslim before being attacked.

The FBI is investigating the attack as a “potential act of terrorism,” but law enforcement has not finished their investigation into the motive of the attacker. However, given the evidence currently available, it is likely that this will be added to the Heritage terrorism timeline once more details are confirmed.

With many of the talking heads rushing to call these incidents acts of terrorism or deny they are terrorism, it is worth considering what terrorism is. While definitions differ, terrorism is the use or threat of symbolic violence (generally by nonstate actors) against innocent targets for a political, ideological, or religious ends.

In the case of primary terrorist threat the U.S. and the world faces from the Islamist terrorists, the objective of their violence is the imposition of a harsh definition of Islamic law, i.e. Sharia, across the world.

And so, motivation matters. Law enforcement is not just investigating the violence, methods, and acts of these attackers, but also why they did what they did. While the facts currently available indicate that at least some of these attacks may been committed for Islamist reasons, this motive has not been confirmed.

In the meantime, these incidents remind us that constant vigilance is necessary. We cannot become complacent as the threat of terrorism rises around the world. Instead, we must continue to ensure that U.S. intelligence and law enforcement organizations at federal, state, and local levels have the tools and information they need to stop terrorism before it strikes.