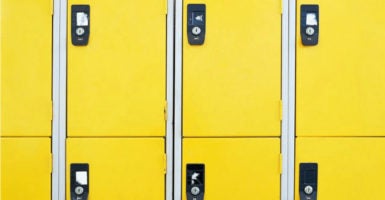 A male high school student in a Virginia suburb has told the state’s highest court that he became “distressed,” “nervous,” and “terrified” after the school board instituted a policy for transgender students.

The student and his parents unsuccessfully sued the Fairfax County School Board, and last week the Virginia Supreme Court agreed to take up their appeal.

“When school administrators give in to the Obama administration’s radical school shower and locker room policies, they should expect lawsuits from parents concerned by the unnecessary endangerment to their children’s privacy, safety, and innocence,” Roger Severino, director of the DeVos Center for Religion and Civil Society at The Heritage Foundation, told The Daily Signal.

“Jack Doe,” his parents “John and Jane Doe,” and Andrea Lafferty, president of the Traditional Values Coalition, filed a lawsuit over the Fairfax County school district’s nondiscrimination policy and the student handbook’s code of conduct.

The handbook lists discrimination by “gender identity” and “gender expression” as offenses for which students can be suspended from school.

The student referred to as Jack Doe—his lawyers have not revealed his name, age, or high school class—became distressed about issues such as using the school restroom and knowing how to interact and address other students, according to court papers.

Liberty Counsel, the nonprofit legal group representing him, filed the appeal May 19 after a lower court dismissed the lawsuit earlier this year. The state agreed to hear the case Sept. 12, but has not scheduled oral arguments.

A policy such as the one in Fairfax County Public Schools “puts people at risk and invades their personal privacy,” Mat Staver, founder and chairman of Liberty Counsel, told The Daily Signal in a telephone interview.

The policy is illegal and in violation of state law, Staver said. In a prepared statement, he added:

This is a matter of statewide and national concern. The fact that the Virginia Supreme Court decided to take up this case should be a warning to other local Virginia school boards and government bodies to back away from following the path of Fairfax County.

In May, the Obama administration issued a mandate to public schools across the country to accommodate transgender students. The mandate threatened to take away federal school funding if school districts did not, among other measures, open up bathrooms and locker rooms to individuals based on their chosen gender identity rather than their biological sex.

Texas and 12 other states sued the Obama administration over the “guidance.” In August, before the start of the school year, U.S. District Judge Reed O’Connor temporarily blocked the directive.

In total, 24 states are suing the administration over the transgender student mandate in three different lawsuits, as The Daily Signal previously reported.

The complaint in Fairfax County claims that Jack Doe was “particularly distressed” because gender identity is not defined in either the policy or code of conduct.

As a result, it says, the student “has no idea what words or conduct might be interpreted as discriminating on the basis of ‘gender identity,’ and therefore does not know what speech or conduct might subject him to discipline, including suspension.”

Under the Dillon Rule limiting the power of local governments in Virginia, the school board lacks authority to add these categories since the state has not included sexual orientation, gender identity, or gender expression as classifications under state law, Liberty Counsel argues. Its complaint says:

Because the new policy and code of conduct are not sufficiently defined, Jack Doe has no way of knowing whether he can, for example, question someone who appears to be a girl using the boys’ restroom or locker room, refer to someone by a certain pronoun or even compliment someone on his/her attire without being subject to discipline for ‘discrimination.’

“Our main argument is fairly simple,” Staver, who argued Aug. 31 before a three-judge panel of the Virginia Supreme Court for the court to take up the case, told The Daily Signal. “Virginia is like most states, including North Carolina—the categories of nondiscrimination must be uniform and they are only set by the state Legislature.”

The Fairfax County school system intends to “vigorously defend” the school board’s action before the Virginia Supreme Court. In a statement emailed to The Daily Signal, a spokesman said:

The Fairfax County School Board was well within its legal authority to adopt a policy that promotes dignity, respect, and equality for every … student and employee. The [school board] took action in response to an opinion from Virginia Attorney General Mark Herring, who said state law allows school boards to include sexual orientation and gender identity in their nondiscrimination policies.

Herring, a Democrat, declared in March 2015 that “not only do Virginia’s school boards have the authority to include gay and transgender employees and students in their nondiscrimination policies, they should,” James Parrish, executive director of the statewide LGBT advocacy organization Equality Virginia, said in an email to The Daily Signal.

“With this vested constitutional power, we believe the Fairfax County School Board has acted within its authority and not run afoul of Virginia’s Dillon Rule,” Parrish said, adding:

It should be a priority for schools to make sure every student is able to learn and thrive in a safe and respectful environment, and that includes transgender students. We applaud Fairfax County for their efforts to create learning environments that affirm the safety and dignity that every student deserves.

In the complaint, Jack Doe is described as distressed that school restrooms and locker rooms “will now be open to students who might have the physical features of one sex but are permitted to use the bathroom of the opposite sex which the student ‘identifies’ as, whatever that means.”

“The left will not stop until biological boys are given unfettered access to girls’ intimate facilities and vice versa,” —Roger Severino @Heritage

The youth also was nervous about having to think about “every statement or action and its potential sexual connotations to third parties before interacting with students and teachers,” the complaint says, and “terrified of the thought of having to share intimate spaces with students who have the physical features of a girl.”

The complaint adds that Jack Doe sees the school policy as an invasion of privacy, and “cannot regard school as a safe place where he can learn what he needs to be a productive and well-educated adult.”

The saddest part is that students dealing with gender identity issues can and have been treated sensitively and accommodated with private facilities, but the left calls that reasonable solution bigotry and will not stop until biological boys are given unfettered access to girls’ intimate facilities and vice versa.

The family uses pseudonyms in the case to protect their identities “because of the sensitive subject matter” of the case and “the likelihood of repercussions” for the youth because of the legal action, the complaint notes.

School transgender policies have the potential to apply on and off campus, Liberty Counsel’s Staver said.

If a school band or mixed cheerleading squad takes an overnight trip, for example, a gender identity policy “not only allows boys to use girls private facilities, but allows them to demand to be able to sleep in the same room with the girls,” Staver said.

“Any boy, whether they believe or not that they want to identify as a woman, could easily demand to be housed in the women’s room.”