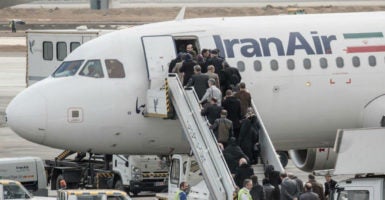 Let’s put two and two together, shall we?

For more than a year now, the U.S. Export-Import Bank has been limited to financing export deals of less than $10 million—a real hardship, evidently, for Ex-Im President Fred P. Hochberg and his buds who much prefer subsidies in the high nine digits for multinational corporations and foreign governments.

Alas, the bank charter requires that those big-dollar deals win approval from three members of the five-member board, which is a no-go these days, with only two board seats presently occupied.

On the upside, that leaves Ex-Im personnel more time to oversee the $102 billion in taxpayer-backed subsidies outstanding. These include a $5 billion loan to Sadara Chemical Co., a joint venture between Saudi Arabia, with a world’s top 10 gross domestic product of $1.6 trillion, and Dow Chemical Co., market cap $59.5 billion.

Meanwhile, after months of relative quiet on Capitol Hill, the Ex-Im issue has popped up front and center in congressional negotiations over a spending bill to keep the government running after Sept. 30.

The cronies are lobbying like there is no tomorrow for an appropriations “rider” that would quash the requirement that the Ex-Im board have a quorum of three (out of the five seats) in order to approve deals larger than $10 million.

To do so would be bad policy. The quorum ensures that no one person controls the billions of dollars in loans and loan guarantees doled out by the bank each year. That’s the very essence of America’s system of checks and balances.

Such a procedural stunt also would circumvent the legislative process that contributes to a full consideration of major policy change, and also override the Senate Banking Committee, which otherwise has jurisdiction over confirmations of Ex-Im board members.

Bank advocates such as Thomas Donohue, president of the U.S. Chamber of Commerce, insist that Ex-Im’s more generous subsidies are “vital to American businesses and their supply chains trying to compete in a fierce global economy.”

That’s a stretch. Ex-Im transactions benefit a mere 2 percent of U.S. exports and, until this year, overwhelmingly profited just a few multinational corporations.

And speaking of Iran: This latest effort to override Ex-Im’s charter just happens to coincide with news from Tehran that the Iranian government expects the U.S. Treasury to grant licenses by month’s end for Boeing Co. to sell the Islamic regime, the world’s foremost sponsor of state terrorism, a fleet of new jets.

The $17.6 billion deal between the aviation giant and Iran was made possible by President Barack Obama’s lifting of economic sanctions against Tehran in January. Under terms of a memorandum of agreement, Boeing reportedly will supply 80 planes—including intercontinental jumbo jets—to state-owned Iran Air. Financing for the purchase has not been announced.

Boeing (market cap $86 billion) long has been the principal beneficiary of Ex-Im largesse—until the bank lost its board quorum. But in fiscal year 2014 alone, the bank supplied more than $5.6 billion in taxpayer-backed loans and loan guarantees to foreign airlines on Boeing’s behalf, including:

All that taxpayer-backed financing for a single company, amounting to half of the total awarded during the entire year.

And that’s exactly the type of crony deal-making that is driving the U.S. Chamber of Commerce, the National Association of Manufacturers, and a bunch of other special interests to demand that Congress overrun the bank charter. The charter they all endorsed just nine months ago.

But now the special interests are chafing under the charter constraints that limit the size of Ex-Im subsidies. Those constraints interfere, for example, with deals as big as Boeing’s pending fleet sale to Iran’s terrorist regime.