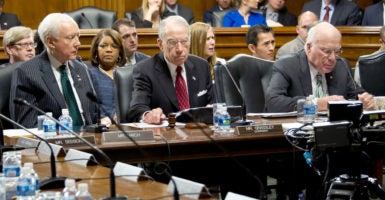 As President Barack Obama’s time in office nears its end, the Senate Judiciary Committee has advanced another one of his judicial nominees toward a lifetime post. She may not get to the finish line, though.

While the Senate has entered that part of the political calendar when confirmations traditionally halt, the Judiciary Committee on Thursday voted 13-7 to advance the nomination of U.S. District Judge Lucy Koh for the 9th Circuit Court of Appeals.

The cadence of judicial nominations customarily follows what’s known as the Thurmond-Leahy rule. The rule, a longstanding gentleman’s agreement among senators, prohibits confirmations of new judgeships in the months before a presidential election.

Even though Koh has advanced out of committee, it’s not clear the Californian will receive a confirmation vote on the Senate floor. Republicans could be sending the nomination out of committee halfheartedly, in an effort to appease the left while running out the clock before the Nov. 8 elections.

Still, Democrats seem intent on getting Koh confirmed regardless of the Thurmond rule.

Sen. Dianne Feinstein, D-Calif., has shepherded Koh’s nomination from the beginning. Before Thursday’s vote, the California senator heralded the judge as “a nominee with very strong, impeccable credentials, and a distinguished track record.”

But when a Republican was last in the White House, Democrats demanded observation of the Thurmond rule. Insisting the rule was apolitical, they pushed to apply it before both the 2004 and 2008 presidential elections.

“Not reflecting on any single judicial nominee or that person’s qualifications,” Sen. Dick Durbin, D-Ill., said in October of 2004, “it has been a practice and tradition in the Senate that in a presidential election year, we suspend the approval of federal judges after the nominating convention of a major party.”

Every Democrat on the Judiciary Committee voted to advance Koh’s nomination. Three Republicans joined them: Chairman Chuck Grassley of Iowa, Lindsey Graham of South Carolina, and Jeff Flake of Arizona.

While Koh’s nomination is out of committee, she is not guaranteed a confirmation vote on the floor before the next president enters the White House on Jan. 20.

Before voting for Koh, Grassley made clear his support was only to “move her nomination out of this committee” and was without “any commitment about a floor vote.”

“Passing out of committee is only a first step,” a GOP Senate aide said of Koh’s prospects for confirmation, telling The Daily Signal that “it remains to be seen what, if anything, will happen.”

Sen. Jeff Sessions, R-Ala.,  a committee member who opposed the nomination, predicted a floor vote isn’t on the horizon.

“I don’t think we will see any more [judicial] confirmations this fall, certainly not before recess,” Sessions told The Daily Signal. “That’s just the way it’s always been. We will let the election move forward,  and then confirmations will move depending on the outcome.”

Koh, the first federal district judge of Korean descent, is the fourth of Obama’s nominees to the U.S. Court of Appeals still awaiting a confirmation vote in the Senate.

The committee advanced another nominee to the 7th Circuit Court of Appeals, Donald Schott, by a nearly identical 13-7 vote June 16. Like Koh, he has not been added to the Senate’s calendar for a vote.

But after a bruising confirmation hearing in the Judiciary Committee, it would be difficult for Koh to add her name to that list. The judge’s judicial philosophy opened her up to broadsides from Sen. Thom Tillis, R-N.C., as well as Grassley.

While attending Harvard Law School, Koh wrote in its Women’s Law Journal that “minority judges still need to maintain the disguise of ‘objectivity’” in order to be taken seriously in the legal world.

“Yes, [a minority judge] is going to identify with [minorities’] experiences,” Koh wrote in 1991, “but she can’t ‘admit’ this. We’ve got to get more clever and say, look, we’re just as neutral as any 60-year-old white man.”

Pushed by Grassley for an explanation of that statement, Koh, 48, said she no longer subscribes to those views and that her experience after law school taught her that judges “must be fair and impartial to all parties in all cases.”

“I made that statement as a first-year law student 26 years ago,” she said. “I completely disagree with it.”.

After graduating law school in 1993, Koh worked as a public prosecutor and in private practice before Obama appointed her in 2010 to the U.S. District Court for the Northern District of California. The Senate confirmed her unanimously for that post.

Koh’s track record could prove a stumbling block, though.

Sen. John Cornyn, R-Texas, opposed Koh’s nomination because of her decision in a 2015 case involving the Electronic Communications Privacy Act. She ruled that the government must get a warrant before collecting data generated by mobile devices.

Ahead of the committee’s vote, Cornyn criticized her decision as “an example of judicial activism” that contradicted established law.

“Judges should not be policymakers,” Cornyn said, “substituting their views for those of the elected representatives of the American people—that would be Congress—and the written Constitution.”