The Trick Lawmakers Use to Hide Their Wasteful Spending 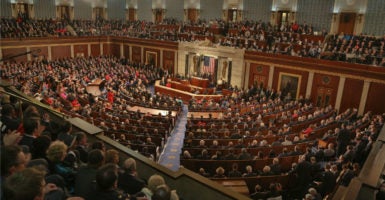 Congress, assembled here for the State of the Union, often turns to a short-term patch, known as a continuing resolution, to fund the government until reconvening in January. (Photo: Jeff Malet Photography /Newscom)

Imagine, for a moment, that you’re running a restaurant (and if you are already, congratulations). Imagine, further, that every month you serve more and more of your food, but never restock the groceries, and never come up with a plan to buy more. At some point, your restaurant is going to hit a wall: You’ll need to restock everything, all at once, for a massive sum of money, lest you go out of business.

Believe it or not, that’s pretty much the way Congress routinely funds the federal government.

The Congressional Budget Act of 1974 requires the legislative and the executive branches to agree upon a dozen different appropriations bills before the end of the fiscal year, Sept. 30. And year after year, they have failed to meet this deadline.

So, Congress often turns to a short-term patch, known as a continuing resolution, to fund the government until reconvening in January. And just as frequently, these continuing resolution bills not only fail to address wasteful spending, but break through existing spending caps, put our government on an unsustainable course, and help repeat the cycle next year.

Like so many other shenanigans on Capitol Hill, the continuing resolution is a fig leaf for unexamined spending and lack of a coherent budget.

According to Paul Winfree, director of the Thomas A. Roe Institute for Economic Policy Studies at The Heritage Foundation:

If Congress passes an unamended or clean continuing resolution for any length of time or an omnibus spending bill at the Obama-Boehner level of $1.070 trillion for fiscal year 2017, they will set themselves up to break the [Budget Control Act] spending limits for FY 2018, which is currently set by law at $1.064 trillion ($549 billion for defense, not including war spending, and $515 for non-defense spending).

Long story short: Like so many other shenanigans on Capitol Hill, the continuing resolution is a fig leaf for unexamined spending and lack of a coherent budget.

If this funding bill expires in December, it’s a signal that the leadership plans a lame-duck session with a big agenda—and they will have to agree on a bill that funds the government through next September before they go home for Christmas. This is when the terrible backroom deals are the worst.

Last week, I wrote about the dangers of lame-duck sessions, where “zombie” politicians who lose their seats still get to vote on big, expensive, and controversial bills, no longer accountable to voters. Lame ducks used to exist for emergencies, but Congress has become accustomed to filling them with last-minute spending bills and quick fixes; it takes less courage than trying to reform spending and stick to a budget.

Lame ducks used to exist for emergencies, but Congress has become accustomed to filling them with last-minute spending bills and quick fixes.

Americans need to warn Congress against a lame-duck session now, while we have the chance. We also need to demand that the appropriations process be conducted on time, out in the open, before Election Day. The Heritage Foundation has provided a handy blueprint to balance the federal budget in 2017, which means reducing nondefense discretionary spending, and shrinking government down to its constitutional limits.

Hopefully that will work until we can send Congress to home economics class, and teach ‘em how to buy the groceries.