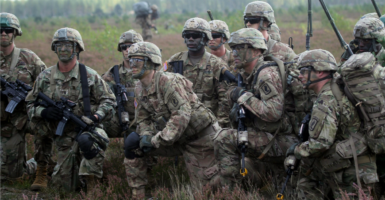 Ever since the Budget Control Act of 2011, the Obama administration has successfully fought to preserve a dollar-for-dollar link between defense and nondefense discretionary spending levels. (Photo: Valda Kalnina/EPA/Newscom)

Back in July, President Barack Obama announced that he had decided to keep more troops in Afghanistan at the end of 2016 than he had previously planned, and more than he had proposed funding in his fiscal year 2017 Overseas Contingency Operations budget request. While the decision to keep more troops in Afghanistan was a step in the right direction, it immediately raised the question of how to pay for these forces.

The day after Obama’s announcement, Secretary of Defense Ash Carter suggested that the Department of Defense might need to submit a supplemental funding request to cover the costs of the increased Afghanistan mission. This supplemental request would be categorized as “emergency spending,” just like the Louisiana flooding request.

A White House Office of Management and Budget spokeswoman publicly admitted that any funding request for Afghanistan would not be considered by itself because “any increase in funding must be shared equally between defense and nondefense.”

Some in Congress were understandably upset by this. Sen. John McCain, R-Ariz., chairman of the Senate Armed Services Committee, called it “extortion,” saying:

If the president believes that sending thousands more young Americans into war is in the national security interest of the United States, he should support the additional funding required to support those warfighters. Full stop. No caveats, no qualifications, and no strings attached.

It would seem this “extortion” only goes one way. According to the Obama administration, if the military needs increased funding to succeed in a mission, that funding increase has to be paired with unrelated domestic funding. But if additional domestic spending is needed, it apparently does not need to be paired with increased defense spending, as we witnessed with the recent Louisiana funding request.

As commander in chief, the president should take a more strategic view of the nation’s needs.

Ever since the Budget Control Act of 2011, the Obama administration has successfully fought to preserve a dollar-for-dollar link between defense and nondefense discretionary spending levels. According to Obama and his Democratic allies in Congress, every dollar added to the defense budget must be matched with a dollar added to the domestic budget.

This is an absurd, nonsensical way of budgeting that only survives in Washington. Threats to U.S. vital interests are rising and the U.S. military has been dramatically weakened under major budget cuts over the last five years, but any increase in the defense budget has to be matched with nondefense budget increases? This makes no sense.

Think about it in the context of a family budget. If one spouse wants to invest in a better, more expensive home security system due to increased crime in the neighborhood, will the other spouse refuse to agree to this funding increase without a dollar-for-dollar increase in funding toward a new car or an upgraded cable TV package? Of course not.

If threats are rising, and your security system needs to be improved, you will tighten your belt in other areas to pay for this increase. Only in Washington can a politician get away with holding a security funding increase hostage for completely unrelated domestic spending increases.

While the details of the Louisiana flooding relief request can be debated, the request shows that the Obama administration is only committed to the “dollar-for-dollar” principle when it results in growing domestic spending. When security spending is on the table, it is happy to use it as political leverage for its own priorities. Defense and nondefense should not be linked. What some call the “firewall” between defense and nondefense should be broken, and every dollar spent should be considered on its own merits.

This crazy suicide pact on spending needs to end. Afghanistan funding and other security needs should be considered on their own merits, and the defense budget overall should be increased in response to growing threats and a shrinking, weaker U.S. military. The American people deserve a reasonable budget process, not one that involves hostage-taking and extortion, or using the military as leverage for domestic agendas.