No, the Constitution Isn’t Outdated 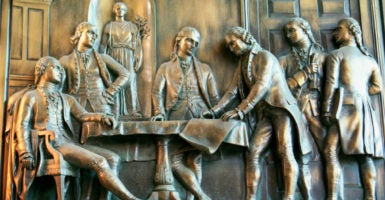 Through the Founders’ own writings contained in the Federalist Papers, notes on the proceedings of the Constitutional Convention and correspondence, thoughtful judges and legal scholars get a clear sense of the spirit behind the words on the page. (Photo: Steve Gottlieb Stock Connection Worldwide /Newscom)

This Constitution Day, we celebrate the 229th year since our Constitution’s signing. For many Americans, the durability of our founding document is a point of pride, an indication of its high quality, and a worthy reason to revere it.

But for others, such as Supreme Court Justice Ruth Bader Ginsburg, the Constitution’s age is a mark against it. Asked in a 2012 interview whether Egypt’s new government should look to other constitutions for guidance, Ginsburg replied, “I would not look to the U.S. Constitution, if I were drafting a constitution in the year 2012. I might look at the Constitution of South Africa.”

She added that Canada’s Charter of Rights and Freedoms might also be a good place to start, as it is “much more recent than the U.S. Constitution. … It dates from 1982.”

More recently, this summer, 7th Circuit Judge Richard Posner wrote in an op-ed for Slate that he “[sees] absolutely no value to … studying the Constitution.” His reasoning: “Eighteenth-century guys, however smart, could not foresee the culture, technology, etc., of the 21st century.”

The left frequently claims that political science, like the natural sciences, is continuously advancing. Accordingly, a competently crafted constitution written in the early 1980s must almost certainly be better than a constitution written in the late 1780s. After all, the framers of Canada’s charter had the benefit of nearly two centuries of societal developments that our Founders could not have foreseen.

As Richard Stengel, former president and CEO of the National Constitution Center, wrote in a splashy 2011 article in Time magazine:

Stengel’s list is instructive as it gives the reader a sense of the changes liberals think our Constitution does not adequately account for. Take for instance: “airplanes, the atom, the internal combustion engine, and antibiotics.” These all represent technological or scientific innovations unknown to the Founders that, purportedly, have some relevance to structuring a government.

Some scientific and technological changes do require that we think carefully about the Founders’ intent when they were writing the Constitution. For instance, new technologies allow police to peer into homes without physically entering them, intercept an email or a text message, or track your car from their computer back at the precinct. Whether these things constitute a search or seizure of citizens’ “houses, papers, and effects” under the Fourth Amendment is an important question the Founders do not answer for us directly.

But by no means are we merely left to guess how the Constitution speaks to these modern conditions. Through the Founders’ own writings contained in the Federalist Papers, notes on the proceedings of the Constitutional Convention and correspondence, thoughtful judges and legal scholars get a clear sense of the spirit behind the words on the page.

Given the Founders’ concern that government would use warrantless searches to harass and condemn political dissidents, it is hard to imagine James Madison or Alexander Hamilton would approve of warrantless wiretaps, drone flyovers, and email dragnets conducted by federal agencies.

Other items on Stengel’s list—sexting, miniskirts, and Lady Gaga—belong to another category of societal development liberals often refer to when questioning our Constitution’s continued relevance: shifting social norms.

The Founders knew that the societal concerns and policy questions particular to their time would eventually be resolved and new issues would arise to take their place.

What they typically forget is our Constitution was never meant to address every new cultural development nor freeze American society in place as it existed at the turn of the 18th century. The Founders knew that the societal concerns and policy questions particular to their time would eventually be resolved and new issues would arise to take their place.

While the Constitution was not meant to steer the development of American culture in every sense, the Founders did think a free society demanded certain qualities of character among the citizenry: habits of self-governance, respect for the rights of others, and reverence for the law. But within those brackets is allowed some latitude for culture to develop organically and locally without the heavy hand of government at the helm.

While the Founders took special care to ensure the Constitution’s foundation could survive new developments in technology and society, the durability of the document owes as much to what the Founders knew about human nature and worked into our foundational text as it does what they recognized they could not foresee and left to future generations.

Our Founders believed government must be strictly restrained because those attracted to political power rarely restrain themselves. The Founders knew even the power of the majority should not be total, since infringements of individual liberty authorized by 150 million voters are often no more just than those authorized by a single ruler.

When men and women sprout wings and halos, or seraphim and cherubim descend from the heavens to run our government, then it might be time to question the continued utility of our Constitution. But as long as human nature remains subject to the same failings the Founders wisely identified, we should be skeptical of liberal doctrines that allow the powerful to interpret the extent of their own power and protect only those individual liberties a bare majority approves of.

As yet, the heavens have not parted, and human nature is still as fallible as it was 229 years ago. Thankfully, our nation was blessed with a generation of men who had insight to perceive the essential character of man vis-à-vis government and the wisdom to craft institutions rooted in those unchanging realities.