Planned Parenthood Wants to Use California Bill to Silence Opposition 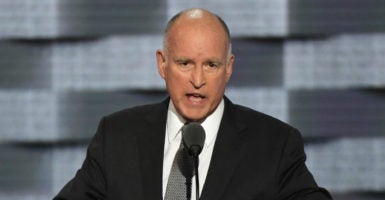 A bill that has been passed on to California Gov. Jerry Brown’s desk is designed to silence “undercover journalists” who might have reason to suspect foul play within organizations such as Planned Parenthood. (Photo: Pat Benic /UPI/Newscom)

At Planned Parenthood’s behest, the California Assembly has passed AB 1671 on to Gov. Jerry Brown’s desk.

AB 1671 amends a state anti-eavesdropping law to add criminal penalties for disclosing the confidential communications of a health care provider. The bill is designed to silence “undercover journalists” who might have reason to suspect foul play within organizations such as Planned Parenthood.

Now Gov. Brown must decide whether to expand existing state law to chill newsworthy journalism in favor of Planned Parenthood, or to continue the stance against similar abuses of the criminal law and penalties that he expressed in a 2015 letter to the state Assembly.

Because anyone who violates the provisions of AB 1671 is likely to have violated the existing state law against eavesdropping, AB 1671 seems at first blush to be superfluous. The bill merely tacks on the punishment for an intentional disclosure of the contents of confidential communications with a health care provider of fines of up to $2,500 per violation, imprisonment of up to one year or both. The bill does not ratchet up the penalty for disclosures of communications of a person in any other profession.

AB 1671 is designed to cover up potential wrongdoing by a powerful organization, one that receives tax dollars and has several times been caught engaged in nefarious conduct.

AB 1671 serves to benefit only Planned Parenthood, with no explanation for why that entity deserves special treatment through the criminal law. The California Legislature has not addressed the question of why it is any worse to disclose a confidential communication involving a health care provider than it is to disclose a recording of the conversations in a confessional, a judge’s chambers, the intimate confines of a home, or those involving persons in any other line of work.

The criminal law and penalties should apply evenly to all citizens. Because Planned Parenthood cannot justify its preferential treatment, AB 1671 stands as unadulterated cronyism.

Planned Parenthood Affiliates of California’s chief legal counsel, Beth Parker, said, “We need to have a crime against distribution” of audio or video of a health care worker’s communications—even if it conveys potential misconduct—and “[a] slap on the hand of a $2,500 fine isn’t sufficient.”

In California, however, Attorney General Kamala Harris launched an investigation into the Center for Medical Progress’ undercover recording practices, while a videographer, David Daleiden, faced criminal charges for his conduct in Texas. Those charges have since been dismissed. It seems that Planned Parenthood felt threatened enough by Daleiden’s conduct to seek to abuse the criminal law to silence any further probes into possible misconduct. And in Planned Parenthood’s view, prison is the only adequate deterrent.

Brown has until the end of September to agree or disagree with that belief.

In an October 2015 letter to the Assembly, Brown returned nine bills without his signature, because, as he put it, the legislators had found “a novel way to characterize and criminalize conduct that is already proscribed.

“This multiplication and particularization of criminal behavior,” the governor wrote, “creates increasing complexity without commensurate benefit.”

The California Senate reported that an earlier version of AB 1671 would increase complexity by introducing potential constitutional problems to the state eavesdropping law. The Senate was right.

In Burstyn v. Wilson (1952), the United States Supreme Court decided film and audio recordings that preserve and disseminate the expression of ideas and information of public importance are “included within the free speech and free press guaranty of the First and 14th amendments.”

On the one hand, California and the federal government already have limited that protection in the interests of privacy by making it a crime to eavesdrop on and disclose the contents of confidential communications without consent of the parties involved. On the other hand, the Supreme Court also expressed in Bartnicki v. Vopper (2001) that disclosure by media outlets of certain unlawfully obtained material, like Daleiden’s videos, is also worthy of First Amendment protection.

Bartnicki dealt with a radio broadcast of information that was unlawfully obtained without the broadcaster’s involvement. There, the court stated that although the state has an interest in protecting the privacy of its citizens, “privacy concerns give way when balanced against the interest in publishing matters of public importance.” AB 1671 is designed to chill the significant public interest that Bartnicki identified in “the full and free dissemination of information concerning public issues.”

Lila Rose, president of the pro-life nonprofit Live Action, noted in a public statement, “For years, undercover journalists have documented Planned Parenthood employees covering up for sex traffickers, failing to report child sexual abusers, and trafficking in baby body parts.” Now, says Rose, “rather than be more transparent with the public, Planned Parenthood wants to make it a crime for the media to publish evidence that it might be doing something illegal.”

Would AB 1671 provide commensurate benefit to justify, in Brown’s words, “multiplication and particularization” within the state criminal code? The benefit of prosecutions for disclosure of newsworthy information is clearly a one-way street that starts at the legislature and ends at Planned Parenthood. Whatever one thinks of that organization, AB 1671 shows how big private interests can abuse the criminal law for the purpose of silencing their adversaries.

Over the last several decades, California’s criminal code has grown to more than 5,000 separate provisions, covering almost every conceivable form of human misbehavior. During the same period, our jail and prison populations have exploded.

Before we keep going down this road, I think we should pause and reflect on how our system of criminal justice could be made more human, more just and more cost-effective.

The Planned Parenthood bill adds a superfluous layer of criminal liability to an existing criminal law, putting overcriminalization—the misuse and overuse of criminal law and penalties—at the front and center of AB 1671.

State lawmakers put this new twist on an old crime specifically for the benefit of one big private interest: Planned Parenthood. AB 1671 is designed to cover up potential wrongdoing by a powerful organization, one that receives tax dollars and has several times been caught engaged in nefarious conduct. For any or all of these reasons, the governor ought to veto this bill.