How Hispanics, Blacks Have Fared in Obama Economy 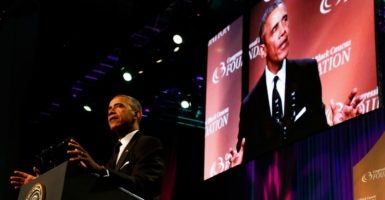 President Barack Obama speaks to the Congressional Black Caucus Foundation’s award dinner on Sept. 19, 2015. Obama will return to the awards dinner to deliver his last remarks to the group of his presidency on Sept. 17, 2016. (Photo: Aude Guerrucci/Polaris/Newscom)

President Barack Obama will be speaking this week for the last time during his presidency to annual dinners for black and Hispanic members of Congress, even as his record for the two largest minority groups in the country is at best questionable, based on government numbers.

A Census Bureau report this week found wages have climbed back to pre-recession levels in 2015, including for blacks and Hispanics. However, throughout Obama’s two terms, the highest unemployment rates continue to be among African-Americans and Hispanics, according to the Bureau of Labor Statistics.

“The black community has suffered tremendously under the president’s policies,” Cooper told The Daily Signal in a phone interview.

“The black community has suffered tremendously under the president’s policies,” Horace Cooper of @Project21News says.

“The president seems to be so proud that wages are back, but that just means the misery has endured until his last year in office,” Cooper added. “He has turned the Great Recession that should have been two to three years into five to seven years. We haven’t had full job growth for almost eight years.”

The president, not surprisingly, had a different perspective, touting the Census numbers in a White House video Tuesday. Obama said:

Incomes actually went up 5.2 percent. This is actually the biggest jump year over year since 1968. The good news is, it went up for everybody, all income groups, except those at the very, very top, all races, genders … It paints a picture of an economy that is improving, that is reducing poverty and increasing incomes. This is all a consequence of some of the smart economic policies we’ve been putting in place over the last several years.

However, the recovery has been too weak to celebrate, said James Sherk, a research fellow for labor economics at The Heritage Foundation.

“This has been the slowest recovery of the post-war era,” Sherk told The Daily Signal. “All racial groups suffered losses in the downturn that are only now being recovered.”

On Thursday, Obama is speaking to the 39th Annual Congressional Hispanic Caucus Institute Public Policy Conference and Annual Awards Gala. Then, on Saturday, he will speak at the Congressional Black Caucus Foundation’s 46th Annual Legislative Conference Phoenix Awards Dinner. Both events are in Washington.

However, a year-to-year comparison could lack precision based on a redesigned survey from the Census Bureau in 2014, which is intended to capture more income than the old survey.

The employment situation for the two demographics is more cloudy, according to Bureau of Labor Statistics reports. African-Americans are hit hard on both fronts. Hispanics have one of the highest labor force participation rates of any demographic, but also lag in employment. Labor force participation has actually declined slightly for both groups, going from 63 percent in 2008 to 61 percent for blacks during most of Obama’s time in office. Hispanics had a 68 percent workforce participation rate in 2008, but after 2010 fell to 66 percent and remained there.

Obama and progressives in general would prefer to identify various voting blocs instead of boosting economic advancement, said Michael Gonzalez, a senior fellow in foreign policy for The Heritage Foundation and author of “Race for the Future: How Conservatives Can Break the Liberal Monopoly on Hispanic Americans.”

“My main beef with progressives is blocs rather than individuals,” Gonzalez told The Daily Signal. “They want to drive a narrative that you have no power to change things and must depend on the government for help. We shouldn’t look at Hispanics as a group, that’s their mistake.”

Cooper, of Project 21, said that African-Americans did fare better during the Ronald Reagan years, and even during the 1990s with Bill Clinton, along with every other demographic, before Obamacare, the stimulus spending, and other regulation crowded out the private sector.

“There was an increase in black Americans owning homes, in high school graduations, and attending college,” Cooper said. “Today, it’s harder for entrepreneurs. If not for the digital economy, all opportunities might be eliminated. Barriers for entry into the economy are artificially higher because of the federal government.”