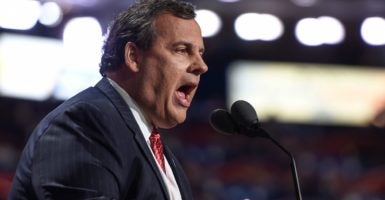 Several officials in Chris Christie’s administration agreed to shut down some (but not all) of the traffic lanes across the George Washington Bridge into New York, creating a huge traffic jam in Fort Lee. (Photo: Riccardo Savi/Sipa USA/Newscom)

This week, the infamous “Bridgegate” scandal goes to trial, with former officials in New Jersey Gov. Chris Christie’s administration facing serious charges from the U.S. Department of Justice. Not since London Bridge came falling down in 1281 has an overpass caused such a stir.

The backstory: In 2013, Christie was running for re-election. Like every other politician in that position, he was trying to round up support from other state and local pols. Fort Lee Mayor Mark Sokolich, however, declined to get on board. That is when the plot thickened.

The story is that several officials in Christie’s administration agreed to shut down some (but not all) of the traffic lanes across the George Washington Bridge into New York, creating a huge traffic jam in Fort Lee. That would “punish” Sokolich for his failure to “get in line.” It was a prank. A dirty trick. Think the end of “Animal House,” just real life.

As pranks or dirty tricks go, it was tawdry, even stupid. (Did they think no one would find out?) Christie himself described the lane closure as “abject stupidity.”

Once the story broke, Christie and his cohorts predictably took a drubbing from the notoriously tough New York media. Christie certainly paid a price in the media for the imbroglio and likely also among the electorate during his later run for the Republican nomination for the presidency.

No one has a constitutional right to avoid traffic or to use three or four lanes when approaching a bridge.

One might think that a media firestorm and political retribution were adequate penalties for a stupid, cheap, political dirty trick. But not in 21st-century America, where the U.S. Justice Department believes that political dirty tricks are actually crimes. The Justice Department has charged Bridget Kelly, Christie’s former deputy chief of staff, along with David Wildstein and William Baroni, officials of the Port Authority of New York and New Jersey, with multiple federal felonies for their parts in the Great Gridlock Shenanigans. The 37-page, 9-count indictment alleges these officials committed theft of federal government property, fraud, the deprivation of the civil rights of New Jersey residents, and that they conspired to do all of the foregoing. (If the defendants had dynamited an empty bridge, they would have committed fewer crimes.)

Wildstein pleaded guilty in 2015 to two counts of conspiracy and implicated his alleged co-conspirators. He will likely regret that because, as explained below, he pleaded guilty to nonexistent crimes.

What property did they steal? The bridge is still there—and probably the traffic, too.

What property did they misuse? The government alleges that the defendants misused “the time and services of unwitting Port Authority personnel.” Really? If that is a form of theft, then the Justice Department inspector general should investigate to make sure no DOJ employee uses a DOJ fax machine to send a permission slip to a child’s school, or uses the government’s WATS line to call a sick parent, or uses an office computer to check the scores on ESPN, or wastes away the day chatting with colleagues—or any of the other matters that go on in the federal government on a daily basis.

What was the fraud? Neither the defendants nor anyone else derived any personal financial benefit from the scheme. Was the fraud an implicit representation that politicians would not act like politicians? Puhleeze! We’re talkin’ “New Joisey” here! Besides, any DOJ prosecutor who thinks that politicians do not pull stupid stunts like this one is guilty of defrauding the federal government for telling his superiors that he is savvy enough to be a DOJ prosecutor.

The only benefit that Christie’s associates got was schadenfreude. If that is sufficient to violate the fraud statute, the Supreme Court has been wasting its time trying to interpret that law because, as Cole Porter wrote, anything goes.

Most outrageous is the civil rights charge. What civil right did the defendants violate? The constitutional right not to be ensnarled in traffic? Fuggedaboutit! Perhaps there is a constitution somewhere that includes a Traffic Clause (right after the Sanity Clause), but the American Constitution sure doesn’t.

The Constitution guarantees everyone a right to interstate migration, not interstate commuting — and certainly not speedy interstate commuting, let alone a right to “localized” driving, as the government’s indictment alleges. No one has a constitutional right to avoid traffic or to use three or four lanes when approaching a bridge. Besides, the defendants didn’t corral Fort Lee residents. There are numerous bridges, tunnels, and ferries into New York. Perhaps someone should show the prosecutors a map.

Look at this matter another way. It would not violate the Constitution for officials to funnel traffic into fewer lanes to repave the bridge. The only difference between that scenario and this one is that these officials are said to have acted with the intent to injure someone—not the commuters, however; they were just the delivery vehicle for the pain.

The defendants’ intent was to injure Mayor Sokolich—not physically, just politically—for not being a “team player.” Yes, that is a shoddy way to treat the public (which always seems to take it in the shorts whenever politicians act like, well, politicians). But the Constitution protects us against political mischief. It lets us vote the perpetrators out of office. That is the proper remedy, not a criminal prosecution.

In a case involving alleged political misconduct (a trade association’s gifts to politicians), the late Justice Antonin Scalia wrote that “a statute in this field that can linguistically be interpreted to be either a meat axe or a scalpel should reasonably be taken to be the latter.” Here, the DOJ prosecutors have gone with a scythe.

A lawyer representing Kelly wrote that “the intentional causing of traffic” has never been the subject of federal civil rights allegations. “No other federal criminal case,” according to counsel, “has been prosecuted anywhere, at any time, with facts even remotely similar to the facts there.” We haven’t looked everywhere, but, by God, we sure hope he’s right.

Last spring, the Supreme Court unanimously spanked the DOJ in McDonnell v. United States for trying to stretch the federal criminal law to punish tawdry political behavior. McDonnell was not an anomaly. It was just the latest in a series of cases (including McNally, McCormick, Sun-Diamond Growers, Skilling and Yates) in which the Supreme Court has told the Justice Department that it is up to Congress—not the DOJ—to come up with newfangled crimes and to define them with precision.

The prosecutors need to listen to the music, not just read the lyrics, in the court’s opinions. The district court should have dismissed this indictment in an opinion that read simply, “GMAB.” Were this case to result in a conviction and ultimately reach the Supreme Court, the court will need to send the DOJ to its room without supper yet again. Why? Because with this indictment the Justice Department has essentially flipped off the court.