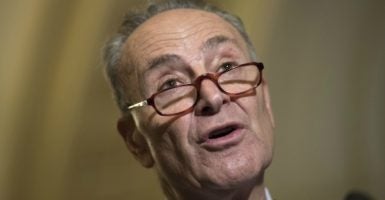 “A progressive majority on the Supreme Court is an imperative, and if I become majority leader, I will make it happen,” Sen. Chuck Schumer, D-N.Y., says. (Photo: Kevin Dietsch/UPI/Newscom)

Sen. Chuck Schumer has reminded us just how important the upcoming presidential election will be in shaping the federal judiciary, calling getting a progressive Supreme Court his “number one goal.”

“A progressive majority on the Supreme Court is an imperative, and if I become majority leader, I will make it happen,” Schumer, D-N.Y., said to attendees at a conference last week hosted by the Rev. Al Sharpton.

These statements should concern individuals with a proper understanding of the limited role of the judiciary. The next president will appoint at least one justice to the Supreme Court and could fill one-third of judgeships on the lower courts by the end of two terms.

And a “progressive” Supreme Court is not outside the realm of possibilities.

The high court has been closely divided on a number of contentious issues in recent years: the Second Amendment (Heller, McDonald), religious liberty (Hobby Lobby, Town of Greece), the First Amendment (Citizens United), racial preferences (Fisher I), and the death penalty (Glossip), among others. One vote made the difference in each of these cases, which most consider as victories for the conservative wing of the court.

Schumer specifically criticized a 2013 decision involving a 5-4 decision about voting rights. In Shelby County v. Holder, the court held that Section 4 of the Voting Right Act, which set forth a 40-year-old coverage formula laying out which states needed to get preapproval from the federal government before making any changes in their voting laws, was unconstitutional.

The court explained that Congress “did not use the record it compiled to shape a coverage formula grounded in current conditions” and that the formula had “no logical relation to the present day.”

As Roll Call reported, Schumer “predicted that the Shelby County decision on voting rights would be overturned by a Supreme Court with the kind of progressive justices he would prioritize confirming as majority leader.”

But returning to an outdated coverage formula and continuing to subject states that no longer rampantly discriminate to extra burdens can no longer be justified. In fact, if Congress had updated the coverage formula using recent registration and turnout data, none of the previously existing covered states would have remained so because the registration and turnout of black voters in those states is either on par or exceeds that of white voters.

We don’t need judges who impose their own policy predilections on the rest of society, read new rights into the Constitution that are not grounded in the text, or strain the text to achieve their desired ends. Instead, we need judges who are faithful to the text of the Constitution and of statutes and who interpret the text and structure of the law based on the original public meaning of that text at the time it was adopted.

As we have written, the fate of the federal courts rests with the next president. Yet the Senate has a critical role to play too. The president must nominate and the Senate must confirm individuals who understand the proper, limited role of the judiciary. Any nominee’s record should demonstrate that he or she will apply the Constitution and laws according to their original public meaning.

Importantly, the Senate should not rubber-stamp nominees who would be bad judges. In fact, the Senate has a duty to reject any nominee who would not uphold the Constitution.

The next election could transform the federal judiciary and impact the law for decades. We don’t need a results-oriented “progressive” Supreme Court. We need one that’s faithful to the Constitution.