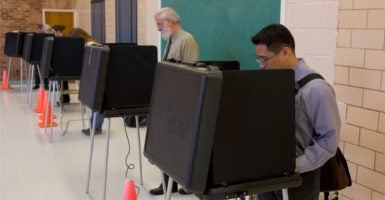 Advocates of limited government are wary of suggestions that the Obama administration is considering designating election systems, such as the one run here by Arlington County, as "critical infrastructure" subject to federal protection. (Photo: Rob Crandall/Stock Connection Worldwide/Newscom)

The federal government is mulling a decision to protect state election systems on par with national defense and the power grid, citing recent hacking efforts. But state officials and other critics worry this move, under the guise of thwarting cyberterrorists, would be a back-door means of nationalizing local election functions.

Neither the Constitution nor Congress has granted the Department of Homeland Security the authority to provide special protection to locally administered election systems, said Ilya Shapiro, senior fellow in constitutional studies at the libertarian Cato Institute.

“States regulate elections, this is different from highways or communication systems that can be legitimately regulated by the commerce clause,” he told The Daily Signal in a phone interview. “Where would they have the authority to do this?”

The commerce clause of the Constitution gives Congress the authority to regulate commerce between states and with other countries.

“For a county election official to stand up to a @DHSgov official and say no would be tough,” @HvonSpakovsky says.

The FBI recently found that someone, possibly Russians, hacked voter registration information in both Arizona and Illinois. However, most security experts and elections officials contend that hacking actual voting machines is unlikely.

After 9/11, both the USA Patriot Act of 2001 and the Homeland Security Act of 2002 established definitions of critical infrastructure as “systems and assets, whether physical or virtual, so vital to the United States that the incapacity or destruction of such systems and assets would have a debilitating impact on security, national economic security, national public health or safety, or any combination of those matters.”

A presidential directive from President George W. Bush in 2003, later superseded by one from President Barack Obama, elaborated on critical systems for maintaining the country.

The Department of Homeland Security designated 16 sectors of American society as critical infrastructure, including the energy sector, including the power grid; information technology, including maintaining the internet; and the the nation’s food and agriculture system.

But election problems would not prevent the country from functioning, said Brad Smith, a law professor at Capital University.

“It’s not really a catastrophe if we are down a couple of members of the House or the Senate. Even presidential races, [such as in] 2000, 1876, were resolved,” Smith told The Daily Signal in a phone interview. “For people in Washington, it’s hard to accept that a delayed election result wouldn’t be like the power grid failing and people dying because they can’t get medical care, or the internet going down and no one can do business and access funds.” (Chart by Kelsey Lucas/Visualsey for The Daily Signal)

DHS protection of election systems could be necessary under certain circumstances, said David Inserra, policy analyst for homeland security at The Heritage Foundation.

“If there is evidence that indicates voting is facing systematic cyber attacks that could compromise votes, then the designation should be considered, but I don’t think it needs the classification of critical infrastructure,” Inserra told The Daily Signal. “Even Secretary Johnson said the department is investigating and has not seen a serious threat.”

The National Association of Secretaries of State, made up of officials who oversee elections in their states, doesn’t have a position on designating election systems as critical infrastructure. The organization’s spokesman, Kay Stimson, told The Daily Signal that state election officials still want to know what it would mean for their states in a practical sense.

However, Georgia Secretary of State Brian Kemp, a Republican member of the association’s Cybersecurity Working Group, is among those taking a firm stand against DHS stepping in, Politico reported. Vermont Secretary of State Jim Condos, a Democrat, told Politico he was wary about the federal government getting its “nose under the tent” of states’ responsibility to oversee elections.

A Department of Homeland Security spokesman said the agency doesn’t plan an announcement on whether it will designate election systems as critical infrastructure. The spokesman referred to comments Johnson made Thursday at an Atlantic forum, when he said:

It would be very difficult to alter the [vote] count, but we are concerned about bad cyberactors, general state actors, hacktivists, criminals that intrude into [the] internet presence of state election officials generally, and so, we’re offering assistance to these officials. ... It does not mean a federal takeover of state election systems or state elections, or even national elections. We don’t have the authority to do that. What we can do in homeland security, in cybersecurity, is offer assistance when people ask for it.

“It’s highly improbable at best that a national election could be hacked,” Connecticut Secretary of the State Denise Merrill, president of the national group, said last month during a press conference. “First of all, there is no national system of elections. Our election system is extremely decentralized. It is run [individually] by all 50 states and within those states, the counties are really responsible.”

“There are 9,000 different election jurisdictions,” he said. “Voting machines are not connected to a network.”

Shapiro said he suspects the Obama administration has another motivation.

“Jeh Johnson floated this and senior administration officials don’t float things haphazardly,” Shapiro said in a phone interview with The Daily Signal. “This could be a way for the federal government to work around the Shelby County decision. It could be about cybersecurity, but also about [what the administration considers] protecting the right to vote.”

Shapiro was referring to the Supreme Court’s decision in the case of Shelby County vs. Holder. That ruling came after the Justice Department took numerous actions to block state voter ID laws, such as requiring persons to show a driver’s license before they can vote.

The high court’s decision left in place bans on impediments to voting such as literacy tests. But it also determined some of the four-decade-old voting rights law—in which the federal government evaluated a state’s compliance based on minority voter turnout—is not applicable today.

Federal officials could try to use a critical infrastructure designation for election systems to try to convince Congress that elections should be centralized, said Hans von Spakovsky, a senior legal fellow at The Heritage Foundation who studies election issues. Von Spakovsky told The Daily Signal:

Homeland Security doesn’t have the legal authority to regulate whatever it designates as critical infrastructure, but it could be used as an excuse to say to local jurisdictions: You should do this or you shouldn’t do this. For a county election official to stand up to a U.S. Department of Homeland Security official and say no would be tough.

On Sept. 1, Investor’s Business Daily editorialized that such a designation by the federal government would be “nationalizing” elections:

This is not just a bad idea; it is dangerous. America's polling functions have long been managed at the state and local level, to ensure that our mammoth federal government doesn't get involved. It should stay that way. This government has stood by as an unprecedented series of cyberattacks have stolen our secrets and endangered our security. We should give them more power?

Letting our elephantine government get its giant proboscis under the tent flap for reasons of ‘national interest’ is opening up the possibility of political meddling in elections by government officials—either through actual intervention in the running and management of polling places, or by clever regulation that favors one party over another.