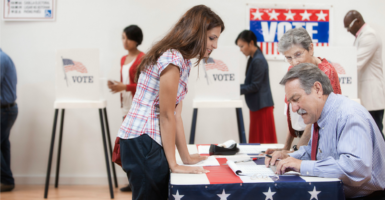 Although we are required to produce valid IDs every day in order to drive, purchase alcohol, or access welfare benefits, liberals continue to push back against ID requirements to cast a ballot, often citing fears of discrimination. (Photo: Hill Street Studios Blend Images/Newscom)

With 56 days to go until the election, you can bet voter identification requirements will increasingly be a major topic of conversation.

Just this past weekend, a federal appeals court overturned proof-of-citizenship requirements for voter registration in three states. As voters prepare to head to the booths in just a few short weeks, the debate will only heat up. Thankfully, those of us who support voter ID laws have solid logic on our side. Although we are required to produce valid IDs every day in order to drive, purchase alcohol, or access welfare benefits, liberals continue to push back against ID requirements to cast a ballot, often citing fears of discrimination.

It’s important for you to be able to make the case for voter ID laws when you find yourself in conversation with someone who considers them unfair. Voter ID requirements are essential to fair and free elections, and you have a number of reasonable talking points on your side.

Follow these three simple steps to tackle a discussion with those who are adverse to voter ID laws.

Start with the areas where we agree.

We can all agree that we want free and fair elections, as guaranteed by our democratic republic. That said, it must be reasonable to enact certain policies that safeguard the election process.

Everyone has to go through the same process to obtain a valid ID, which makes the ID the great equalizer. Your ID says who you are and certifies that you met a series of requirements in order to acquire it.

There are many unquestioned restrictions on voting currently in place, such as age requirements (a voter must be at least 18 years old) and U.S. citizenship. It only seems reasonable that those seeking to cast a vote should have to show a valid ID to prove they meet the requirements assigned.

Regardless of policy preference, both sides want corruption and illegal practices out of the voting box. Nobody likes a cheater. Rules are only useful if they are enacted. A valid ID does just that.

Cite examples to prove your point. It’s pretty hard to deny numbers and anecdotes, so use both to your benefit.

A perennial anecdote for those fighting voter ID fraud is how many dead people continue to show up at the ballot box year after year. To take just one example, The Daily Signal recently reported on the voter fraud taking place in California. An “investigation revealed that 265 deceased persons voted in Southern California, 215 of them in Los Angeles County.” Voter ID laws would go a long way to prevent this from happening.

Using comparisons in your examples can also help you make your case. Think of all the other activities—many of them far less impactful than voting—that require you to show identification. Getting a library card, buying a beer, picking up baseball tickets at will call, applying for food stamps, renting a car, obtaining a fishing license, purchasing NyQuil—the list goes on and on.

We whip out an ID for daily entertainment and responsibilities without giving it a second thought. Surely we can expect to do so for such an important action as electing the president of our country and leader of the free world.

Remember that your argument is only as successful as your words. Words matter.

Those who oppose voter ID laws often feel they have ownership of the “emotional” or “compassionate” side of the debate. Use their language to help them see why this isn’t so. Not only are voter ID laws perfectly fair, they actually safeguard equal opportunity.

When the stakes are as high as an election, it’s more than fair to take the steps necessary to prevent fraud and abuse—both of which are highly unfair.

The bottom line? Every eligible citizen’s vote should be guaranteed, not stolen or diluted by thieves or fraudsters.

Whether you’re talking to someone who opposes voter ID laws or trying to explain the issue to someone who doesn’t see its importance, you need to use the right words and examples to convince them.

After all, voting is not only a great honor, it is a great responsibility that should be taken seriously. So many brave men and women have died fighting for the right we have to vote. Showing an ID is the least we can do to honor their sacrifice and carry out our civic duty responsibly.